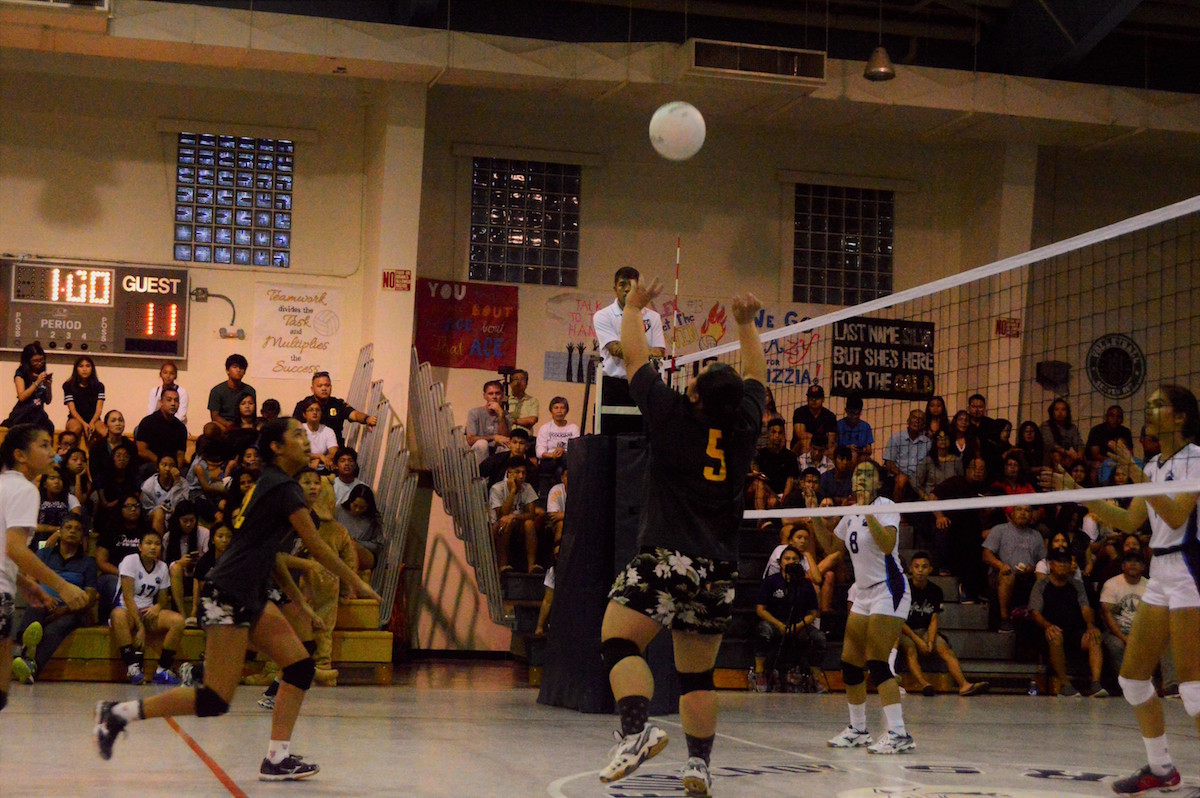 A rivalry rematch between two girls volleyball powerhouses ensued in Agana as the 8-3 Cougars hosted the 8-3 GW Geckos Saturday night. The Cougars spoiled the Geckos home opener earlier this season in Mangilao with Academy coming out on top in three sets. The Geckos exacted revenge with a three set victory 17-25, 25-17, 25-20 in the season’s second go-around.

The Cougars came out seemingly the more prepared team as they were able to waltz through the first set pretty easily, dominating on both sides of the ball. The second set is where GW would find some momentum as they rode the hot hand of Callia Conception.

The Geckos outlasted the cheers from the home crowd to take the second and force a deciding set.

Wendy’s Players of the Game Kiersten Santos and Callia Concepcion.

Eager to return a loss to Academy, the GW Geckos started the game with intensity. Academy’s middle line was solid throughout the early goings as they were able to fend off whatever the Gecko offense dished out. GW struggled offensively and though they were able to pass well, the purple-and-gold struggled to finish at the net.

The result costed them the opening set. Cougars dominated possession and the front as they ran away with a 25-17 win.

The Geckos, however, made adjustments and found some rhythm in the second.

“We told them to relax and we can get through this, and have fun,” Callia Conception said she told her squad. “Just play our game!”

The pep talked worked as Conception was huge at the net for the purple-and-gold getting big stuffs that could have easily gone the Cougar’s way. Academy’s Laressa Halladay was a highlight for the Cougars in the second.

Halladay notched 4 kills in the second set alone and also came up with some big blocks at the front line. Geckos prevail 25-17 to force a deciding set.

The third set summed up the entire night perfectly. Both sides, knowing what’s at stake, came out focused. Tori Smith was locked in for the Cougars. Smith, the vocal leader, was all over the court getting diggs, kills, and blocks.

Kierston Santos for GW came in clutch for her team late. Santos paired with Callia Conception anchored a very driven Gecko offense. Santos had three kills of the last five GW points which helped lift the Geckos to take the match in three sets.