The GW Geckos had a lot of football to get out of their system after not being able to hit the field in Week 1 of the IIAAG season, which most likely explains their offensive explosion Saturday morning where they defeated the home team Southern Dolphins 27-0. 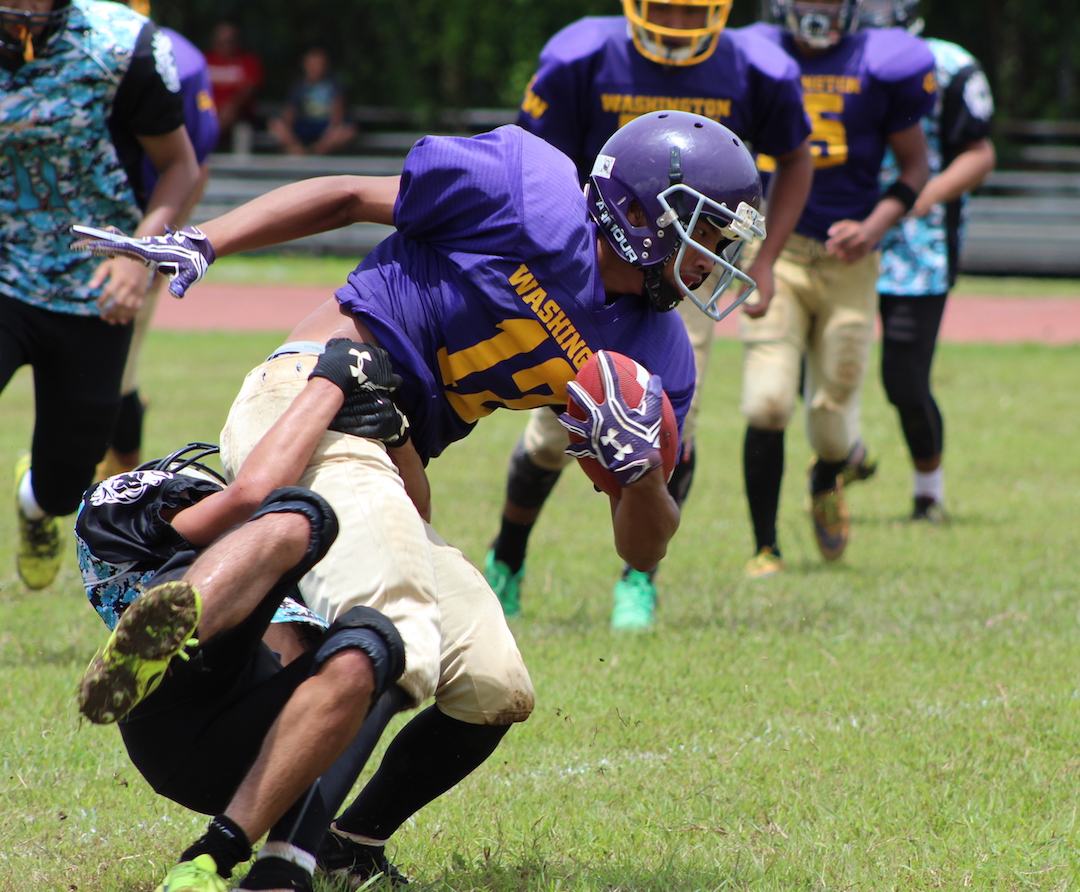 The GW Geckos had a lot of football to get out of their system after not being able to hit the field in Week 1 of the IIAAG season, which most likely explains their offensive explosion Saturday morning where they defeated the home team Southern Dolphins 27-0.

GW’s choice of attack was through the air where they scored three of the days four touchdowns. The blazing sun didn’t slow down the Gecko pass attack with receiver Aaron Jamanila hauling in nine catches to pair with a 100+ yard game.

“We came more than ready to play today,” said Jamanila of his team making up for loss game time. “I just have to continue to keep working hard. We have fun out there, and that’s the most important thing.”

Sophomore quarterback Enrique ‘Ricky’ Macias made as good a high school debut as any by tossing two scores, running for a touchdown and converting all three of his PAT’s. The busy workload is nothing new for Macias after piloting the Raiders during his GNYFF years. He’s now taken the role of his older brother Isiah Macias, who was a ‘do it all’ player for the Geckos as well.

“I want to try and be better than him,” said Ricky on being the next Macias in line. “Today’s win was all because of my line. My bond with my receivers is also really strong.”

Wendy’s Players of the Game Ricky Macias and Aaron Jamanila.

GW scored on their opening drive in style after faking a punt at the 42-yard line. Punter Florencio Untalan corralled the long snap and immediately looked down field and spotted a wide-open Jamanila, with the two connecting on the 42-yard touchdown for a quick 7-0 lead.

Untalan started to get into a groove by hitting three straight passes before hitting Jamanila in the end zone for a 15-yard score, going up 14-0 in the 2nd quarter.

Macias then connected with Untalan for a 12-yard score just before the half to get up 21-0 while the Dolphin offense had trouble getting going, being unable to break inside the Gecko 40.

The pair didn’t slow down in the second half as Macias opened up the Gecko drive by hitting Jamanila on three straight passes before running one in himself from the goal line. Jamanila racked up 46 yards on the drive, getting stopped just a yard shy of his third touchdown, which Macias later converted.

Southern will travel up North to face the Okkodo Bulldogs next Friday night at 7 pm while GW will host the Tiyan Titans next Saturday at the UOG Field at 3pm.

Dolphin Noah Rosalin darts up the right side for a first down in the 1st quarter. (photo by Robert Balajadia)

Down in front: Gecko Aaron Jamnila hauls in a big catch that turned into a touchdown on a fake punt. (photo by Robert Balajadia)