Saturday featured an unfamiliar situation for the five-time defending GWTFL Champion’s Team Legacy as they fell behind to a sparky Island Stunnerz squad 8-0 in the first quarter. Cooler heads prevailed for Legacy as they ran off 28 unanswered points to earn a 28-8 win to stay unbeaten (3-0) while handing the Stunnerz their first season loss (2-1). 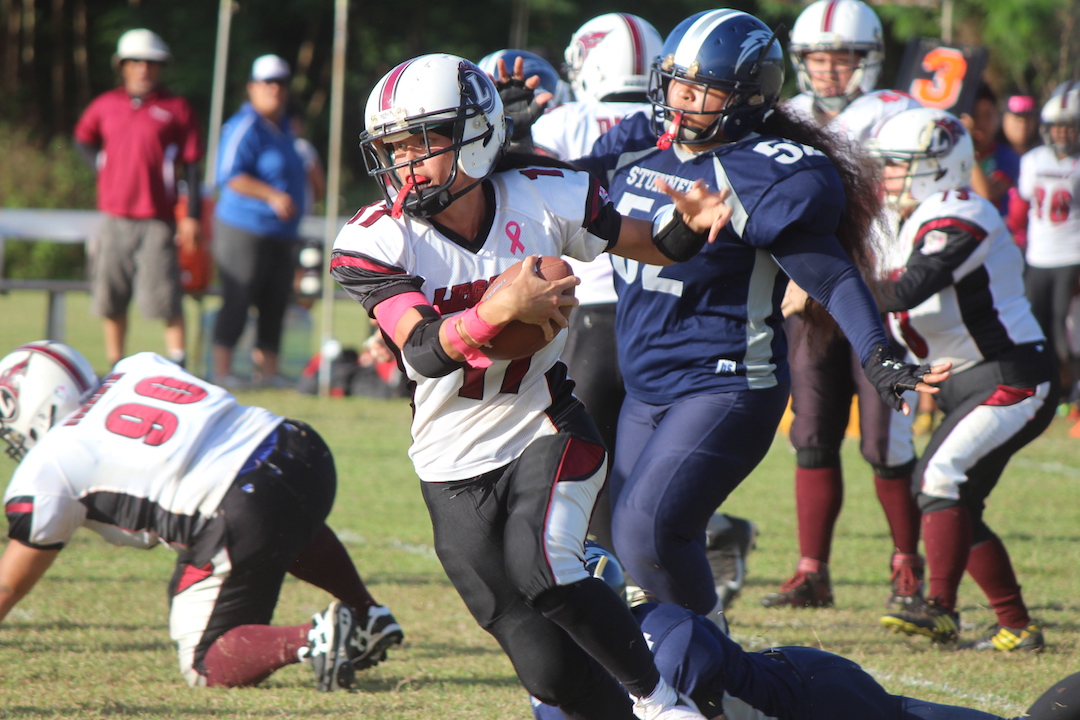 Saturday featured an unfamiliar situation for the five-time defending GWTFL Champion’s Team Legacy as they fell behind to a sparky Island Stunnerz squad 8-0 in the first quarter. Cooler heads prevailed for Legacy as they ran off 28 unanswered points to earn a 28-8 win to stay unbeaten (3-0) while handing the Stunnerz their first season loss (2-1).

Four different Legacy members scored touchdowns, including scores from Jalana Garcia, Dana Benavente, Lang Rivera and Ewy Malacca. Three of the four touchdowns were of the “big play” variety of over 50+ yards.

But before their first score, the Stunnerz and explosive running back Dani Vaughn struck first blood from 11 yards out on a touchdown run to the outside. A successful two-point conversion from Lani Jackson to Lorraine Santos gave the Stunnerz an 8-0 lead.

“They have a strong defensive line and a good offense, but we knew that we just had to step up our game. We needed a total team effort to stop them and we didn’t have that in the beginning,” said Legacy’s Benavente.

Just before the quarter ended, rookie Jalana Garcia sprinted free for a 55-yard touchdown run, but a failed conversion kept the score in favor of the Stunnerz 8-6 at halftime.

Early in the 3rd quarter, Benavente made her move for a 50-yard score on a scamper to the weak side of the defense to give Legacy a 12-8 lead. Linebacker Kineshia Flores converted on the two-point conversion as Legacy regained control to take a 14-8.

A few strong defensive stops made Legacy look much like their dominant selves in the second half as they quickly scored in he 4th quarter off a goal line score from Lang Rivera to go up 22-8. The Stunnerz attempted to strike from the air to speed up a comeback, but Vaughn’s single reception was only good enough to get them just past midfield.

A turnover on downs in the final four minutes gave Legacy the final possession as Malacca ran through the tackles for a 57-yard score.

“We know we’re a second half team. We got together at halftime and really came together, played what we practiced and pulled through together,” said Benavente.

Sindalu 20, Saints 18 : A 27-yard go-ahead touchdown pass from Sindalu’s Chelsea Gofigan to receiver Erica Blas in the final minutes proved to be the game winner in an exciting back-and-forth between the two teams.

Deniece Hoya takes a handoff up the left side of the defense. (photo by Robert Balajadia)

Dani Vaughn shows speed as she beats the Legacy defense to the outside. (photo by Robert Balajadia)

Kineshia Flores pounces on a free ball to give Legacy the opening kick off. (photo by Robert Balajadia)