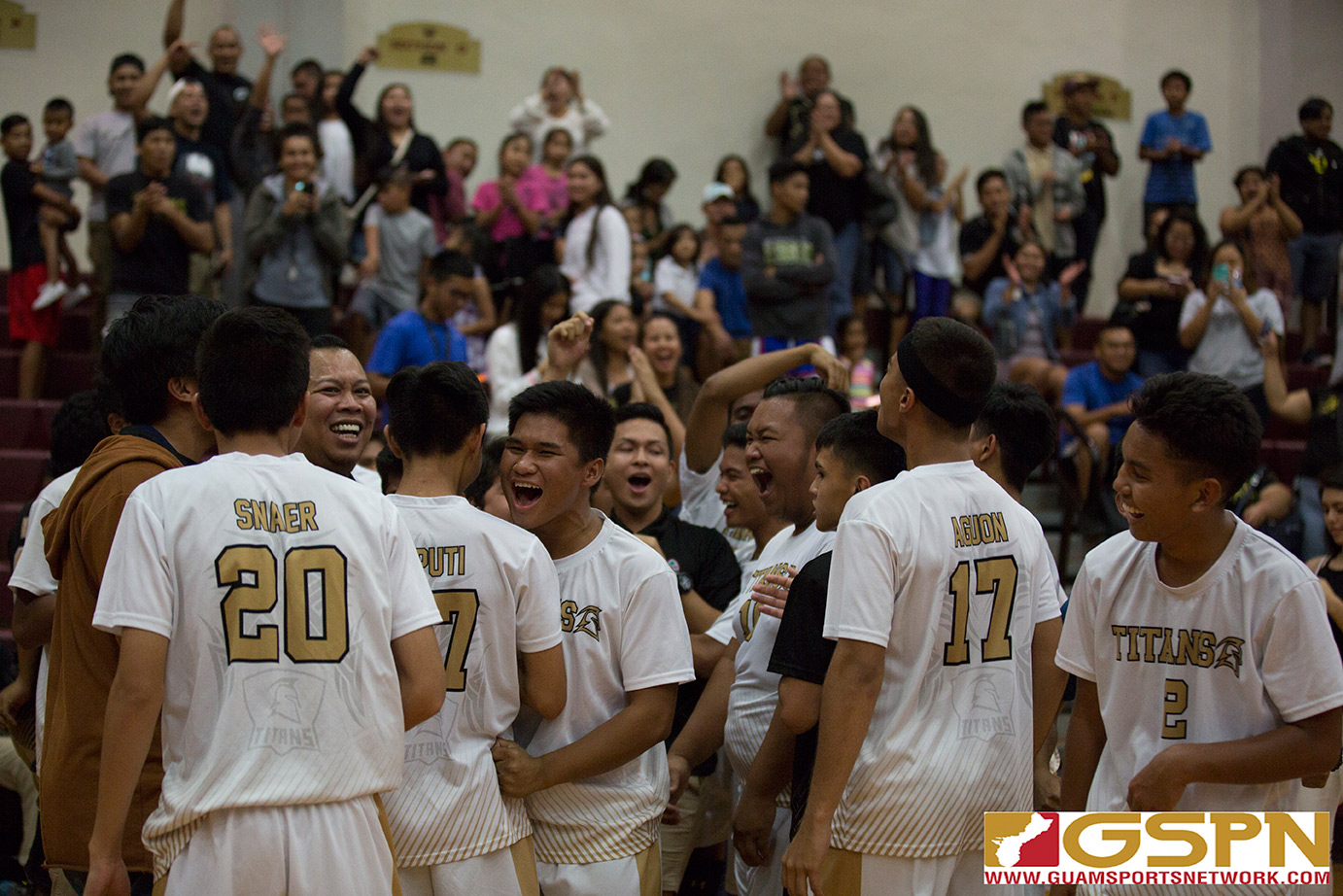 “What a game!,” muttered a fan as he exited the FD Phoenix Center after the IIAAG Boys High School Volleyball semifinal game between the 2nd-seed FD Friars and the 3rd-seed Tiyan Titans. The game went five sets with the Titans stamping their ticket to the championship game with a 24-26, 25-23, 28-26, 15-25, 15-11 victory.

“We’ve come a long way. I give much of the credit to coach (Rod) Pama for getting everyone together to not only gel as a team, but as a family,” said senior setter Johnsey Hagel.

The evenly matched teams went at it from the opening set going to a deuce with the Friars taking the opener 26-24. IIAAG First Team All-Islander Aidan McDonald had eight monstrous kills in the opening set to give the defending champions a 1-0 advantage.

The Titans answered in the second set taking an 8-2 advantage with setter Hagel and outside hitter Jude Cruz leading the way. The Friars stormed back to tie the game at 18-18 with Vince Leon Guerrero making plays at the net. The Titans’ Giovanni Manglona came up huge with a kill and later served four straight points to go up 22-18.

McDonald recorded another kill and Rico Castro came up with a huge block to cut the lead in half to trail 23-21. Hagel went to outside hitter Ramil Padigos to give the Titans a 24-23 advantage. The Titans get perhaps a season-saving play from middle man Neil Ericsson for the final kill to win the second set 25-23.

The crucial third set found the Titans going ahead again 11-7 with Richard Santos recording two early kills. The Friars again clawed back into the game going to Leon Guerrero to go up 24-23. Manglona made a heads up play to push the match to deuce, deadlocked at 24-24. The Friars took game-point advantage with another kill from Leon Guerrero but Manglona again answers with a dink to tie the game at 25-25.

The Friars commited a crucial hitting error but that was later erased with FD’s Kyle Gaitan recording a kill to tie the game at 26-26. The Titans remained calm and let FD commit the errors as they stood their ground with good defense to take two straight points and a 28-26 third set victory.

The Friars had their backs against the ropes and responded to coach Steve Pangelinan’s instructions to take the fourth set convincingly 25-15. Noah Diaz had three kills in the fourth set as the match went into a sudden death fifth set.

The Friars never gave up and senior Leon Guerrero recorded two kills and a block to help the Friars go on a 5-0 run. The Friars’ Joseph Connelly followed up with an ace to get Friar nation cheering for the comeback.

But the young Titans did not buckle under the pressure with Padigos, Manglona, and Cruz coming up huge to end the Friars’ run. Cruz recorded the final kill as the team celebrated with coach Pama.

Padigos had 14 kills to lead the Titans, Manglona had 13 kills and three blocks. McDonald had a game-high 22 kills for the Friars, Leon Guerrero had 16 kills. The Titans still managed to take the victory despite committing 15 service errors, FD had 10.

After losing to FD in the regular season, Hagel said his team made some adjustments in the playoffs.

“FD is a great team and they have big blockers, I did my best to set the outside to give the guys a good angle to make kills.”

“This is a good win and we proved a lot to ourselves that we can compete with the other big teams. We may not have the size (height) or the hardest hitters but we work with what we got and use it to the best of our abilities,” said Cruz.

Cruz suffered a pair of injuries during the season with an ankle and a shoulder injury but his presence on the court helped the Titans claim victory.

The Titans will play for their first boys team championship in the school’s young history. They will play against the winner of the Okkodo vs Harvest semifinal match which takes place Tuesday night.

“We want to thank the THS community for coming together tonight and supporting us, it means so much,” said Hagel.

“I remember our first game when we first started; there was only about five people watching us and now we have lots of friends and family coming to our game. The support helped us tonightand we are excited to be in the championship game,” said Cruz.

The championship will take place this Saturday night at the UOG Calvo Field House.