EAGLES HEADED TO FINALS WITH WIN OVER BULLDOGS

Playing host to the Okkodo Bulldogs, the Harvest Christian Academy Eagles were one win from reaching the finals in the IIAAG High School Boys Volleyball League. Tuesday night, inside the Eagle’s nest in Maite the visiting Bulldogs were stifled as they couldn’t find an answer to upset the league’s top seed. 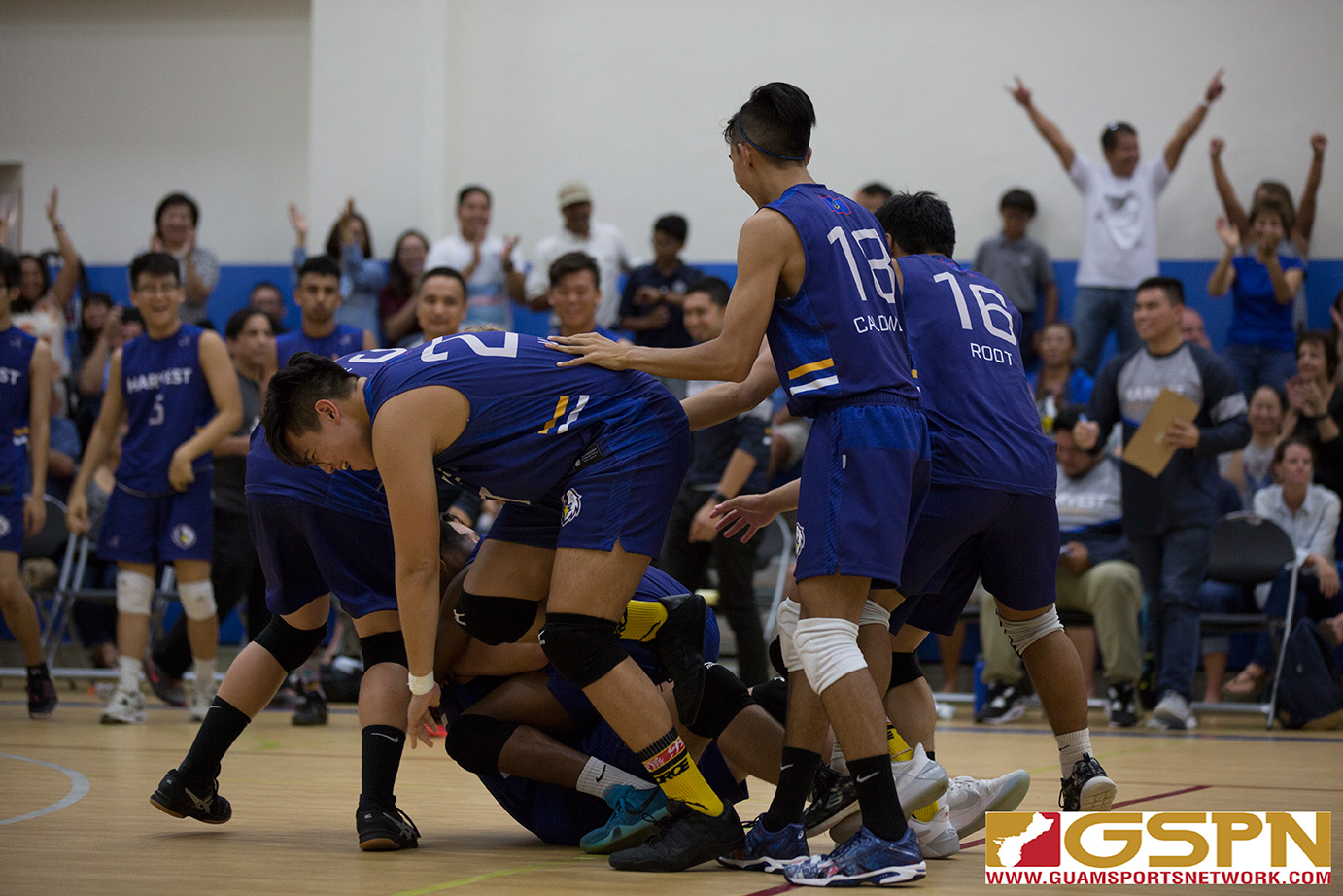 Playing host to the Okkodo Bulldogs, the Harvest Christian Academy Eagles were one win from reaching the finals in the IIAAG High School Boys Volleyball League. Tuesday night, inside the Eagles nest in Maite the visiting Bulldogs were stifled as they couldn’t find an answer to upset the league’s top seed.

After the final point was recorded, it was the Eagles who cruised to a 25-20, 25-20, 25-18 victory. The win sets up a date on Saturday that will feature the Eagles and Tiyan Titans. Tiyan defeated the defending champion FD Friars in a five-set thriller Monday night in the other semifinal.

“We came out ready to play and ready to execute what we always work hard on at practice,” said eventual Co-Player of the Game Mason Caldwell. “The win was great tonight, but we still have unfinished business as we still have one more game to play against a very good Titans team.”

Harvest opened the game with a quick 5-0 lead behind an ace from Chase Keith and numerous Bulldog errors. However, after settling down a bit, Okkodo eventually would equalize the game at 7-7. Not willing to keep the game close, the Eagles’ Clay Mitchell recorded two blocks and a kill that helped his team rebuild a 12-7 lead.

Later in the opening set, the Eagles went on a seven-point rally that gave them a commanding 23-11 lead. League MVP Sean Evans and Allen Kong led the surge combining for five kills. Just as things looked to be finished, the Bulldogs responded with nine unanswered points due mainly to costly Eagle errors to pull within (23-20) three. However, that was as close as they would get as an error followed by a Caldwell kill closed out the set.

The start of the second set witnessed four different Eagles recording three kills and an ace to jump out to a quick 4-0 lead and continue the barrage. A rattled Okkodo team managed to squeak in two points backed by a kill from Shannon Enriquez. However, the Eagles showed everyone why they were the top team in the league and would eventually build a commanding 14-3 lead backed by the hitting of Caldwell and defensive stops by Clay Mitchell.

Wendy’s Players of the Game Mason Caldwell and Clay Mitchell.

Down 19-11 late in the second set, Okkodo put up a bit of a fight combined with Harvest errors to narrow the gap after going on a 7-4 run making it a 23-18 game. With their home crowd backing, the Eagles sealed the set to go up two with a thunderous kill from Mitchell.

“Ending the second set with a kill just gave me a confidence to play on and just keeping working hard,” said Mitchell. “We just can’t let our guard down against any team and we had to keep bringing it to Okkodo because they never stopped fighting.”

An error-plagued third set would keep the match almost equal for most of the first half. It wasn’t until (12-12) midway through when four Okkodo errors, an ace by Keith and a kill by Evans gave Harvest the 18-12 lead. For the remainder of the third, Okkodo would tack on six points. However, the efforts fell short as Mitchell, Caldwell and Kobe Sotelo led the final rally to give the Eagles the last seven points they needed to clinch a championship birth.

“These boys, this team is awesome and they never seem to stop amazing me on what they are capable of doing,” said Harvest head coach Kevin Inafuku. “Everyone stepped up and played their respective roles and some a little more than expected. We have one more game and no matter the outcome I’m extremely proud and grateful for having these bunch of players.”

The championship game is slated for Saturday night at 7 pm at the UOG Calvo Field House as the unbeaten and top-seeded Eagles take on the 3rd-seeded Titans. Tiyan lost only two games in the regular season – to the Eagles and Friars.

The 3rd place game between the Bulldogs and Friars kicks off at 5:30 pm.

Eagles Clay Mitchell proves too strong on a block with two hands. (photo by Michel Ebio)

The Eagles prove too strong as they deny another Bulldog kill. (photo by Michael Ebio)

Eagle Mason Caldwell fires away for a kill in the 2nd set. (photo by Michael Ebio)