KNIGHTS KNOCK BULLDOGS OUT IN OPENING ROUND

The opening round of the IIAAG girls soccer playoffs began Wednesday evening and the 8th seeded St. John’s Knights played host to the 9th seeded Okkodo Bulldogs in a tale of two halves. After trailing 1-0 in the first half, Knight Jenna Han went for two scores to complete the comeback for a 2-1 win. 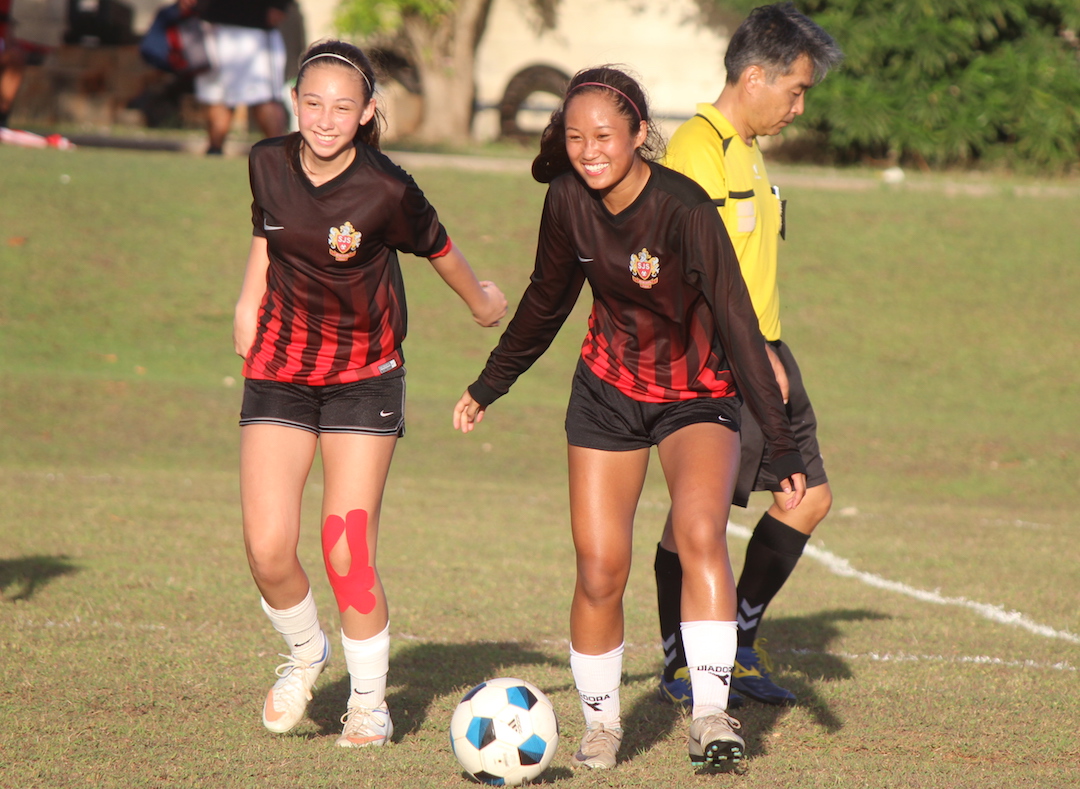 The opening round of the IIAAG girls soccer playoffs began Wednesday evening and the 8th seeded St. John’s Knights played host to the 9th seeded Okkodo Bulldogs in a tale of two halves. After trailing 1-0 in the first half, Knight Jenna Han went for two scores to complete the comeback for a 2-1 win.

Jenna, who said she’s more dangerous on a breakaway than her basketball legend dad Jin is behind the three-point line, got over twice as many touches in the second half than she did in the first. A good game plan by coach Ross Awa and willing teammates set the stage for Han.

“The game plan changed from moving me from mid-wing and center-forward to left wing,” said Han on the swap.

Han’s score in the 56th minute tied the game 1-1 and opportunity knocked once again in the 64th minute.

A bouncing ball inside the box with a mess of Bulldog defenders trying to clear it made for a difficult situation for Okkodo’s goalie Shermia Cruz. In the scramble, a handball was committed by the Bulldogs that set up a penalty kick.

Han put her shot to the right side, just beating the diving Cruz for the game-breaking score.

Okkodo’s offense looked strong netting the games first goal in the opening 10 minutes. Bulldog midfielder Ari Cruz weaved a pretty through ball between two Knights to set up a breakaway for teammate Joane Opolentisima, who tapped in a right footer past keeper Hana Fernandez to go up 1-0.

Even though facing the halftime deficit, the Knights never wavered.

The Knights used a bulkier backline defense to keep the Bulldog scorers away from the box allowing just five shots at goal in the second half.

Up next for the Knights are the GW Geckos and their lethal scoring triple-threat on Saturday. The odds are stacked against the young St. John’s team, but Han explained their first battle begins in huddle.

“We first have to believe in ourselves. We got beaten by them in the quarterfinals last year too, so this is a chance for us to make a comeback and I hope we can defeat them,” said Han.

Knight Hallie Wigsten leaps up for a header. (photo by Robert Balajadia)

Freshman Hallie Wigsten drops back on defense to clear a ball. (photo by Robert Balajadia)

Knight keeper Hana Fernandez scoops up a save in the early minutes of the game. (photo by Robert Balajadia)