A pivotal showdown between the Tiyan Titans and FD Friars Saturday in IIAAG baseball will have to be played another date, if at all even. 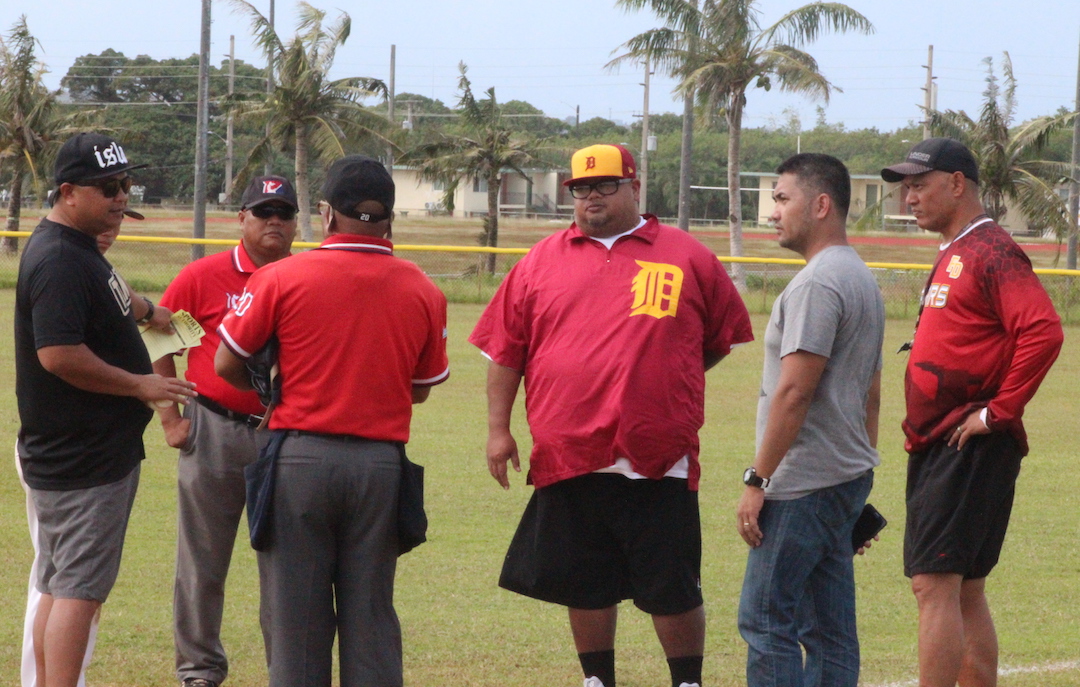 A pivotal showdown between the Tiyan Titans and FD Friars Saturday in IIAAG baseball will have to be played another date, if at all even.

In one of the more bizarre reasons for a games postponement, the game scheduled to start at 2 pm was delayed due to a conflict of interest. One of the umpires calling the game has a son who plays for the Titans in which FD refused to field their players.

After a 15-minute deliberation process, the officials called the game for it’s postponement. Both athletic directors, from FD and Tiyan, were on hand and all the necessary steps were taken before the games official decision.

There is a IIAAG ruling that the officials cannot officiate a game if they have close relatives on either of the opposing teams.

“It’s nothing personal against the umpire or his child, it’s just unfortunate that he was scheduled to be here by the coordinators. We don’t want to let a conflict of interest dictate a game, whether or not it would have had any implication; we don’t want to play to see. We’re disappointed that the league didn’t see this, but hopefully somewhere down the line it gets corrected,” said Friars coach Pat Leon Guerrero.

What was at stake for both teams in Saturdays showdown? Sole possession of 1st place as well as possible grounds in the MVP race as Friar Cooper Paulino and Tiyan’s Mark Laanan are certainly in the conversation.

From the umpire side

The regular schedule for the game was set to be at 10 am, like all Saturday games have been, but there was a request that the game be moved to 2 pm instead. The late change forced Justin Bennett, head of the GABA Umpire Coordinator, to find a last minute fill in.

“IIAAG has created many difficult scheduling conflicts and has double booked games on several dates. On Saturday, December 2nd the same date as this game they scheduled a triple header at Okkodo at 10, 12 and 3 as well as a 10am games at Guam High. Then the last minute time change from 10am to 2pm at GW between FD and Tiyan,” stated Bennett.

The issue with the umpire having his child play in a game he is officiating came up three years ago, but then President Marty Boudreau had given the O.K.

“Martin Boudreau advised he could do Tiyan games on the bases when no other official was available. With that being said, I schedule him to Tiyan games as a very last resort. Again the last minute schedule change from 10 am to 2 pm created the need to schedule him to this game,” added Bennett.

There has not been an official date set for the postponed game, but given that there is only a week left in the regular season with the Titans and Friars both playing two games during the week, that game hangs in the balance. The playoffs are scheduled to begin December 13th.

“This issue really shouldn’t have been an issue to begin with if the officials read the bylaws. Maybe that’s where the problem started. The rules are there for a reason and this is one of those rules that should have been followed. The second issue here is that the IIAAG on schedule changes always confirms with the head of the officials if the change can be made based on if they can have officials. NO games are rescheduled without the confirmation from the officials that they will have people there to officiate. So blaming changes and this issue on the IIAAG is laughable because Justin Bennett himself has to confirm that he has officials for those days or the game won’t happen. So why would the league schedule games without confirming First with Justin. If it’s a last minute change and the IIAAG baseball commissioner calls Justin’s and he says they don’t have officials for that game then the game gets rescheduled. If it’s rescheduled then Justin as the head of the officials gave the green light. It’s that simple. There were games that were on the official schedule since the beginning of the season that had to be “rescheduled” because they didn’t have officials available for that game. So if a regular scheduled game had to be postponed because they didn’t have sufficient officials, why would he blame last minute changes and a scheduling conflict on the league when he knows that we can’t play without officials? If he signs off on the games then he takes full responsibility to ensure that they are staffed with officials. Again, this is an issue that shouldn’t have been if the bylaws were followed.”