The Island Stunnerz defeated the Lady Saints Saturday Morning at the UOG field, 24-0, in the team’s last game of the regular season of the GWTFL with playoffs slated for next weekend. 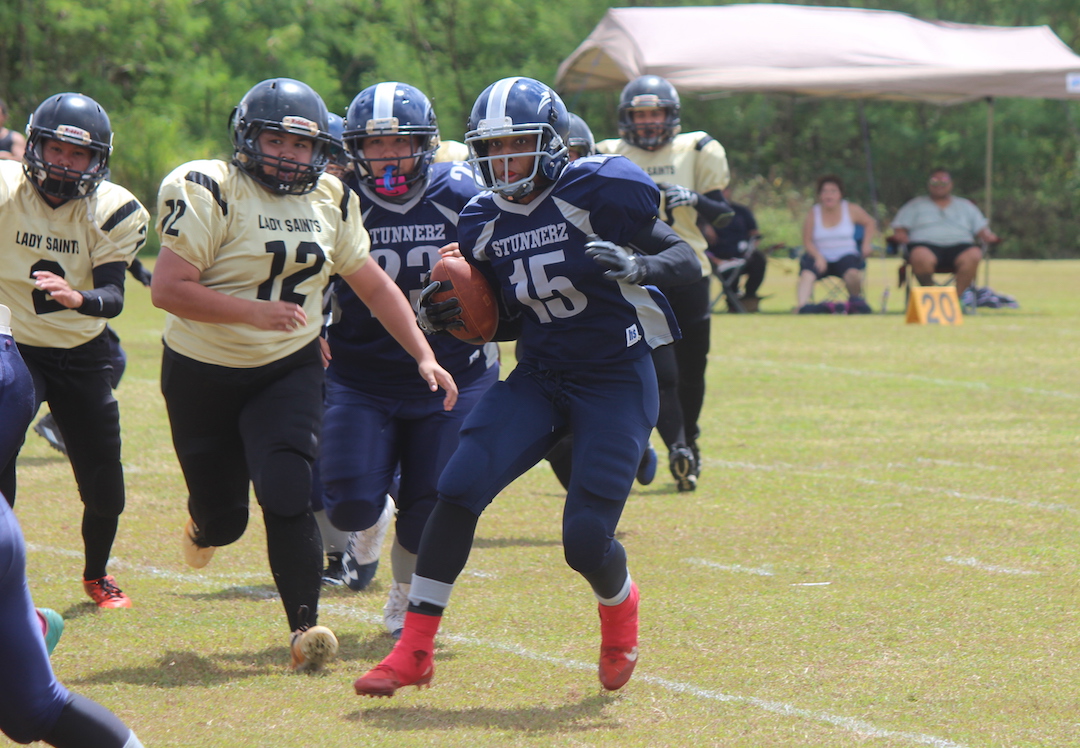 The Island Stunnerz defeated the Lady Saints  Saturday Morning at the UOG field, 24-0, in the team’s last game of the regular season of the GWTFL with playoffs slated for next weekend.

The complete first quarter was a defensive matchup between both football teams. The Stunnerz kicked off, with the Saints own Thaddea Cruz-Blas returning it before being tackled by Amanda Ulloa of the Stunnerz.

Both teams were close to scoring touchdowns, but were plagued by penalties and the opposing defense, preventing any damage to be dealt on either team. Nobody got on the board in the first quarter due to both of the defenses doing their job.

At the very beginning of the second quarter, the Stunnerz had possession of the football after a bad Saints punt to end the first quarter. The Stunnerz only ran one play before being intercepted by Claire Tallada of the Saints. The pass was intended for receiver Deniece Hoya.

The Saints lost one yard on a run play before fumbling the ball on the very next play. This fumble caused a turnover, giving the ball back to the Stunnerz.

Stunnerz went through a bad series, eventually getting to fourth and 11, but going for it by giving the ball to Danielle Vaughn, who gained zero yards, causing a turnover.

The Saints ended up in a bad field position after losing six yards. This offensive malfunction set up a huge defensive play. On a pass attempt, Emiliana Cepeda broke through the line and sacked Saints quarterback Ciara Cali in the endzone, earning a safety. The Stunnerz now had the lead and were on the board first.

Because of the previous safety, the Saints had to kickoff. This launched another scoring opportunity. A few plays later, a ball was thrown to Hoya, this was a touchdown. The Stunnerz completed the two point conversion, giving them a 10-0 lead.

The Saints were now to receive the kickoff after the Stunnerz scored their touchdown, but the return person bobbed around the ball, resulting in a kickoff fumble, giving the Stunnerz the ball yet again.

After a highly offensive series, a one yard run was played for a touchdown, making the score 16-0. This was the conclusion of the first half of the ballgame.

At the beginning of the third quarter, the Stunnerz had the ball again, after returning the kickoff from the Saints. The ladies used the run game to make their way towards the redzone. After a few short yardage plays, Vaughn dashed 48 yards towards the end zone, giving her team another touchdown, increasing their lead to a dominant 24-0 score.

The fourth quarter was very similar to the first quarter. Nobody scored because of the opposing defense and numerous fumbles.

“Next week rest up and get ready for the playoffs,” said Stunnerz head coach Arsenio Babauta ,“today we approached it like any other game, we play every game like a championship game.”

The playoffs for the league will start next week with the quarterfinals.