ISLANDERS SURGE IN STRONG SECOND HALF

The JFK Islanders scored three touchdowns in the second half to surge past the Guam High Panthers after a closely contested first half. 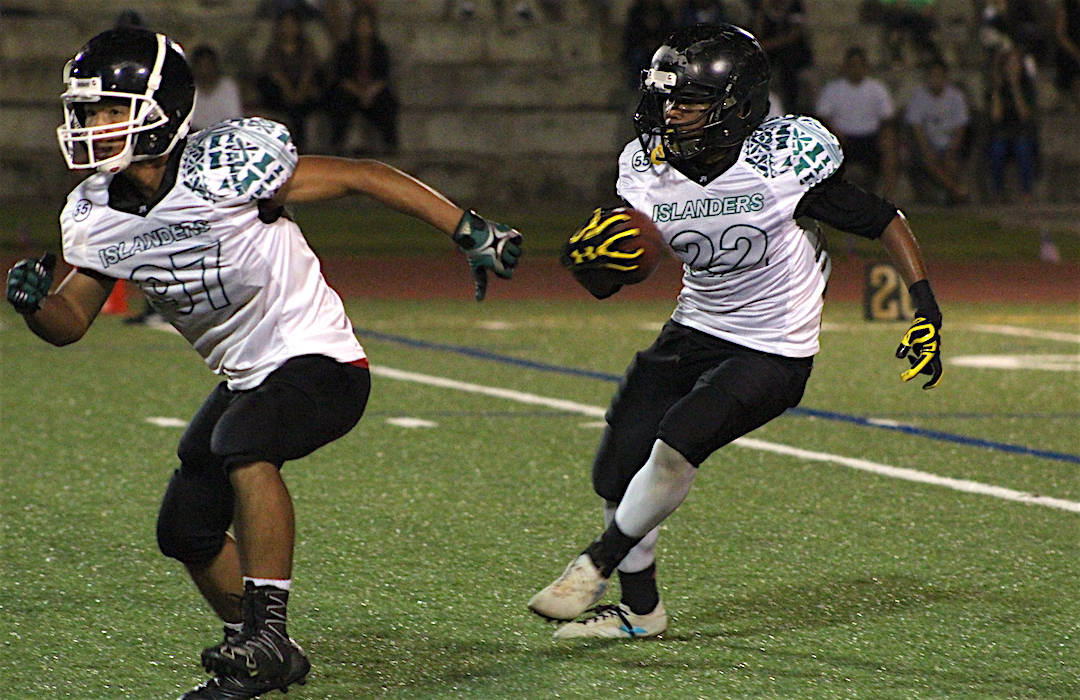 The Guam High Panthers and JFK Islanders faced off in IIAAG high school football on Friday evening on Panther turf. JFK beat the struggling Panthers 29-8, storming out to an impressive second half where they outscored Guam High 21-0.

JFK was shut out during the entire first quarter, as they were unable to get around the fiery Panther defense. After successfully converting on fourth down, the Islanders got a small burst of hope, which was quickly lost after the ball was fumbled and recovered by the defense, resulting in a Panthers touchdown run from quarterback RaSean Jacobs, making the score 8-0 after the successful two point conversion was made.

After this touchdown, GHS was shutout by the Islanders, who would score four touchdowns in the final three quarters of the football game. These touchdowns include two impressive attempts made by JFK sophomore quarterback Allen Blend.

“Guam High scoring first really woke us up. It told us we were in a ballgame and we needed to bounce back,” said Blend, the player of the game. “Our first touchdown is what sparked our fire. We all woke up after that, and that kept us going from there.”

In the first quarter of the game, the Panther defense was on top of the offense the whole time, shutting them out and forcing the Islanders to punt the ball. The Panthers offense got their lone touchdown of the game midway through the first quarter when RaSean Jacobs used a quarterback keep play and ran two yards in the endzone. This made the score 8-0 after they went for a two point conversion and made it.

In the second quarter, the ball was up and down the field, both teams struggling to find a weakness in each other’s defense. This lasted until the Islanders found a way down the field using the passing game, which included a big 40-yard gain from tight end Jonah Hahn to get his squad in the red zone.

When the Islanders were one yard from the goal line, quarterback Allen Blend kept the ball and ran it in himself, putting his Islanders on the board for the first time. After the touchdown, they tied things up at eight points by getting a two point conversion from running back Justin Camacho.

Soon after halftime was over, JFK found their way into the endzone for the second time when Camacho ran 17 yards into the house, making the score 15-8 after the extra point was kicked.

Shortly after this, Blend launched a 35 yard bomb to receiver Jonah Hahn, who found his way to the end zone, making the score a dominant 23-8 with another two point conversion.

The last touchdown of the game was scored when Chase Spotanski did his share by running three yards into the end zone. This made the score 29-8.

The Islanders took this game and ran away with it, giving the Panthers a record of 1-3 in the season.

Islander Justin Camacho runs in a 2-point conversion to tie the game before halftime. (photo by Robert Balajadia)

Islander Chase Spotanski powers through a few Panthers for a short gain. (photo by Robert Balajadia)

Panther Makoa Bamba attempts to bring in a touchdown catch in the 2nd quarter. (photo by Robert Balajadia)

Islander Chase Spotanski bounces to the outside for a run. (photo by Robert Balajadia)

The Panthers run a bit of trickery on a fake play action. (photo by Robert Balajadia)