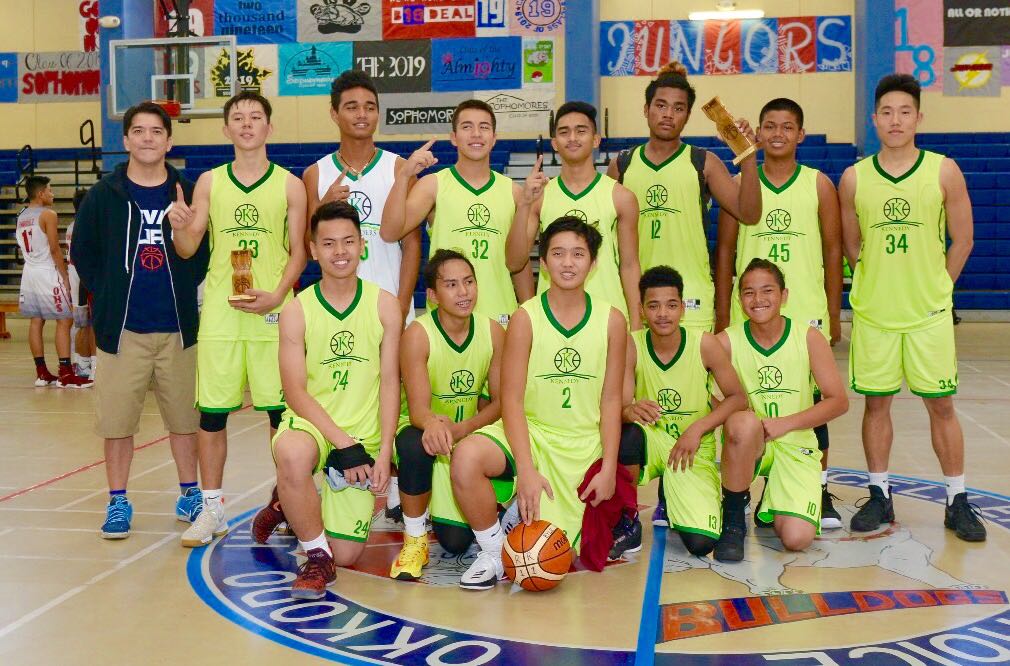 In the end, the John F. Kennedy Islanders staved off an “if” game to win the GBC-IIAAG 3rd Annual JV Boys Basketball Tournament championship and bag back-to-back JV titles Saturday at Okkodo gym.

With the win, the Islanders become the champs, while Okkodo’s two teams took second and third place. The results mirror the regular season with the Islanders and Bulldogs taking 1 and 2, respectively.

The Okkodo Bulldogs 1 were facing an uphill battle, taking on the Green-and-Gold powerhouse. Despite playing a back-to-back, the Bulldogs looked as if they could force the “if” game, taking a six-point lead off drives by Prince Enriquez, who dropped 8 of his 18 points in the fourth quarter.

But, the champs were not to be denied. With their backs against the wall, the Islanders went on a defensive tear, racking up back-to-back steals to tie the game at 50 and go into OT.

In the overtime with Okkodo down to its last five players, the Islanders’ Brandon Chu and finals MVP Chris Marikami attacked the lanes, drawing the fouls and dropping 8 of 10 from the charity stripe to take the 65-59 victory and the ‘ship.

The game started off tight with the two teams trading baskets to knot the game at 19 apiece.

In the second half, the Islanders’ big man Nathaniel Chochol ate up the inside to finish the game with 15 points, while point man Jerry Ngiraremiang added 12 in the win. Chu and Marikami had 16 and 11, respectively.

Okkodo’s Nico Bonita had 15 in the loss, while big man Ray Allen Cajigal added 10 for the second-place finish.

In the third place game, Okkodo 1 defeated Okkodo 2 to eliminate its brother team for a shot at the title.

Bonita dropped 16, while Okkodo point Kevin Cabral poured in 15 in the win. Okkodo 2’s Nick Panganiban and Lino Arizanga tag-teamed for 23 points — 12 and 11, respectively, in the loss.

With 17 players fielded for the season, Okkodo split its JV into two teams for the tournament. The Father Duenas Friars did the same to give their players more quality time on the court.

JFK coach Danny Payumo and GHS’ Ben Leon Guerrero did much of the legwork, scheduling referees, games and venues to ensure the tournament’s success.

“I wanted to put this JV tournament together to give the JV boys an opportunity to play more games,” says Leon Guerrero, who is also the athletic director for Guam High. “Thank you to all those who participated and to Guam High and Okkodo for allowing us to use their gym.”

The 2nd and 3rd place Okkodo Bulldogs and Bulldogs 2 squad.