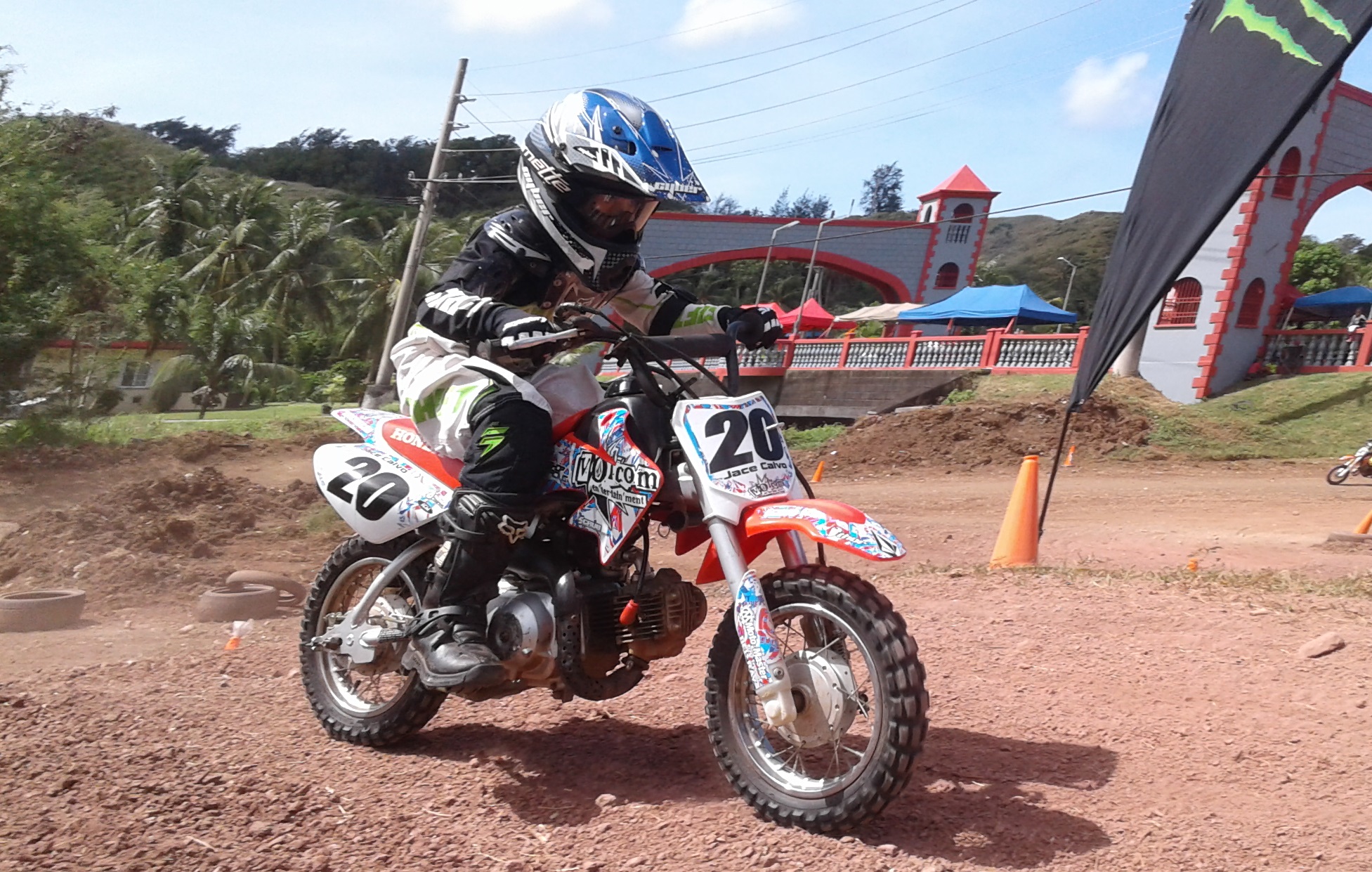 This past Sunday for the second time this year our islands motocross enthusiasts converged on the sleepy southern village of Umatac for the 2017 Guam History and Chamorro Heritage Day Motocross which was being run in conjunction with round 4 of the 2017 Monster Energy Guam Motocross Championships. A large contingent of both two and four wheeled participants were on hand for this special annual event turning a sleepy village into a wide eyed bar banging in the dirt racing celebration.

With gorgeous sunny conditions and a course located alongside a slow flowing clear watered river and right next to the scenic Umatac bridge every fan and racer could not help but enjoy a full day of southern island style racing. The day ended with a trophy presentation for all the top class finishers at the main stage located smack in the middle of a carnival with live music, games, food vendors and in full view of yet another beautiful Umatac bay sunset.

With so many participants turning out for the event two qualifier heats along with a last chance qualifier was implemented for the event. Top qualifiers from heat 1 were #711 Nic Yasuhiro, #31 Tim Weneden, #51 Frank Reeses and #1 JR Cepeda. All four riders moved directly to the A main. In qualifier heat 2 it was #18 Little John Aguon, Umatacs own #389 Shane Morrison, #55 Carlo Pangelinan and #44 Nolan Minor moving directly to the A main. In the Last Chance Qualifier which only moves the top two finishers into the A main it was #57 Kim Aiken and #75 Jeff Rios. Everyone else was regulated to the losers or B main.

In the 20 lap A main #31 Tim Wenden aboard a Rocky Mountain Precast supported KTM took the lead off the start. Wenden was followed by #18 Lil John Aguon aboard his Yamaha, #711 Nic Yasuhiro, and with #389 Shane Morrison and the #1 of JR Cepeda. Wenden was able by mid race to put some distance on what by this time had developed into a heated three way fight for position between Cepeda, Aguon, and Yasuhiro. At the checkers it was a dominating performance by the #31 Tim Wenden taking the A main win. In second was Little John Aguon with Yasuhiro in third. Rounding out the top ten respectively were #1 JR Cepeda, #389 Morrison, #57 Jeff Rios, #51 Frank Reeses, #57 Kim Aiken, and #44 Nolan Minor.

In the 15 lap B main #86 Mike Uribe took the win over #11x Stan Yasuhiro in second and #56 John Aguon sr in third. Rounding out the top five respectively was #47 Geoffrey Perez and #12 Ethan Manibusan.

In Open Atv class action reigning and multi Open Atv champion #4 Robert Bucek took the win aboard the Cycles Plus Suzuki 450 Quadracer with Matt Taimanglo in second aboard his #7 plated Yamaha. Third went to #15 Albert Garlit on his very quick Kawasaki 450. Rounding out the rest of the six rider field respectively were #11 John Gilman, #12 Berlene Taitano and #22 Rosie T. Castro.

In the Over 40 Vet class #51 Frank Reeses grabbed first while #57 Kim Aiken took a second place. Finishing in third was #75 Jeff Rios with #56 John Aguon sr. in fourth and #25 Larry Limtiaco in fifth. Rounding out the rest of the field of vets was #11x Stan Yasuhiro, #83 Ceasar Whitt and #47 Geoffrey Perez.

In the 150cc Minibike class #75 Owen Rios took the win aboard his Cycles Plus supported Honda. Taking second was Honda mounted #30 Sasha Song with #11 Blaze Aiken in third and #45 Tobin Perez placing fourth.

In the 85cc Minibike class #76 Deven Encina took the win over #101 Arthur Manglona and #25 Laurence Limtiaco who took second and third respectively. Rounding out the top five was #74 Damian Manibusan in fourth and #33 Ethan Blyth in fifth.

In the 50cc Kids Minibike class #39 Iziah Green dominated to take the win with #18 John Aguon in second, #10 Jerisha Guzman in third and #20 Jace Calvo in fourth.

Next up on the schedule for motocross racing will be round 5 of the 2017 Monster Energy Guam Motocross Championships. The event will be held at the Guam International Raceway in Yigo on March Sunday 19th. Races start just before lunch and everyone is invited to come watch the event. For more information on the championship please visit https://girmac.teamapp.com/dashboard or cal PIO Robert Bucek at 727-5381.