The Jose Rios Voyagers completed the first round of their GDOE Boys Middle School Basketball season Monday with a 40-17 victory over the Oceanview Knights. The Voyagers improved to 7-0 for the season, defeating every team thus far. There are no playoffs in the GDOE league so the team with the best record at the end of the season is declared the champion. 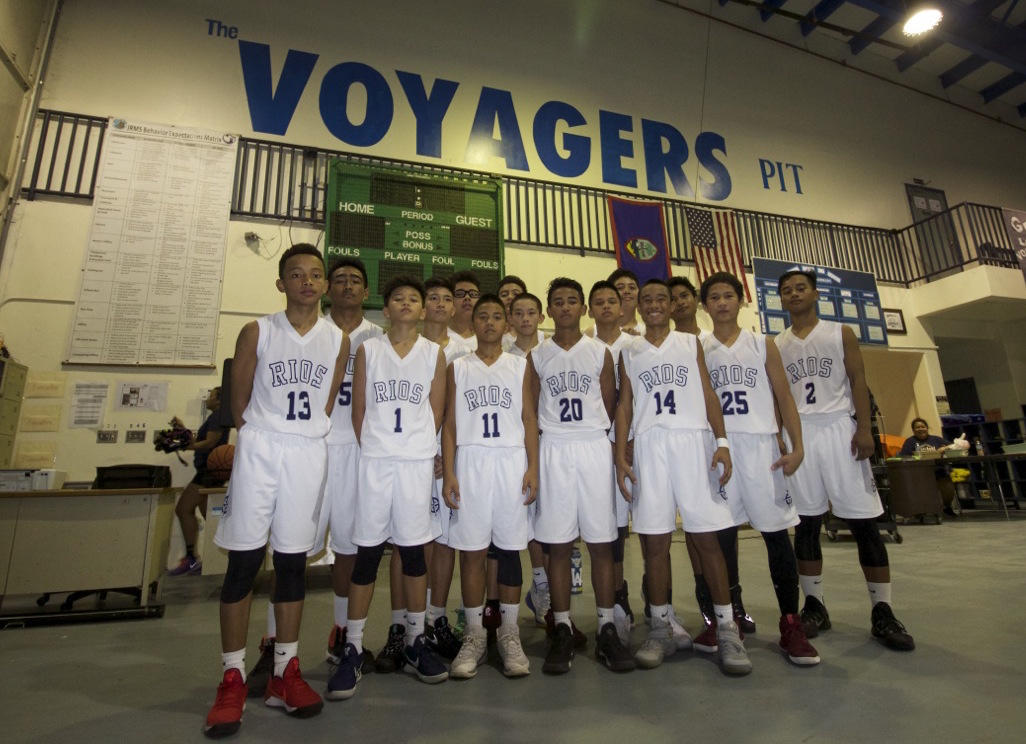 The Jose Rios Voyagers completed the first round of their GDOE Boys Middle School Basketball season Monday with a 40-17 victory over the Oceanview Knights. The Voyagers improved to 7-0 for the season, defeating every team thus far. There are no playoffs in the GDOE league so the team with the best record at the end of the season is declared the champion.

Despite the unblemished record, the Voyagers are not concerning themselves with the hype of being undefeated. They just want to play their game and execute for the rest of the season.

“Coach (Gerry Paulino) tells us before every game to forget what record we have. We enter every game as if we are 0-0,” said forward Marc Tangayan.

“So far we are doing well, we need to just remain humble and take it one game at a time,” said Jaen Paraliza.

Paraliza scored five points in the first quarter as the Voyagers used their trap team defense to take establish a 13-2 lead.

Coach Paulino’s squad took advantage of turnovers in the first half to grab a 23-4 lead by halftime. Isaac Jesus scored the first basket for the Knights who had trouble getting open looks at the ‘Voyagers Pit’.

Dean Weilbacher from the Voyagers hit the opening bucket in the second half to keep momentum rolling in favor of the home team, opening up a 22 point lead in the third period.

“We are just going to continue coming out with the same intensity every game and remain humble,” said Weilbacher. The front court of Weilbacher, Rasher Dois and Nicolas Paet grabbed offensive rebounds for the Voyagers to get second chance points.

Despite trailing in the final quarter, the Knights continued to play hard and closed out the final period out-scoring the Voyagers 11-9. Benjamin Topasna led the offense for the Knights in the final period with four points. Cavahn Tajalle swished a three-point basket, Josiah Quintanilla and Ethaniel Escuadra each scored in the paint to close the game out for Oceanview on a high note. Oceanview falls to 1-6 for the season and will host the Untalan Wildcats on Wednesday.

Dois had a complete game for the Voyagers despite limited minutes with four points, five rebounds, two steals and two assists. Paraliza had a game high seven points.

The Voyagers are the team to beat as the second half of the GDOE season continues on Wednesday. They had a close wins against the Benavente Middle School Road Runners and the FBLG Hawks. Voyager Brian Kuang said the team will need to continue working hard to accomplish their goal. “We have to keep the same mentality of coming into each game with a 0-0 record. We are going to keep up our focus and continue playing with good team chemistry for the rest of the season,” said Kuang.

Big week ahead for the Voyagers

The Voyagers will have big games this week that will likely determine the outcome this season. They will go against the FBLG Hawks on Wednesday at FBLG and then host the Benavente Road Runners on Friday. The Road Runners and Hawks had a battle as well on Monday with the Road Runners winning a close 42-39 victory to improve to 6-1.