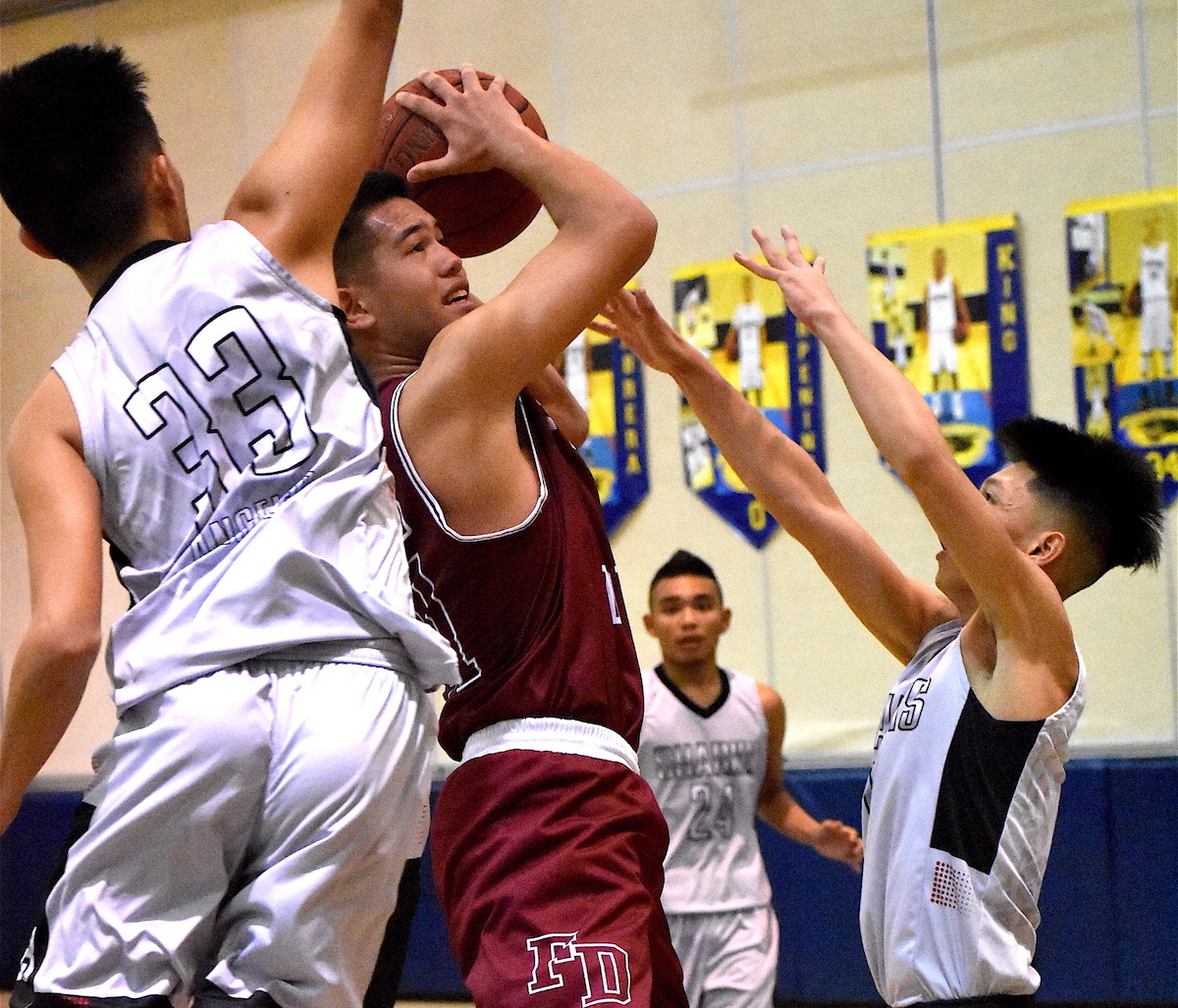 The Simon Sanchez Sharks and Okkodo Bulldogs 2 staved off elimination in Monday’s games at Guam High in the GBC-IIAAG 3rd Annual JV Tournament.

With the wins, the two teams will face each other 5 pm March 1 at Guam High, while the JFK Islanders and Okkodo Bulldogs 1 will square up at 630. The JFK-Okkodo loser will face the winner of Sanchez-Okkodo2 for a shot at bragging rights. Games will be held March 1, Wednesday at Guam High.

In the late game, the Sharks downed FD 2 55-37 to stay alive. Sanchez’s Isaiah Malig lit up the scoreboard for 23 points in the first half to propel his team to a 36-13 halftime score.

Down by as much as 26 in the third, the Friars regrouped behind a stingy 1-3-1 half-court trap. The trapping zone rattled the Shark cages, and the Friars cashed in on a few turnovers.

With the momentum on the Friar side, the FD guards fed their big men to go on a 17-4 run that got them as close as 11.

But, Sanchez’s Thurston Franklin quieted the run with an 8-point performance in the fourth quarter to give the Sharks some breathing room. The Sharks turned to Malig to control the offense and ensure the comeback run would fall short.

Malig led all scorers with 24, while Franklin chipped in 12 for the win. Big man Aidan McDonald had 12 in the loss, with teammate Jayden Taitano added six.

In the early game, the Okkodo Bulldogs 2 overcame a tenacious St Paul team for the 56-42 victory. The Warriors came out hungry in the first quarter, jumping out to a 12-point lead. The Warriors rode on the offensive strength of Ralphy Formosa and Brandon Miranda. The duo tag-teamed, slicing through the Okkodo defense to find the back of the net and take the early lead. With Hayato Tsuji and Isaiah Malcalma patrolling the inside to deny Okkodo’s big men, St. Paul had the edge for all of the first and much of the second quarter.

Okkodo’s Nick Panganiban and Kobe Santos mixed it up late in the second quarter, cranking up the drives to help knot up the score at 23 apiece going into the half.

Tied, the Bulldogs hit an offensive groove in the third period, dropping 22 points to take an 11-point lead going into the fourth.

Down, but not out, the Warriors deployed a half-court trap that netted a couple of Formosa lay ups to eat into the deficit. But, Okkodo’s big men — Kyle Delos Santos and Lino Arizanga — answered back with a run of their own. The duo combined for 17 of the team’s 33 second-half points to ensure the win.

Miranda led St. Paul with 15 points, while Formosa dropped 10 in the loss. Four Okkodo players had double digits. Santos finished with 13, while Panganiban chipped in 12 for the win.