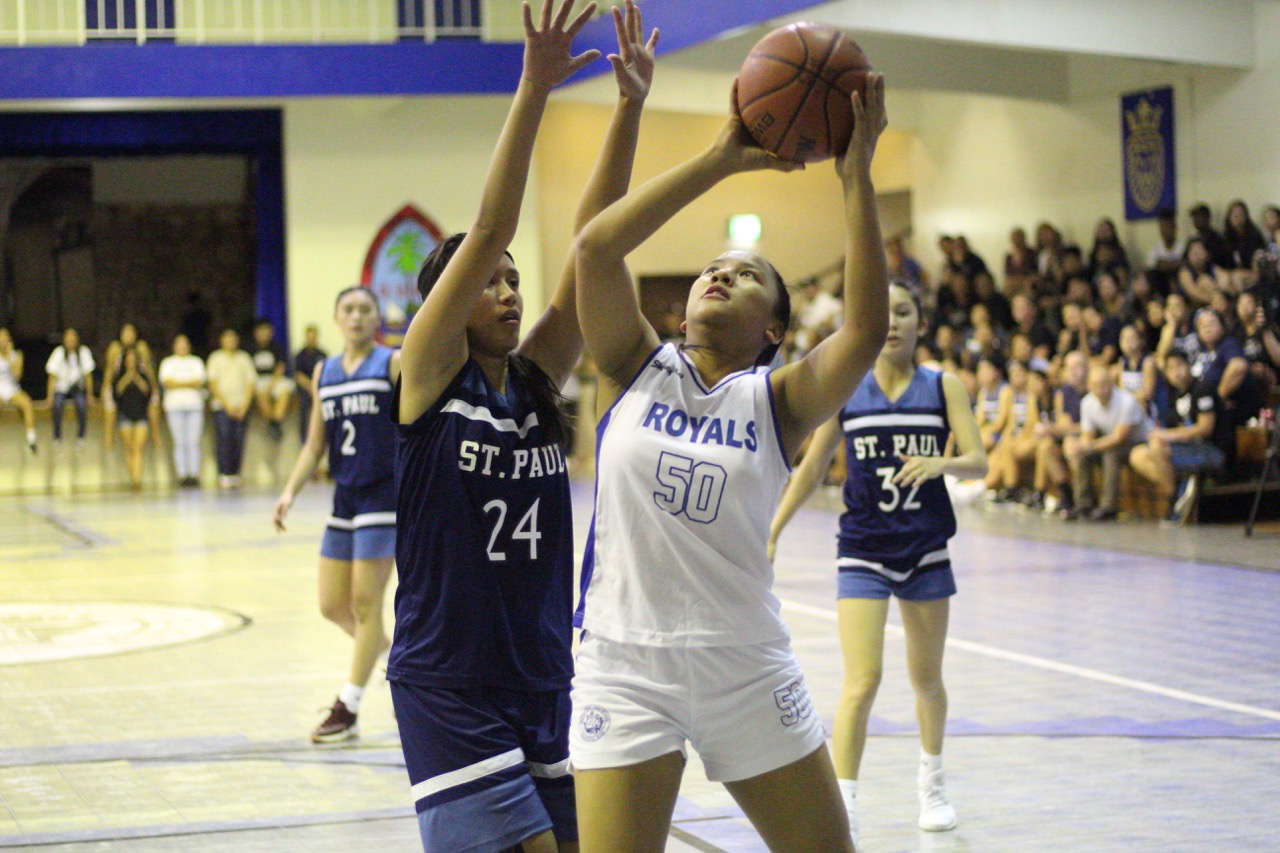 The ND Royals dethroned the St. Paul Warriors from the undefeated ranks in the IIAAG Girls Basketball League with a 61-55 victory on their home court. After starting their season at 1-2, the Royals won their eighth straight game to enter the contender race for the IIAAG title and improve to 9-2 for the season. The Warriors are now tied with the Academy Cougars with the leagues best record at 10-1.

It was a tight race in the first half but the Royals distanced themselves in the third quarter. Nicolette Perez, Elysia Perez, Cedera Aguilar and Lauren Phillips each hit three-pointers to open up the second half to capture a double digit lead and momentum. The Royals maintained control and avoided a late comeback in the fourth quarter to celebrate their eighth win in a row.

The difference in the contest was shooting. The Royals were comfortable on their home court and St. Paul had difficulty adjusting, missing 20 total free throws and shooting a dismal 25 percent from the field (16-64).  On the other side of the token, the Royals shot 35 percent from downtown; sinking 9-of-26 three-point shots. St Paul was held without a 3-pointer for the contest.

“We always practice our shooting at team practice. We didn’t really change our game plan because they changed their defense; we just kept doing what we were doing,” said Elysia Perez.

The Royals played a majority of the game without head coach Josh Torres who was ejected after picking up two technical fouls. There was six early team fouls called against the Royals in the first quarter as Torres expressed his disagreement to the referees.

“I was simply asking for an explanation and I was tossed,” said Torres.

Torres’ ejection may have ignited his squad as they played intense defense for the rest of the game. ND was up 6-1 prior to the ejection. St. Paul’s Niah Siguenza silenced the rowdy southern crowd and made the four technical free throws to trail 6-5.

The Royals responded well and ended the quarter up 12-8 with Bri Leon Guerrero providing much of the offense.

The Warriors kept pushing the pace and managed to score open lay-in baskets off steals with Isla Quinata and Chloe Miranda getting easy baskets. Siguenza gave the Warriors their first lead of the game, converting a basket from an offensive board to go ahead 19-18.

St. Paul enjoyed their first lead of the game for a total of 10 seconds after ND’s Elysia Perez countered on the ensuing possession with a 3-pointer to put the Royals back up 21-19. ND led 23-21 by halftime.

The Royals came out on fire in the second half, making their 3-pointers to take a 38-26 advantage. Warrior coach Paul Pineda went to the box-and-one defense with his best defender on Leon Guerrero, denying her the ball.

ND’s offense continued to flow without Leon Guerrero in the equation and their shooters were ready. The Warriors were unable to come back from that deficit despite out rebounding the Royals 40-33.

Haley Senne had a big fourth quarter and tried to spark a comeback but the Royals made free throws down the stretch to hold on for the 61-55 victory.

Siguenza recorded another double-double with 23 points and 12 rebounds to lead all scorers and rebounders. Senne had 11 points, four rebounds and two steals. Miranda had seven points, five assists and five steals for St Paul.

“Our team defense was really good tonight,” said Leon Guerrero. “This victory gives us a huge boast to our confidence, every team is beatable,” added Leon Guerrero.