Tai Wesley holds his ground against the NBA’s best. 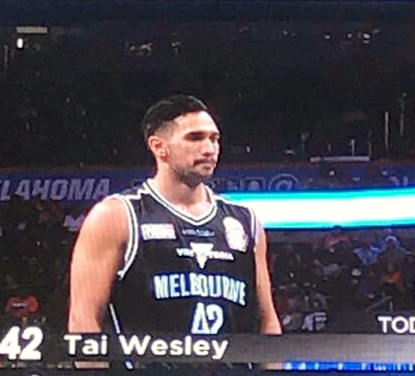 Taking on the new-look Thunder with the addition of superstars Paul George and Carmelo Anthony, Melbourne just came up short 86-85 in an exhibition game.

Wesley, who had some sibling support from brothers Mekeli, Keli’li and Tg, played 30 minutes and scored 13 points to go along with five assists and four rebounds.

“Oh man, it was so cool,” Wesley explained about the experience of playing a top NBA team.

It was an opportunity for Wesley to go up against Paul George once again. They competed with one another in college with Wesley at Utah State and George at Fresno State.

However, not much time was available after the game for the two to hang out.

Wesley brothers Tai, Mekeli and Russ are all part of the Guam Men’s National Basketball Team. Tai and Mekeli were huge parts of Guam’s gold medal team in the 2015 Pacific Games.

Melbourne United flew all the way to OKC for the one exhibition game. They head straight back to Australia tomorrow.