The St. Paul Warriors and the Academy Cougars put on a show Friday Night in a battle of the IIAAG Girls Basketball League’s last two undefeated teams. The contest went to double overtime with the home team Warriors winning the thriller. 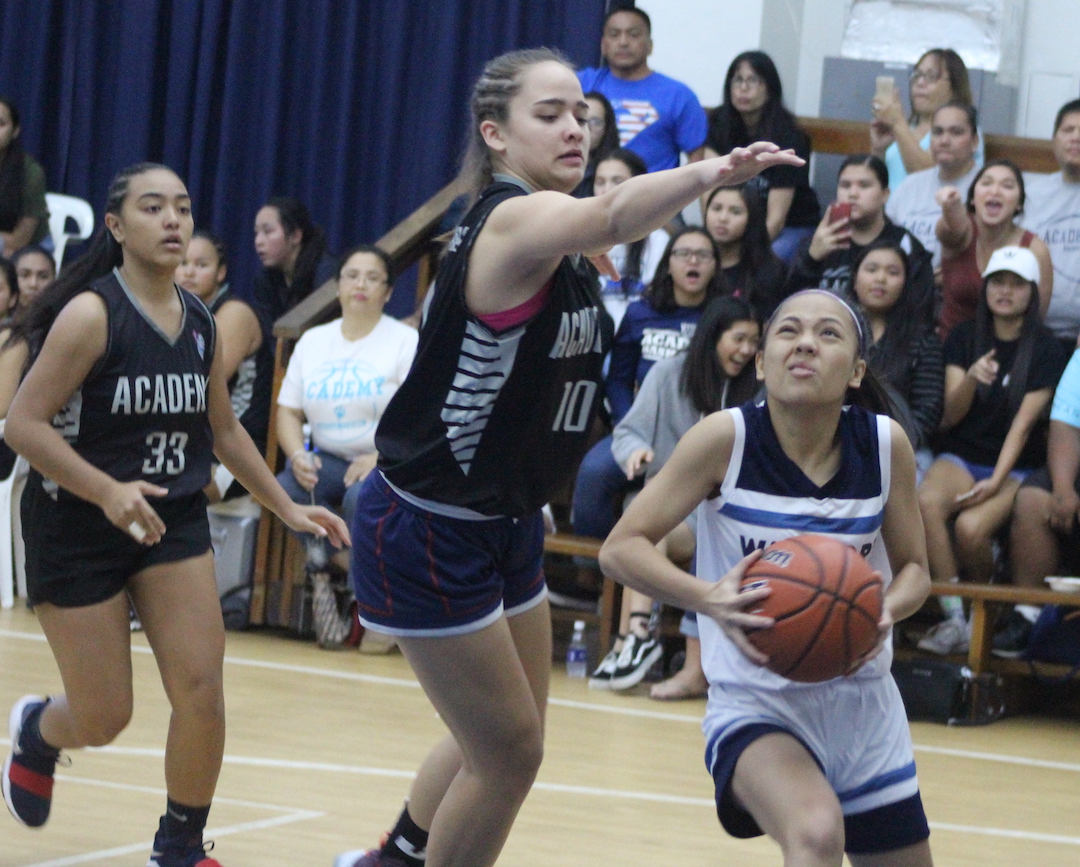 The St. Paul Warriors and the Academy Cougars put on a show Friday Night in a battle of the IIAAG Girls Basketball League’s last two undefeated teams. The contest went to double overtime with the home team Warriors winning a 58-54 thriller.

As advertised, the leagues top two centers put on a show with the Warriors’ Niah Siguenza and Academy’s Mia San Nicolas both stuffing the stat sheet with each player putting up double-doubles. San Nicolas forced overtime with a buzzer beater (see on GSPN’s Instagram) and ended up with 34 points, 29 rebounds and five blocked shots. Siguenza had 19 points and 18 rebounds; but most importantly the victory.

“We learned alot today and this win is good for our confidence as a team. If we meet again in the playoffs, we’d have to do a better job on defense,” said Siguenza.

“She is a special player,” said Academy head coach Eddie Pelkey as he left the court commending Siguenza on her play.

“Mia played a great game tonight, she moves like a guard in the post which makes it hard to defend her,” said Siguenza.

St. Paul head coach Paul Pineda turned to the box-and-one defense in the second half to try and contain San Nicolas.

Academy had a slim advantage to start the game, scoring all their points in the paint or at the free throw line. San Nicolas and Nikki Gandaoli scored all of Academy’s first quarter points as they had the early advantage, leading 9-8.

The Warriors started the second half with an 8-0 run, shifting their defense to a box-and-one with Keiani Pangelinan heavily guarding San Nicolas.

Siguenza capitalized from three Cougar turnovers and scored the first four points of the second half. Haley Senne and Chloe Miranda capped off the run as they Warriors went ahead 27-22.

Academy coach Pelkey called a timeout to get his team back into the game. The Cougars responded and got two steals from Duenas as the Cougars quickly tied the contest at 27-27.

There were several lead changes with both teams battling it out in the final period. With 1:44 left in regulation, Siguenza grabs a rebound and goes coast-to-coast to tie the contest at 45-45. The Warriors’ Pangelinan grabs a rebound and converts an ‘and 1’ basket to go ahead 48-45.

With 25 seconds left, Miranda makes 1-of-2 free throws to go ahead 49-45. San Nicolas gets the hacked under the basket and makes both free throws to trail 49-47. Academy is forced to foul and Miranda misses the first basket of a 1-and-1 opportunity and San Nicolas goes coast-to-coast; making a basket in the paint at the buzzer to force overtime.

Senne sinks a mid-range jumper to go ahead 51-49. San Nicolas gets fouled under the basket and makes both free throws to tie the contest once again at 51-51. Both teams go to their centers and both get fouled with each making 1-2 free throws to stay deadlocked at 52-52 with 4.4 seconds remaining.

Academy has possession and Pelkey calls a timeout to draw up an inbounds play underneath the basket. The Cougars get the ball to San Nicolas but her shot is defended well against the Warrior zone and the game heads into double overtime.

Key players from both teams foul out with Duenas and Salas from Academy and Senne from St. Paul watching from the sidelines. Both teams play good defense with either team unable to score in the first minute of the second overtime.

The Warriors get a huge basket from Janniliese Quintanilla to go up 56-54. Siguenza gets fouled and makes both free throws to put up insurance points, leading 58-54 with 40 seconds left.

The Cougars get open looks but are unable to sink their short jumpers. The Warriors rebound and also miss an open opportunity. The Cougars rush down court with 10 seconds left hoping for another miracle but Siguenza secures the victory, blocking a Cougar shot attempt to end the game.

In the junior varsity game, the home team Warriors pulled away in the third quarter to win 39-12. Jazmin Samonte led the Warriors in scoring with 10 points, Lovely Niloban chipped in eights points. Alexis Fejeran led the Cougars with six points. The Warriors are also the team to beat in the JV league improving to 7-0 for the season.

The Warriors celebrate after defeating the Cougars. (photo by Robert Balajadia)

Mia San Nicolas was the unanimous MVP for the 2017 Girls Basketball Season. (photo by Robert Balajadia)

Warriors Chloe Miranda flies in for a layup in the second quarter. (photo by Robert Balajadia)