D’Angelo Gallardo scored 25 points to help the St Paul Warriors rout the FD Friars 81-63 Friday Night at the Phoenix Center. The Warriors made a huge statement with the victory over the Friars, improving to 2-0 in the Boys IIAAG Basketball season. 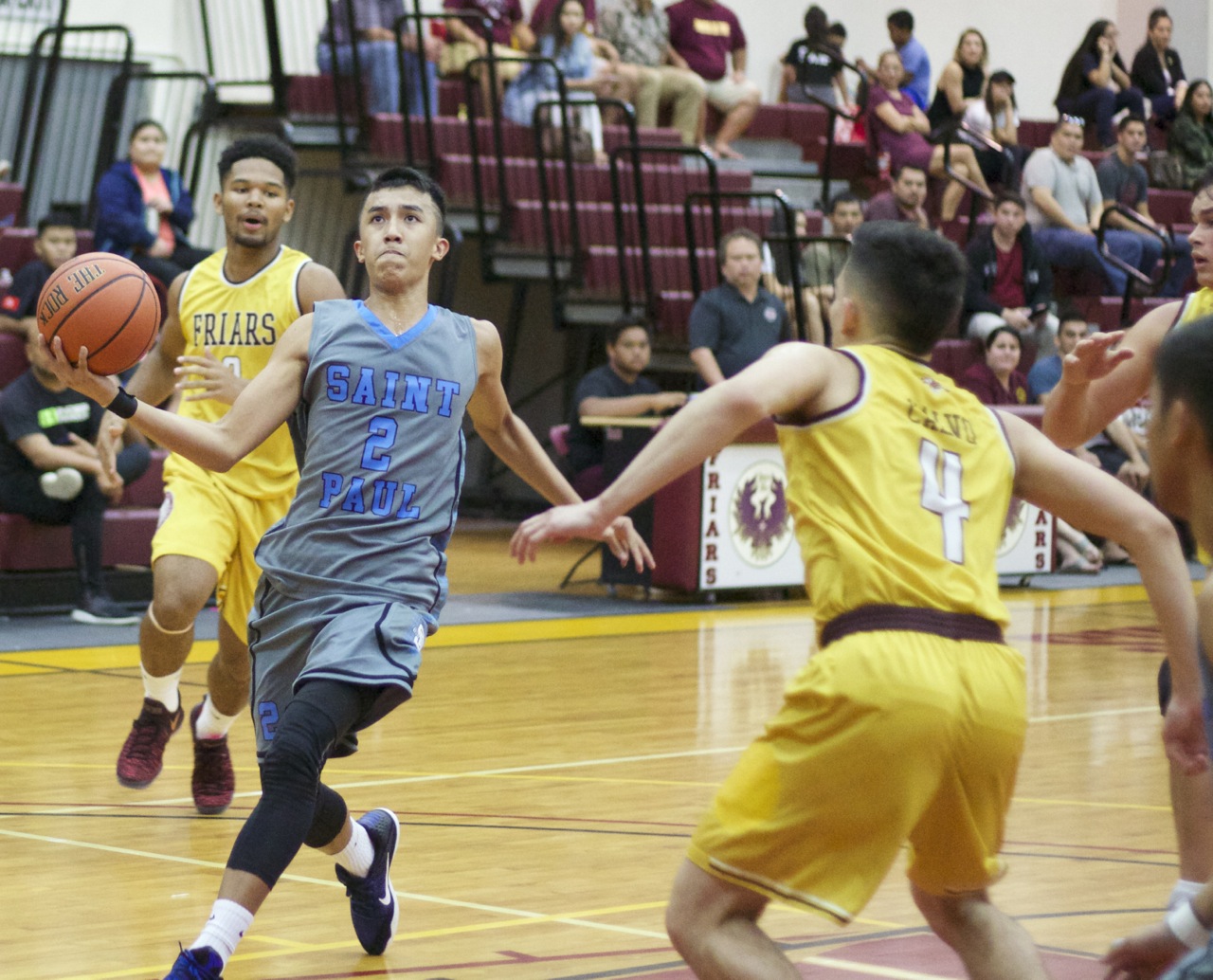 D’Angelo Gallardo scored 25 points to help the St Paul Warriors rout the FD Friars 81-63 Friday Night at the Phoenix Center. The Warriors made a huge statement with the victory over the Friars, improving to 2-0 in the Boys IIAAG Basketball season.

“The goal was to get things done on the defensive side and the offense will take care of itself,” said Gallardo. The swarming Warrior defense forced 22 Friar turnovers, most of which led to easy lay-ins.

Both teams jabbed at each other in the first period, with FD’s Kyle Gaitan and Leon Shimizu leading the Friar offense early. But it was a huge second quarter for the Warriors that was the difference in the game.

Jason Diaz led the charge in the second quarter as the Warriors scored a season high 27 points in the quarter. Diaz scored eight points, all in the paint to shock the Friar crowd at halftime. The Friars trailed 47-28 heading into the locker rooms.

“It’s always tough playing at FD, we just had to stay focused,” said Diaz. Diaz filled the stat sheet with 20 points, seven rebounds and three big blocks. Diaz said the win is not going to make his team over confident heading early in the season. “We are going to treat every game equally and play hard every game”.

The Friars entered the second half showing full court press defense.  They seized momentum in the third quarter with a short run behind the shooting of guards Rudy Gaza, Tomas Calvo and William Camacho. All three guards hit three-point shots in the third period as they cut the lead 13 points.

But the Warriors never caved in, they answered with good execution on offense to push the lead back up to 19 points. Reo Aiken made a clutch three-pointer and Jahmar White scored a transition bucket to silence the Friar crowd as the Warriors led 67-48 after three quarters.

Diaz ended it early at the free throw line, sinking 6-of-7 free throws in the final period to end any hopes of a comeback. Both coaches emptied their benches as the Friar fans headed for the exits.

Gaitan led the Friars with 16 points, Calvo had 12 points and four assists.  Camacho sank two three-pointers for nine points. Despite out-rebounding the Warriors, the Friars shot a dismal 35.5 percent from the field.

White had 11 points and three steals for the Warriors who will face the ND Royals next Tuesday at home. The Friars are now 1-1 and will take on the Okkodo Bulldogs next.

The Warriors defeated the Friars 53-47 in the junior varsity game to complete the sweep. The Warriors are 2-0, the JV Friars are 1-1.

Here are the varsity results from Friday: