The ND Royals may have played the spoiler to the St. Paul Warriors unbeaten season, but it was the Warriors who had the final say in Tuesdays IIAAG Girls Basketball Semifinals. The Warriors rode the hot hands of Hailey Senne and Niah Siguenza as they sent the Royals home to a 68-43 final score. 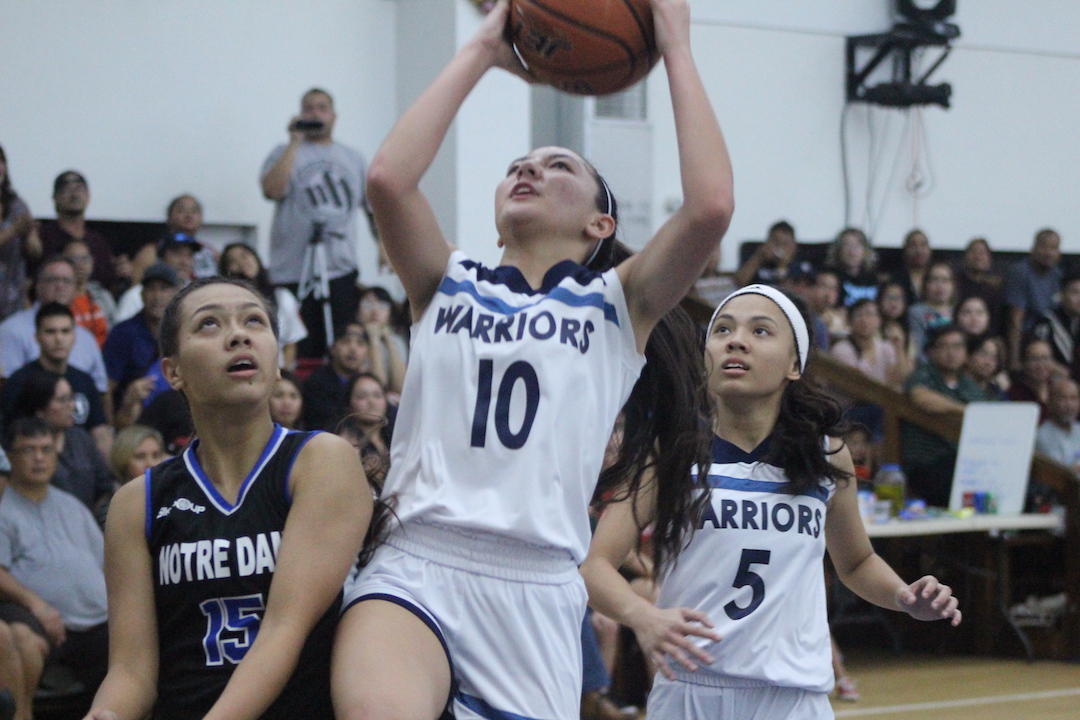 The ND Royals may have played the spoiler to the St. Paul Warriors unbeaten season, but it was the Warriors who had the final say in Tuesdays IIAAG Girls Basketball Semifinals. The Warriors rode the hot hands of Hailey Senne and Niah Siguenza as they sent the Royals home to a 68-43 final score.

Senne had a game-high 23 points, including an 11-point 2nd quarter where she outscored the Royals all by her lonesome as ND only amassed six 2nd quarter points.

“Coach always tells us to play with disparity and I’ve been keeping that in my mind. That allowed us to stay motivated, push the ball on offense and play hard defense,” said Senne on running away with the game.

Siguenza did most of her damage in the second half as she finished with 21 points to pace the Warriors scoring front. Nicolette Perez of the Royals carried the scoring load with 21, including four three pointers.

The Academy Cougars picked up a 52-34 win over the Okkodo Bulldogs to earn the other finals spot, setting up the second meeting between the two schools. Double overtime was needed to decide a winner during the Warriors and Cougars regular season meeting which makes Saturdays title game even more highly anticipated.

“It’s very exciting,” admitted Senne on playing in the finals. “I’m very happy that I’m finally getting a chance to go to a Championship game. It’s my last year; my last chance. I think my team is ready to push hard to get that Championship.”

The Warriors put the pedal to the floor in the 2nd period as they quickly turned a 17-10 1st quarter lead into a 30-10 advantage. The 13-0 run to blow the game open was led by Senne as she scored seven-straight points in the first three minutes of action.

A bucket from Brie Leon Guerrero ended that run, but St. Paul piled on more points to close the quarter on an 11-4 to sit comfortably 41-16 at the half.

“We were really unfocused when we met in the regular season. We got mentally tougher and understood that this team is responsible for our only loss and we wanted to get that back,” said Senne on the difference between games.

The Royals showed some signs of life in the 3rd period as Perez nailed a pair of long-range bombs to spur a 6-0 run for the Royals to get within 50-24, but Siguenza proved too much as she banked in back-to-back buckets off of offensive boards to push St. Paul to a 57-27 lead.

ND would outscore the Warriors 11-9 in the final quarter, but the big first half lead proved insurmountable as the Warriors avenged their only loss of the season while punching their finals ticket in the process.

Royals guard Elysia Perez was met with stiff defense all game as the Warriors had a defender shadow her everywhere on the floor. (photo by Robert Balajadia)

Warrior Isla Quinata sends up a floater after a ball fake. (photo by Robert Balajadia)