The St Paul Warriors got revenge over the St John’s Knights and separated from the rest of the field with a 51-49 victory on their home court. The Knights defeated the Warriors in the GSPN pre-season championship game last month, handing them their only loss this year. But that was the pre-season. 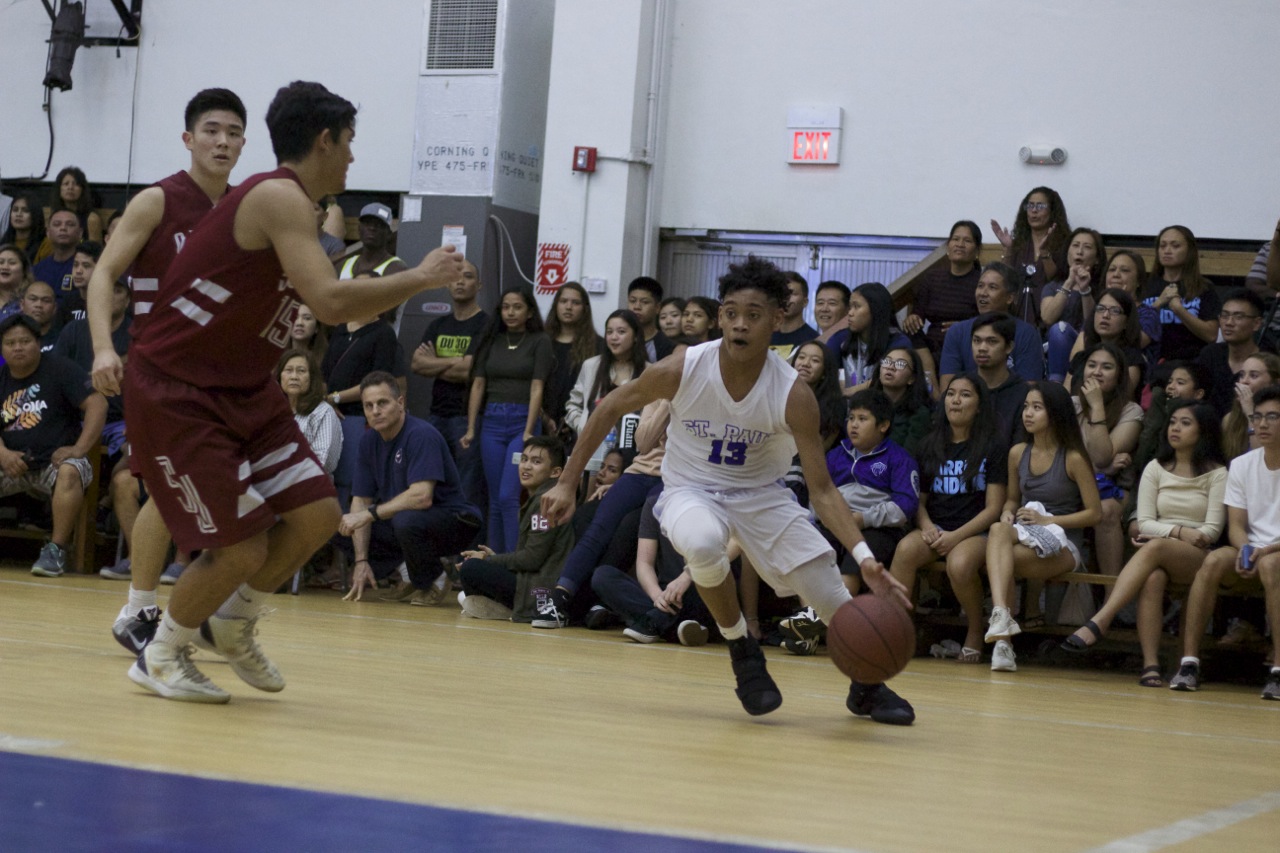 The St Paul Warriors got revenge over the St John’s Knights and separated from the rest of the field with a 51-49 victory on their home court. The Knights defeated the Warriors in the GSPN pre-season championship game last month, handing them their only loss this year. But that was the pre-season.

The Warriors are now 8-0 in the IIAAG boys basketball league and are looking very good to capture the top seed going into the playoffs with key victories over the league’s top teams.

“It shows how much heart this team has. The Warriors have been through so much in the last several years, we are still the underdogs,” said point guard D’Angelo Gallardo. Gallardo had 13 points for the game and had the defensive assignment of guarding St. Johns’ star point guard Michael Min. “St John’s has a lot of good players and we give them respect for that but we just want to come out and show we can play,” said Gallardo.

The Warriors surged ahead 8-2 to open up the contest. Jason Diaz led the offense early for the Warriors scoring four quick points, much to the approval of a packed home crowd. With the focus on the Knights’ Min and sharp shooter Takumi Simon, the Knights found offense from Tony Hsieh who swished two open three-point shots to tie the contest.

The teams went back and forth in the first half with good defense on both sides in a low scoring contest. The Warriors finally seperated themselves in the third quarter with Gallardo and Jahmar White leading the offensive attack to go up by as much as 10 points.

The Warriors looked to secure the win early in the fourth quarter but freshman William Sha stepped up big time for the Knights, hitting a clutch three-pointer and sinking a put back to cut the deficit to 44-41 with less than five minutes remaining in regulation.

Maui Santos made a crucial offensive put back to go ahead 49-43 with 1:15 remaining. After a missed three pointer by Shieh, the Warriors’ Jericho Perez quickly rushed to the basket and made a lay-in with 55 seconds remaining to take a comfortable 51-43 lead.

Wendy’s Players of the Game Jahmar White and D’Angelo Gallardo.

But with the dangerous Knights, the game was far from over. Simon finally found an opening and swished a three-pointer to shift momentum to trail 51-46. The Knights were forced to foul but the Warriors were unable to sink the first attempt of a 1-and-1 penalty and the Knights’ Ricky Brown grabbed the board, finding Min on the outlet pass. Min dribbled up court and launched a long three-pointer than found the bottom of the net with seven ticks remaining and the Knights suddenly trailed 51-49.

The Knights were forced to foul and again the Warriors were unable to put the game away at the free throw line as Brown grabbed another rebound and called a timeout with three seconds remaining.

Unfortunately for the Knights, they were unable to put up a shot to tie or win the game. Perez stole the inbound pass from Brown and threw the ball up in the air to preserve the perfect season. Perez was the unsung hero off the bench, but he said it was team defense that won the game. “We always focus on defense for every game. The offense will come if we play good defense,” said Perez.

Perez had 12 points and seven rebounds off the bench for the Warriors who defeated the top tier of teams in the league with victories over the Guam High Panthers, Sanchez Sharks, Fd Friars and the Knights.  They face the GW Geckos and Southern Dolphins next week.

“Everyone on this team has a job and my job is to come off the bench and provide support to my teammates. Coach (Neo Pineda) puts his trust in me and I put my trust in my teammates,” said Gallardo.

White led all scorers with 16 points and four rebounds, Diaz had four points and 10 rebounds for St Paul. Min led the Knights with 13 points and three steals, Sha had 12 points. Simon and Hsieh scored 10 and 8 points, repectively. Brown grabbed a game high 12 rebounds.