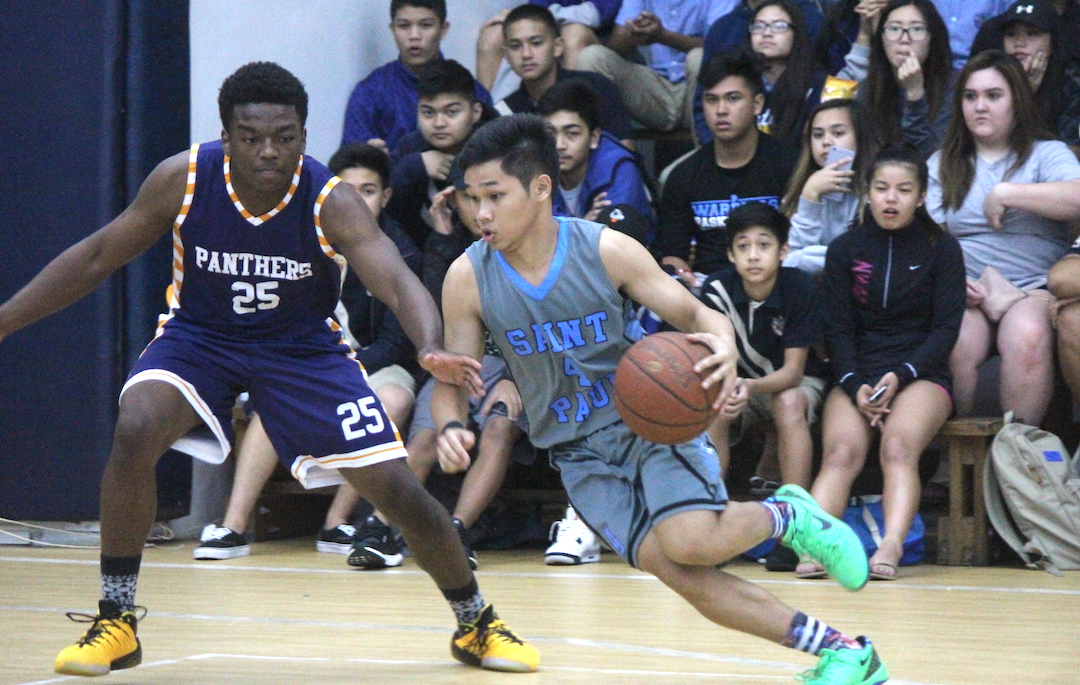 Home field advantage played a big factor for the Warriors as they managed to hold off a rally from the Panthers in the 4th quarter. The physical and emotional game garnered technical fouls, a fan and player ejection, and a wealth of big defensive plays.

“It’s a huge advantage to play in front of our home crowd. We love our fans and they are awesome,” said Warriors Jason Diaz on the win. “Guam High played great defense late, but we managed to get it done by moving the ball down the court quicker and we played stronger defense. Defense really fueled everything we did.”

The league MVP Jason Diaz made his presence felt on both ends of the court as he and teammate D’Angelo Gallardo scored 19 points while holding off a big night from Panther Robert Kranz, who had a game-high 24 points.

Drama took over the 4th period after the Panthers battled back from a double-digit deficit to get within 51-47 after two buckets from Kranz. Panther Juan King then got a big defensive swat on Diaz during a fast break that ignited the Panther crowd with five minutes remaining.

Up 53-48, the Warriors got a big bucket from Gallardo on the wing, netting a three to rattle the Panthers 56-48 with just under four minutes to go in the game. Then, the technical fouls flew.

Guam High had issues inbounding the ball after Gallardo’s bucket, turning it over in front of the Warriors fans. With the action being so close to the court in the St. Paul gym, some fans proved overzealous in celebrating, getting off the bench while nearing King who was looking for the loose ball.

King lost his cool and started to bark back at the crowd with a few Warriors stepping in. The referees sent each players to their bench after issuing King a tech, where King let out more frustration on the sidelines. A smacking of the chair led to King’s ejection while a fan also earned an ejection for his overzealous celebrations.

King left the court in a courteous manner, giving handshakes to the officials before making his exit for what could be the last time in his IIAAG career.

“We understand Guam High is a physical team and we knew they were going to give us their best shot and we were prepared for it,” said Gallardo, who also picked up a technical foul in the first half. “The coaching staff did a really good job at calming us all down and that we needed to throw out the jawing we were doing,” said Gallardo.

After the emotional moments in the quarter, the Warriors full-court pressure denied the Panthers to get within two scores with Diaz putting the final touches with a fast break score off a steal to finalize their spot in the 2017 championship.

“It’s really just going to be another game. These guys have turned into my brothers right away and we all the know the feeling of winning. We just want to end the season off right,” added Gallardo on competing for his first IIAAG title.

With the Friars securing their spot in the finals, Diaz is aware all eyes will be on him since winning the league MVP.

“Supreme focus, that’s really it. I just have to stay humble,” ended Diaz.

The title will be played at the UOG Field House after the consolation game between the Guam High Panthers and Sanchez Sharks.