FRIARS LOCK DOWN SHARKS FOR SPOT IN FINALS

The FD Friars stamped their ticket to the IIAAG Boys Basketball championship game with a 50-38 victory over the Sanchez Sharks Tuesday night at the Phoenix Center. The Sharks held a lead in the third quarter but an 8-0 run sparked by FD senior Leon Shimizu helped the Friars gain confidence and maintain their lead in the final quarter. 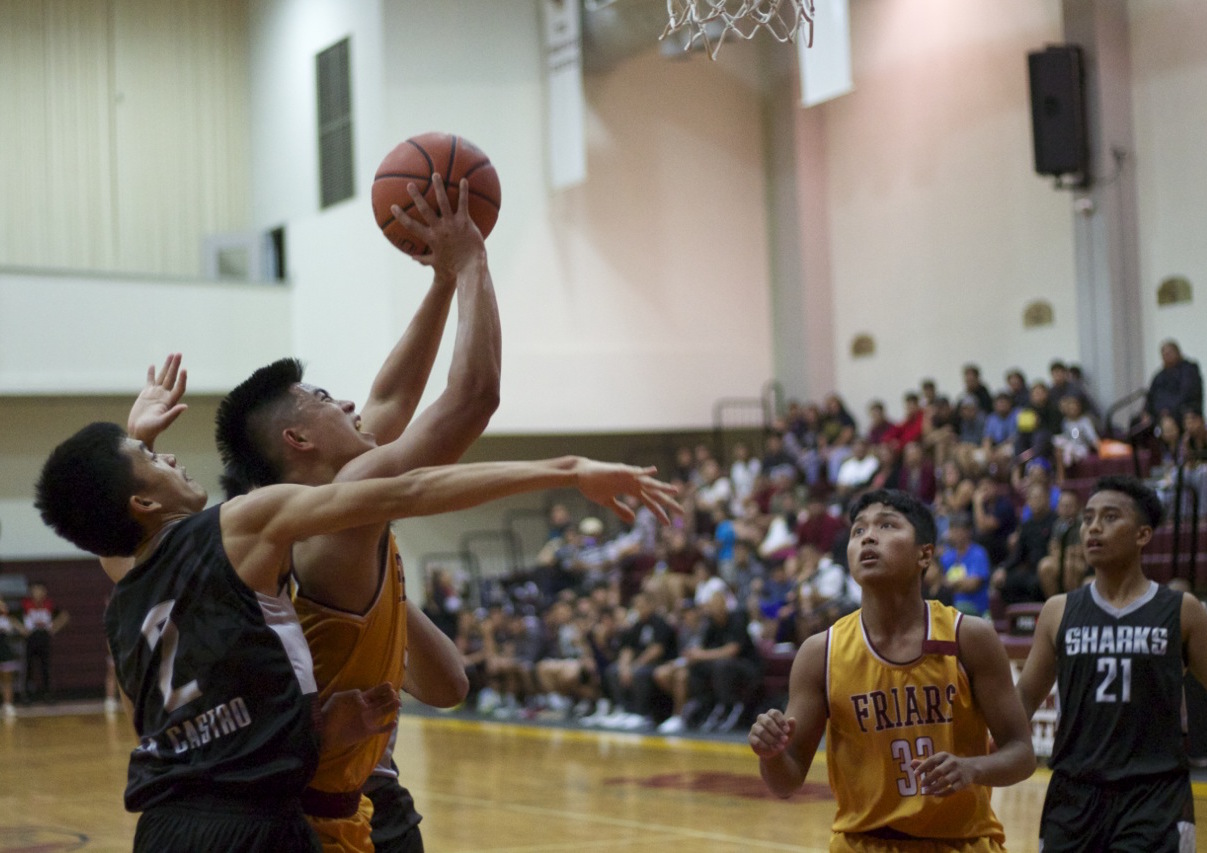 The FD Friars stamped their ticket to the IIAAG Boys Basketball championship game with a 50-38 victory over the Sanchez Sharks Tuesday night at the Phoenix Center. The Sharks held a lead in the third quarter but an 8-0 run sparked by FD senior Leon Shimizu helped the Friars gain confidence and maintain their lead in the final quarter.

The Friars played inspired ball, dedicating the game to fellow student Bryan Ho who passed away last week due to a health issue. The Friars held a moment of silence before the game and wore maroon stripes on their jerseys in honor of the FD senior.

“One of the parents, Uncle Rodney (Jacob), came up with the idea to do something to honor him. He was our brother, we felt that we needed to do something to honor him and we dedicated this game and the rest of our games to him,” said Shimizu. Shimizu played inspired, grabbing two offensive rebounds and stealing an inbounds pass as the Friars went on a 8-0 run in the third quarter. Despite having four fouls, Shimizu crashed the boards and the second chance opportunities he created led to points.

It was a battle of the league’s two best defenses, but rebounding was the big difference with FD winning the battle of the boards 42-30. FD had multiple second chance points with the front court of John Thomas Fegurgur, Shimizu, De’Aundre Cruz and Kyle Gaitan each getting offensive rebounds for chance points. The Sharks also shot a dismal 6-22 from the free throw line (28 percent).

The Sharks trailed early but a three-pointer by Aaron Castro tied the game at 8-8 after the first quarter. JB Obra and Harold Gaerlan both hit short jumpers for the Sharks to lead 15-11 to start the second period. The Friars answered before halftime with Gaitan making a shot before the buzzer to lead 21-18 at halftime.

Sanchez came out of the break on fire, going ahead 24-23 behind the offense of Obra and Anthony Castro. But that was the last lead the Sharks. Tomas Calvo drove to the basket and got fouled in the process for a three point play to start the run. Shimizu stole the inbound pass and found Cruz under the basket for an easy score. The Sharks turned the ball over and fouled Gaitan who hit the first free throw but missed the second which was rebounded on the weak side by Shimizu that led to another basket (scored by Gaitan) to cap off the run, forcing Sanchez head coach Jin Han to call a timeout.

The Sharks made a run in the fourth quarter with RJ Saburo and Obra netting three-pointers but a steal by Gaitan and the free throw shooting by Calvo ended their run and their season. The Friars will meet the St. Paul Warriors in a showdown of the leagues top two teams.

“We started sloppy, but we got the win today with good defense,” said Gaitan who had a game high five steals. “Sanchez did a good job today, they are a very patient team and they play good defense. They have a very good coach in coach Han, every team he leads always brings it,” said Gaitan.

Aaron Castro led the Sharks with 11 points and eight rebounds. Obra had nine points going 2-3 from three-point land for the Sharks. The Sharks are scheduled to face the Guam High Panthers on Friday at 530pm in the consolation game.

Gaitan had 17 points to lead all scorers, Cruz had five points and 11 rebounds for the Friars. Shimizu had four points and 10 rebounds, Calvo had 14 points and three assists.

“The team that played against St Paul in the second game of the season is different now. We are going to head into the championship game and give it our all,” said Calvo.