The Okkodo Bulldogs are aware that just making the IIAAG Boys Basketball playoffs is going to be a challenge given the competition in the Taga Division. Tuesday night presented an opportunity to move up in the standings, which helped fuel a 69-64 win over the visiting GW Geckos. 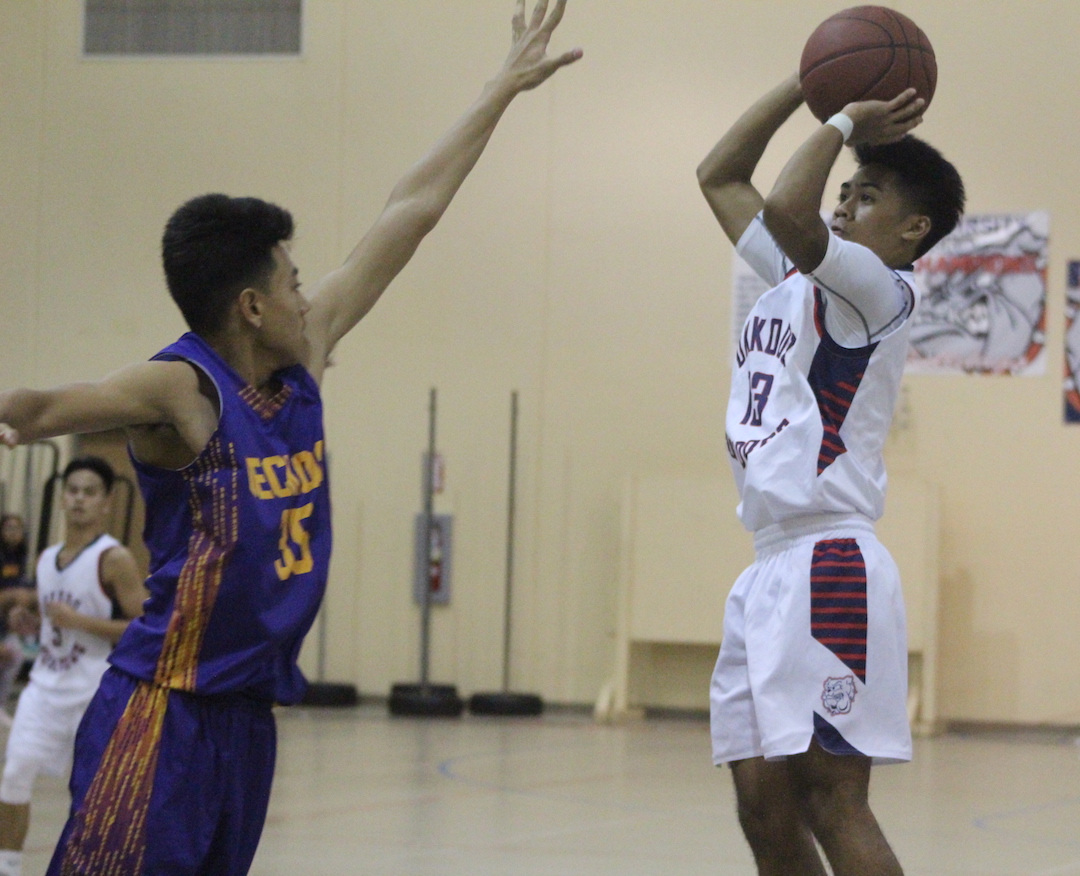 The Okkodo Bulldogs are aware that just making the IIAAG Boys Basketball playoffs is going to be a challenge given the competition in the Taga Division. Tuesday night presented an opportunity to move up in the standings, which helped fuel a 69-64 win over the visiting GW Geckos.

“The team realizes that we’re behind the gun. Our division is tough. We’re 5th place and the odd-man out. We control our destiny. We can’t rely on other teams to lose, we need to get it done. For us to have a chance, the things we do in practice has to come out in the game,” said Mad.

“We don’t have a pure scorer or a player that you want to hone in on and stop. They have to buy in to the team concept, which they’re doing, but it’s a struggle. We’re hoping we can make a run in the second half of the season,” added Mad.

Okkodo were stuck on a roller-coaster ride in each quarter where they would build a double-digit lead only to watch it dissipate in the final minutes. Down 33-22, the Geckos quickly shaved off six straight points in the final 1:30 of the 2nd period to get within 33-28. A three-pointer by Dale Bautista proved big to keep the Bulldogs up 36-28.

Three-point shooting and easy buckets from Manalo in the 3rd allowed Okkodo to go up by their largest lead at 15 points, but Ramos closed the final seconds of the quarter with a quick 5-0 run to get within 53-43.

The Geckos were mounting a big comeback after Eian Naputi converted an and-one to get within 59-52 with five minutes still left to play. A strange technical foul was called on the Geckos a minute later with six players on the court, halting momentum.

Prince Enriquez converted both technical free throws to go up 63-54 with Okkodo gaining possession of the ball.

With the game seemingly in hand up 67-54 in the final 1:40, the Geckos posted another quick comeback. Ramos converted a layup plus a pair of free throws to spark a 6-0 run to get within 67-60.

An Okkodo timeout with 1:20 left allowed coach Mad to draw up a play. The Bulldogs successfully shaved off 35 seconds with a weave-patter play before getting a layup from Manalo to go up 69-60. GW would generate four points in 20 seconds before the games final.

Okkodo had trouble closing out quarters on the defensive end with coach Mad believing their talent alone carried them.

“It came down to a lack of hustle. They were in position, but the second effort wasn’t there. There was no communication on defense, I was doing all the talking. The things we do right in our better games we didn’t do well tonight. GW played well tonight. It would have been a different game if we didn’t have the shooters we do,” said Mad.

The Bulldogs host the Guam High Panthers on Friday while GW continues their Northern trip as they take on the Sanchez Sharks.

Bulldog Ruedel Galang gets to the bucket in the second half. (photo by Robert Balajadia)

Eian Naputi gets the bucket to go on a drive to the rim. (photo by Robert Balajadia)

Bulldog Antonio Crame gets an open look on the wing. (photo by Robert Balajadia)

Gecko Fabric Ramos fights through the contact on drive to the rim. (photo by Robert Balajadia)

Gecko Dylan Trusso uses a quick cross to break down the defense. (photo by Robert Balajadia)