COUGARS FIGHT THROUGH GRITTY GECKOS TO GET INTO FINALS

In a highly competitive semifinals matchup between the Academy Cougars and the GW Geckos, reigning MVP Mia San Nicolas demonstrated why she won the award twice in a row, dominating on both sides of the ball in the game’s final quarter as the Cougars win 56-49. 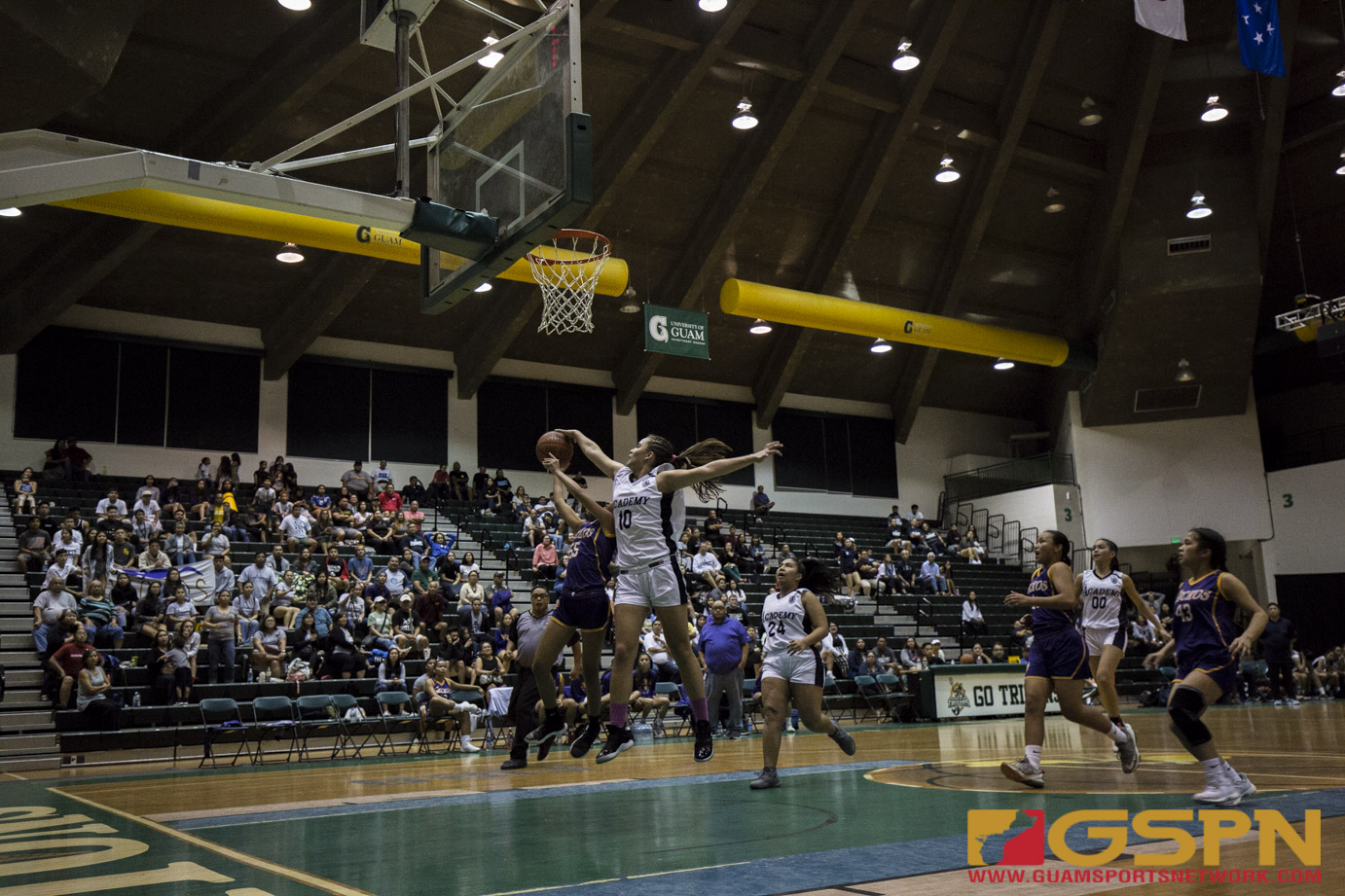 In a highly competitive semifinals matchup between the Academy Cougars and the GW Geckos, reigning MVP Mia San Nicolas demonstrated why she won the award twice in a row, dominating on both sides of the ball in the game’s final quarter.

The Cougars overcame a tough performance by the Geckos, winning 56-49 to advance to the Championship Game this Friday.

In the third quarter, the Cougars held an 11-point lead behind great play in the interior. But the Geckos kept their composure and would not make it easy for the Cougars with a trip to the championship on the line.

Gecko Bila Aguon started off the third quarter with a key steal, scoring in transition off of a left-hand floater. That play cut the deficit to nine at 34-27. A few plays later, Aguon found herself with another opportunity to convert in transition and followed through. Then, good defense paved the way for Geckos Aubri Chargualaf to score on a baseline drive. The Geckos shrunk an 11-point deficit to 3 by the end of the third quarter.

In the fourth quarter, the intensity began to pick up and the competitive spirit was alive and well.

Geckos Guard Alana Salas opened the fourth quarter with a three-pointer from the left corner, which tied the game at 41-41. But a possession later, Academy’s Therese Fegurgur recaptured the lead off of a shot in the paint.

Then, Salas stole the ball from Cougars ballhandlers and pushed the pace in transition, but San Nicolas was right behind her and blocked Salas’ layup opportunity. The block put momentum back on Academy’s side.

San Nicolas then scored in transition and gave her team a six-point lead with only four minutes left to play in the game. San Nicolas caught fire on the defensive end following the block and racked up two more before the game ended.

San Nicolas gave insight as to how she is able to take over ballgames with such high stakes on the line:

“I just try and keep a composed mindset and play the game the way I know how,” said the soft spoken Mia.

The tension began to pickup with two minutes left to play. Fans from both sides were anxious with the clock winding down, making their voices heard during every call that the refs made.

The Geckos continued to fight as forward Haley Banez converted on a layup in transition. Bila Aguon scored a possession later after cleaning up an offensive board and cut the deficit to four.

When Academy Freshman Myka Terlaje’s number was called, she stepped up to the plate, scoring eight straight points to give her team a 56-48 lead.

“It wasn’t planned. I put her in and she took advantage of the opportunity. There was one shot she put up and it looked impossible, I don’t know how that shot fell,” said Head Coach Jimmy Yi, with a smile on his face, as he talked about the boost that Terlaje gave her team in the closing minutes of the game.

The first half consisted of several lead changes. Both teams traded buckets and showcased great offensive ability. Academy looked to score on the inside and found the reliable San Nicolas to make tough shots.

Cougars freshman guard Cori-Nicole Paulino looked very promising, showcasing great finishing ability on the interior and using her speed to get past defenders. In the first half, the Geckos had great success in knocking down the 3-ball and were led by the talented guard duo of Aguon and Salas.

The Championship rematch between the Cougars and Warriors will be a treat for fans. In their regular season matchup, MVP San Nicolas found herself in foul trouble early, and the Warriors were able to capitalize and pull away by a big margin.

San Nicolas is hopeful that this time around will be different, and elaborated on what is needed to beat the dominant play of the Warriors.

“We need to be able to play smart defense, take good shots, and move the ball.”

The Championship game is set to go down at the UOG Calvo Field House at 7 pm following the consolation game.