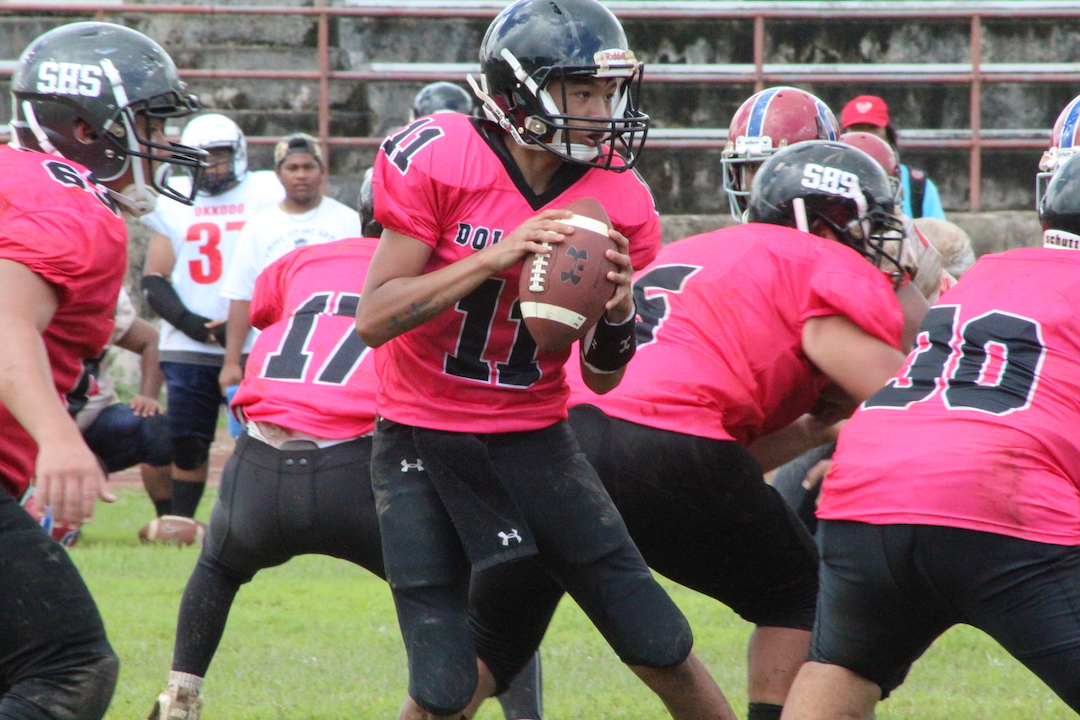 A two-game win streak, a second straight shutout and a winning record at (2-1). No matter where the Southern Dolphins end up at season’s end, winning more football games through three weeks than they have over the last handful of seasons combined has them riding high in 2018.

Dolphins sophomore quarterback Ethaniel Escuadra threw two touchdown passes with both of his touchdown receivers also making a big impact on defense. John Topasna and Gabriel Stanley both hauled in a touchdown catch each while also each getting an interception.

“I trusted my receivers and their speed today and I knew that they could get to those passes I threw,” said Escuadra on his connection with his wideouts Saturday. “We’re a family and we’ve connected well with each other since Day 1.”

“We’ve been practicing hard all week and we’re just prepared for the game today. We left it all on the field,” said John Topasna.

Southern’s third touchdown was scored on the ground by Noah Rosalin.

The Dolphins don’t normally have many home games on the schedule which prompted the school to celebrate ‘senior day’ at the field.

“It’s great to win at home because we have all our friends and family here supporting. Even though the weather has been really weird, it feels really good to have the support,” said Escuadra.

The most noticeable difference for the Dolphins, aside from winning football games, was their bright pink jerseys. Head coach Jonas Escuadra said the team wanted to be different which inspired the color swap. The team has embraced their new threads which has also brought them a different mindset.

“We are rocking it and having fun with it; we think it’s awesome,” said Stanley on the new color.

The Dolphins wasted no time by scoring the games first touchdown on their first offensive series. Escuadra found Topasna in the red zone for the games first score, but a failed PAT only had Southern up 6-0.

Okkodo struggled to get their offense past midfield all first half.

The Dolphins started to march into Bulldog territory late in the 2nd quarter after a big interception from Topasna, but a turnover on downs near the goal line on the ensuing drive almost spoiled the Southern momentum.

“My coaches were calling the defense on the sidelines and I just listened to him,” said Topasna on the interception.

New jersey color, who this?: The Dolphins will sport pink jerseys this season. (photo by Robert Balajadia)

Dolphin Gabriel Naputi managed to pry the ball loose from Bulldog Conan Baza which Southern would recover just four yards away from pay dirt. Two straight runs by the bruising back Rosalin was enough to get the Dolphins a touchdown before the half, and a successful 2-point conversion from Escuadra to Topasna had Southern up 14-0.

Southern struck once more in the 3rd quarter as Escuadra laid out a perfect pass to a streaking Stanley, who caught the ball at the 40 and went untouched to complete the 80-yard play.

“[Ethaniel] is an awesome quarterback and he led me into that play,” said Stanley.

Okkodo started to gain momentum in the 4th quarter by getting as close as the Dolphin 30-yard line, but a couple of penalties resulted in a turnover on downs which Southern turned into the final drive of the game.

The Dolphins will travel to face the GW Geckos (2-1) next Saturday where winning streaks will collide. The Bulldogs will host the Titans on that same Saturday with Okkodo (1-2) and the Titans still searching for their first win (0-3).