The Friars dispatched the competition during the GSPN Boys Pre-Season basketball tournament with a 54-40 victory over the JFK Islanders in the championship game. Kyle Gaitan was named the game MVP with 23 points as the Friars used a huge third quarter run to take home the title at the FD Phoenix Center. 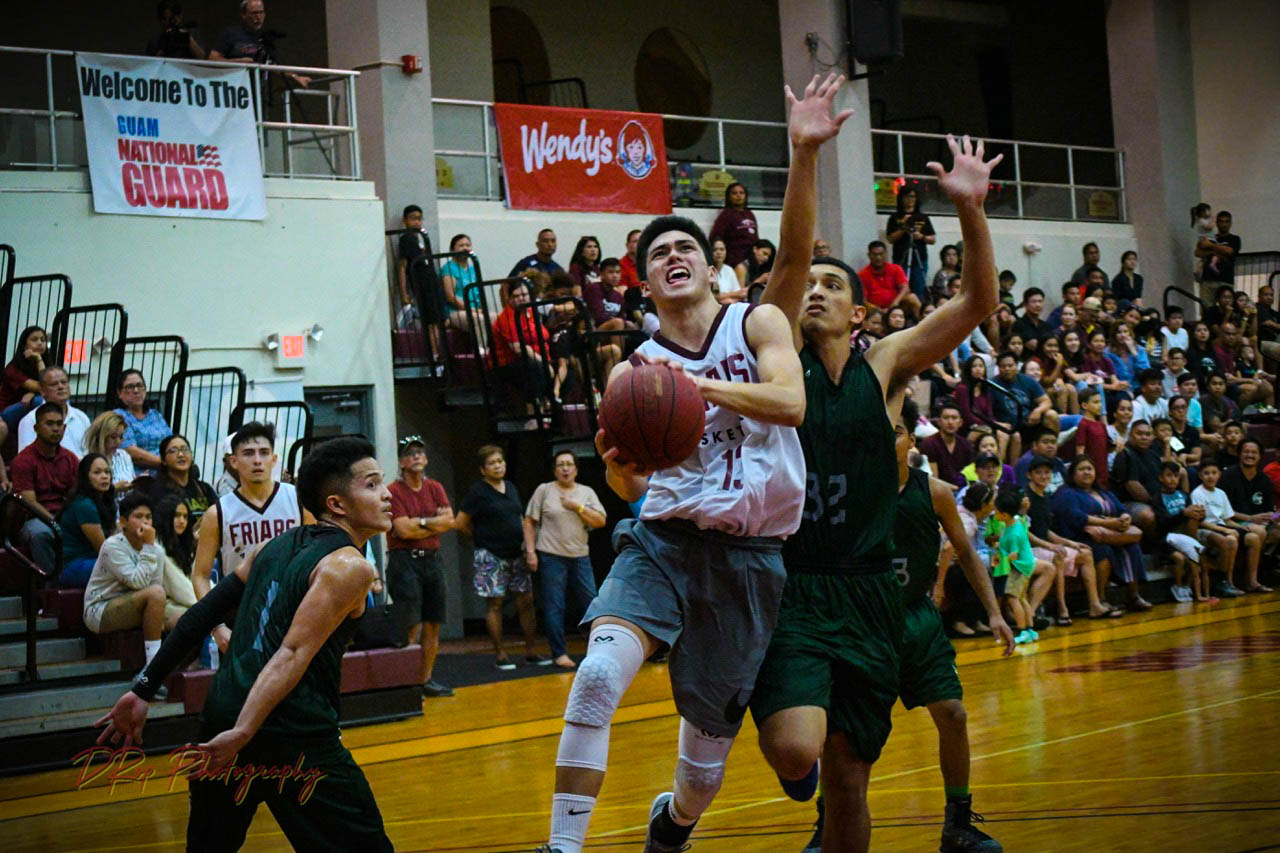 The FD Friars are the team to beat going into the IIAAG Boys Basketball season. The Friars dispatched the competition during the GSPN Boys Pre-Season basketball tournament with a 54-40 victory over the JFK Islanders in the championship game. Kyle Gaitan was named the game MVP with 23 points as the Friars used a huge third quarter run to take home the title at the FD Phoenix Center.

“It was a good tournament for us but we still have alot to work on,” said Gaitan. “We still need to improve our defense and we will continue to work hard in practice”.

The Islanders forced three early turnovers and went ahead 9-4 with Alschea Grape and Jonah Hahn providing much of the offense for JFK. FD countered just before the end of the first quarter with point guard Tomas Calvo finding Gaitan open underneath the basket to go ahead 11-10.

FD maintained a slim lead with Mark Temerowski scoring in the paint to start the second quarter. JFK recaptured the lead with Chris Morikami scoring off a steal to put the Islanders up 22-21.

FD closed out the on a 9-3 run with DeAundre Cruz and Gaitan scoring in the paint from offensive rebounds. FD called the run with Tony Quinene hitting a mid range jumper to go up 30-25 by halftime.

The Friars started the third quarter on a 9-2 run to go ahead 39-27. Cruz scored off an offensive rebound and Calvo swished a 3-pointer to open up a double-digit lead. The Islanders, who played three hours earlier against the Okkodo Bulldogs, looked a bit winded in the third period; scoring just six points as the Friars continued to pound the ball inside.

With Hahn in foul trouble, the Friars closed out the final period with Gaitan leading the way offensively to secure the 54-40 victory.

Gaitan stuffed the stat sheet with 23 points and 13 rebounds to earn the Wendys Player of the Game honors. Temerowski had 10 points, eight rebounds and four steals for FD.

“Hopefully this is the year the curse will be broken,” said Temerowski when asked if the Friars were able to be the first team to win the pre-season and the IIAAG championship.

“Some teams reach their peak at the beginning of the season, I believe we have more room to get even better; it’s just the beginning for us,” said Temerowski.

Grape had 15 points and seven assists for JFK; Nathan Chochol had a double-double with 10 points and 10 rebounds. Despite the loss, the Islanders go into the IIAAG season with a ton of confidence after a strong pre-season tournament.

“This pre-season tournament helped us gain a lot of confidence as a team, but there are still many things we need to work on such as help defense and rebounds. Going up against a big team like FD helped us recognize we need to really work on boxing out and getting rebounds,” said Grape.

The Islanders advanced to face the FD Friars earlier in the day after defeating the Okkodo Bulldogs 57-52. The Bulldogs led 31-30 at the break and looked to force a rematch with the Friars in the championship game but JFKs Hahn had a big third quarter to give the Islanders momentum.

Free throw percentage may have been the difference in the game with Okkodo shooting just 14 percent (1-7) from the charity stripe compared to JFK’s 73 percent (11-15).

The tournament major sponsors were the University of Guam and the Guam National Guard.