The FD Friars solidified their chances at home court advantage for the IIAAG Boys Basketball League playoffs after defeating the Okkodo Bulldogs 90-51, improving to 6-0 for the season. 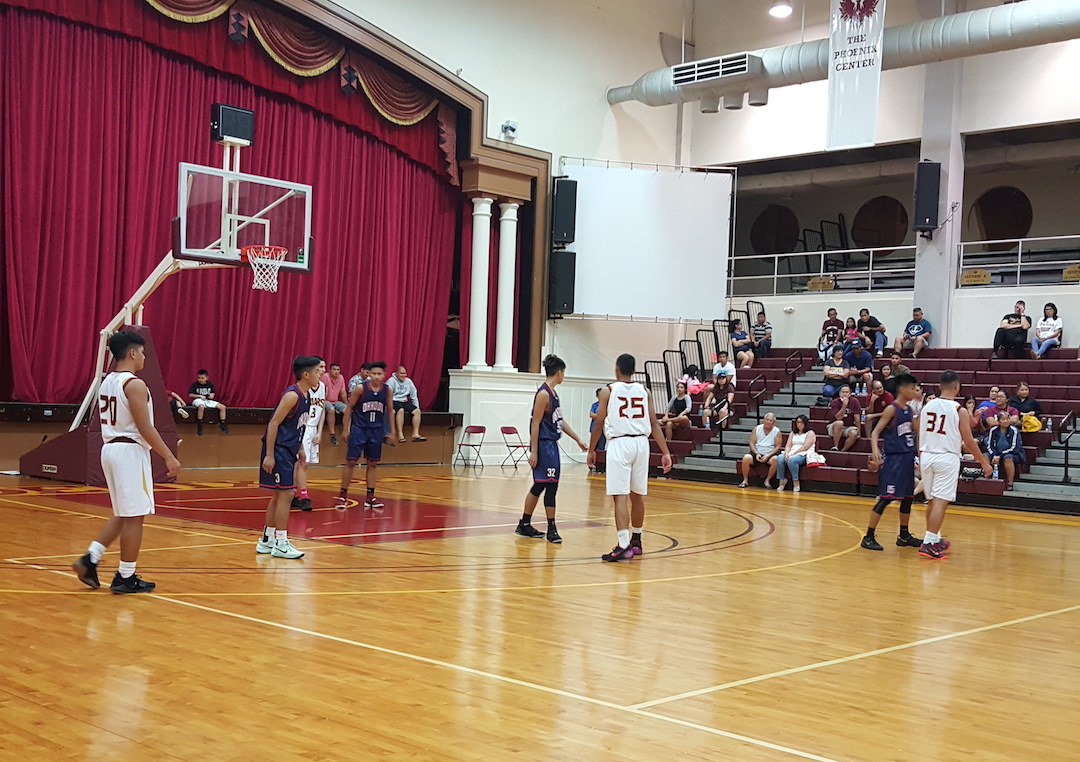 The FD Friars solidified their chances at home court advantage for the IIAAG Boys Basketball League playoffs after defeating the Okkodo Bulldogs 90-51, improving to 6-0 for the season.

Wendy’s Players of the Game: Mark Temerowski and Kyle Gaitan.

The pre-season champions have yet to be tested in the regular season, winning each of their games by 32 or more points. Defense seems to be the key for the Friar success with the Friars forcing more than 20 turnovers per game against the opposition.

Good defense sets up easy offensive opportunities and Kyle Gaitan was often at the receiving end. Gaitan made 7-9 field goals for 17 points, most of which came from transition points off steals.

Mark Temerowski also had a good game with 14 points, five assists and three steals. Temerowski said the teams in the Taga Division will likely present more of a challenge.

“We did a good job finding our groove against the teams in our (Gadao) division. Now that we’ve crossed over to face the other division, we need to start executing,” said Temerowski. The Friars will face the opposite division next week with Sanchez on Tuesday, St Paul on Friday and St John’s on Saturday.

The big game is next Friday at St Paul in a battle of unbeaten teams and a rematch of last year’s finals. The Friars will host another rival, the St John’s Knights, on Saturday. “It would be nice to win next week but our main focus is to develop better habits and work harder on our defense,” said Gaitan. “Our goal is to be a better team by the time the playoffs come”.

Okkodo’s point guard Ruedel Galang received a DNP due to an injury and looks to be back next week. The injury plagued Bulldogs played hard but turnovers were an issue. The Friars forced 11 steals in the first half to go ahead 43-29 by halftime.

Temerowski and Tomas Calvo anchored the defense with two steals each to lead the defense in the first quarter. Calvo drained a 3-pointer and dished out three assists as the Friars quickly went ahead by double digits in the first half.

Okkodo swing player John Michael Lorena had the hot hand early for the Bulldogs with seven points. Jonas Oyardo had five points by the break as the Bulldogs had to change their strategy at halftime to adjust to the Friar press defense.

The Friars continued to pressure the ball handlers in the second half and maintained their lead as the starters sat out the final period. Jonas Oyardo had a big fourth quarter for Okkodo but the deficit was too much for a comeback.

Oyardo had 16 points, making 4-6 three-pointers. Lorena scored 11 points, Antonio Crane chipped in seven points for Okkodo. The Bulldogs fall to 2-4 for the season and drop to fifth place in the Taga division. The top four teams in each division advance to the playoffs.

DeAundre Cruz and Brandon Soriano each scored 12 points for FD; Calvo had 10 points and four assists. The Friars have a two game lead in the Gadao division after improving to 6-0. The Guam High Panthers lost earlier in the evening to Sanchez and fall to 4-2 in second place in the division.

In the JV game, the Friars (6-0) remained undefeated with a 57-50 victory over the Bulldogs.

The Friars led 30-22 at halftime before the Bulldogs staged a comeback to trail by two points in the third period. Kobe Santos and Lenard Baul each hit 3-pointers for the Bulldogs to trail 35-37.

The Friars were not to be denied on their home court and had a big fourth quarter behind the offense of Cisco Uncangco and Colin Santiago. Uncangco helped the Friars take a nine point lead with a clutch three-point basket in the final period.