With a combined total of 78 points, the FD Friars/Academy Cougars set a new record by reeling in a GSPN Cup three-peat. With nine total IIAAG Titles won by FD and a strong playoff presence from the Cougars, the 2017-18 high school sports year was decided by a wide gap. 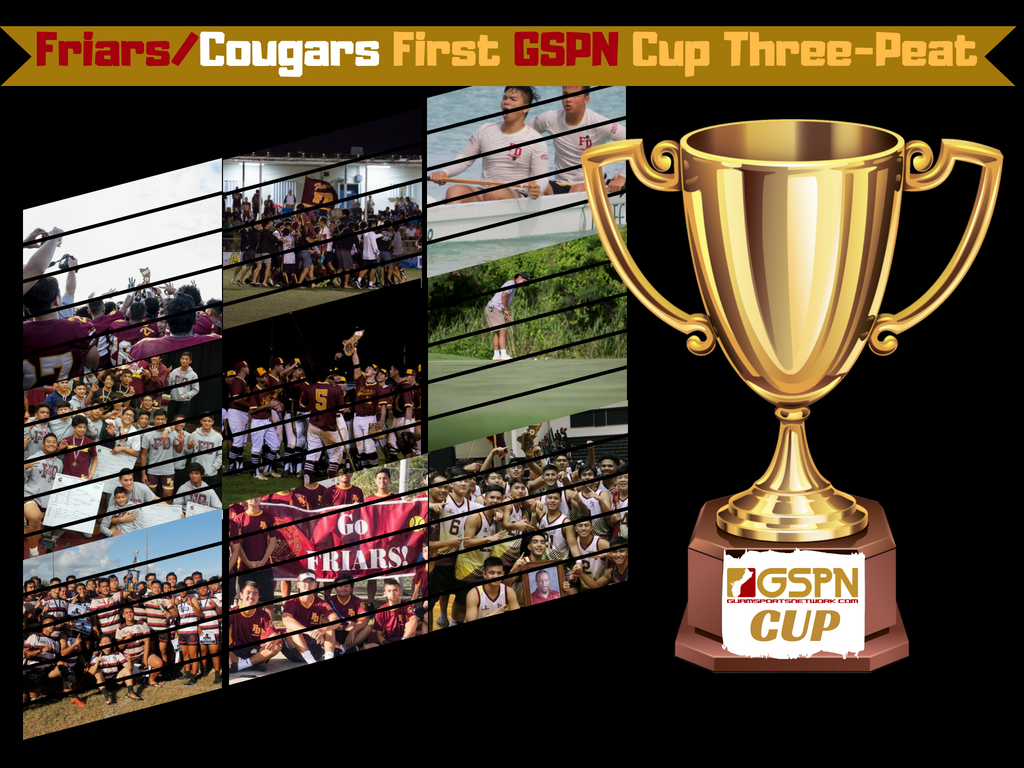 With a combined total of 78 points, the FD Friars/Academy Cougars set a new record by reeling in a GSPN Cup three-peat. With nine total IIAAG Titles won by FD and a strong playoff presence from the Cougars, the 2017-18 high school sports year was decided by a wide gap.

The Friars had picked up five IIAAG titles in the first two quarters and nearly tallied the same in the second semester, grabbing four. The FD students have been trending the term on social media claiming ‘The Year of the Friar’ since the 2015 season and they’ve proven so by creating a GSPN Cup Dynasty on top of their nine IIAAG titles from the 2017-18 season.

Review: The Friars proved unstoppable in football for the third straight year. The Guam High Panthers hit IIAAG highs behind coach Joe Taitano, securing both track titles behind the speedy Isaac ‘Savage’ Ventura and Emma Sheedy. The Friars took down the St. John’s Knights for a golf title. The Cougars dethroned the lady Knights as golf champs as well. The ND Royals displayed dominance in the title game against a young St. John’s Knights team, winning their first title since 1996.

Review: FD racked up three more titles with a dominant baseball win over GW in the finals, another wrestling title to complete three straight and overcome the higher seeded JFK Islanders in a wild soccer shootout. The Sanchez Lady Sharks added yet another wrestling title to their Dynasty and the St. Paul Warriors completed a perfect season by beating the Academy Cougars off a last second shot from Joniah Siguenza.

Review: A basketball title made it’s way back to St. John’s with the Knights overcoming the St. Paul Warriors in the big title game. A close battle in boys tennis ended in a tie-breaking win for the FD Friars as the Lady Eagles overcame strong seasons from the Academy Cougars and St. John’s Knights to get their first title in the 2017-18. The GW Geckos proved they were still the queens of rugby in the finals with MVP Jalana Garcia erupting in a wild comeback over the Cougars. FD’s Rugby team locked in their third straight title over the Sanchez Sharks. The JFK Islanders proved unstoppable all season as MVP Pillar George helped guide JFK towards softball royalty, winning three titles in the past four years.

Review: The FD Friars put an end to an exciting volleyball season by unleashing their offense on the Tiyan Titans, winning the school’s eighth IIAAG title. They added their ninth title by pulling off a victory over the Islanders and Sharks in Team Paddling. Guam High flexed their dominant track skills by sweeping both the girls and boys season. JFK racked up strong finishes in paddling winning the girls and mixed titles. The ND Royals flew by the girls soccer season, winning the title over the GW Geckos in dominant fashion.