The GW Geckos celebrated their homecoming Friday night with a 68-0 victory over the Tiyan Titans, avenging a regular season upset loss from last year. 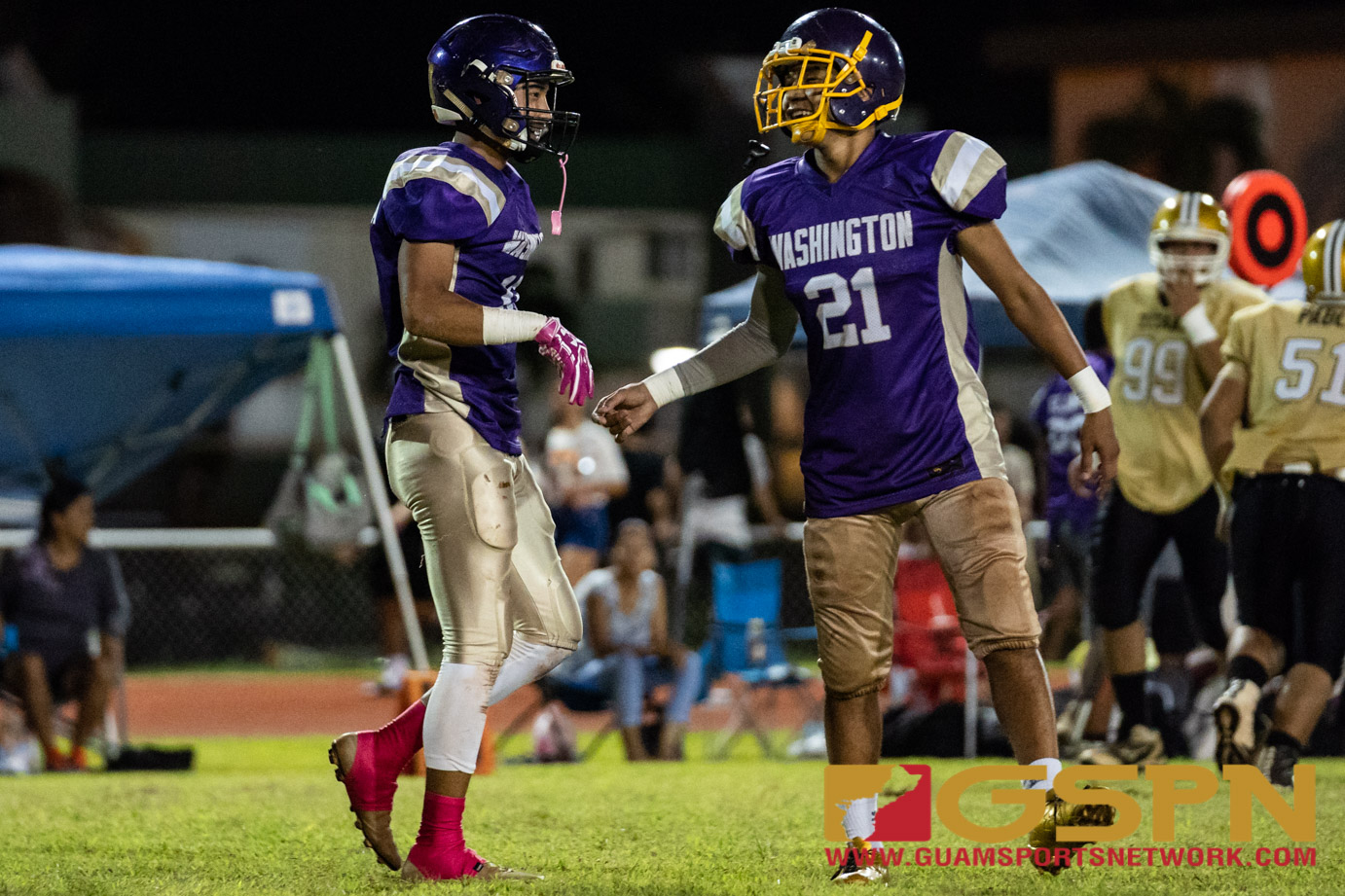 The GW Geckos celebrated their homecoming Friday night with a 68-0 victory over the Tiyan Titans, avenging a regular season upset loss from last year. The Geckos (4-1) remain tied in second place in the IIAAG Football League with the Southern Dolphins. The Dolphins take on the undefeated FD Friars Saturday night.

From the opening kickoff, the Geckos made a statement. Senior Aaron Jamanila gave the Geckos good field position with a 62-yard return. Jesse Manglona took advantage of the good field position and scored on the next play for a 24-yard touchdown. Gecko quarterback Ricky Macias provided the extra point kick for a 7-0 lead.

The Gecko defense was fired up taking the field and did not allow Tiyan’s star running back Kio Kaminanga any room to break away, forcing Tiyan to punt on fourth down.

With good field position once again, the Geckos go to their other running back Shelby Meeks and he wastes no time to get into the end zone for a 21-yard score. Meeks avoided three tackles en route to a 14-0 lead.

Tiyan looked to answer, but the GW linebackers read every play and stopped the Titans from advancing the ball for positive yardage. On fourth and long, the Titans managed to execute a good punt to the Gecko 21-yard line. Jamanila received the punt and followed his blockers, cruising down the left sideline for a 79-yard return. The extra point was no good, GW leads 20-0.

Titan quarterback John Angoco went to the air, but the Geckos read the slant pass and the Titans were forced to punt once again. Meeks looked to score, but his aggressiveness causes him to fumble at the goal line. Ryan Johnson from Tiyan recovered the fumble and the Titan offense took the field.

With their backs against their own end zone, the Titans looked for a big play in offense and went to the air once again. GW’s Cason Jackson intercepted Angoco’s pass at the 12-yard line and dashed into the end zone for a defensive touchdown. The Geckos went up 27-0 after a Macias PAT kick and the longest quarter in Tiyan’s season finally ended.

The Geckos scored a safety to start the second quarter with big number 77 Jose San Miguel recording a sack in the end zone. The Geckos regained possession and Jamanila rushes in for a 12-yard touchdown to go ahead 36-0.

The Titans finally grabbed a first down with Angoco calling his own number for a 13-yard run. The first down would be the last for Tiyan in the first half with the Gecko defense making stops.

The Gecko defense scored it’s second touchdown of the game after a bad snap that went over the head of quarterback Angoco. GW’s CJ Cabrera quickly tracked the football and trotted into the end zone for a 42-0 lead.

The Geckos scored another touchdown, a score by San Miguel from four-yards out to lead 49-0 at halftime. Heavy rain blessed the field at halftime as spectators took for cover. The rehearsed halftime show was cut short due to the heavy rain followed by high wind gusts.

Despite the bad weather conditions, the game continued. The Geckos ended the game with Meeks, Jon Espino and Ethaniel Cali each scoring touchdowns for a final score of 68-0. The Geckos are tied with Southern for second place in the League and improve to 4-1.

“As a team, we know what we can accomplish if we work together,” said Meeks. Meeks rushed for two touchdowns for 83 total yards on just seven carries.

Homecoming night for GW drew a large crowd on their home field with the bonfire burning in the distance.

“We play for the fans and for ourselves. I believe the more support we have the more the confidence in the team builds,” said Meeks.

The bonfire was extinguished after the heavy halftime downpour.

Jamanila had two touchdowns and 141 return yards. Espino anchored the defense with seven tackles and two tackles for losses. Espino also had a touchdown and 25 total yards rushing. Jerome Quichocho had two sacks for GW.

The Geckos suffered their first loss to the FD Friars in the first game of the season. The Geckos are not the same team from last month and are looking to get back to the championship game.

“Every day we are progressing; we have a stronger bond. The only thing we can we can do to get back to the championship is work hard and strive to be the top,” said Meeks. The Geckos will play the Sanchez Sharks next week at Okkodo. Playoffs start next month.