GECKOS TOO MUCH FOR BULLDOGS IN ONE-SIDED SCORING SPREE 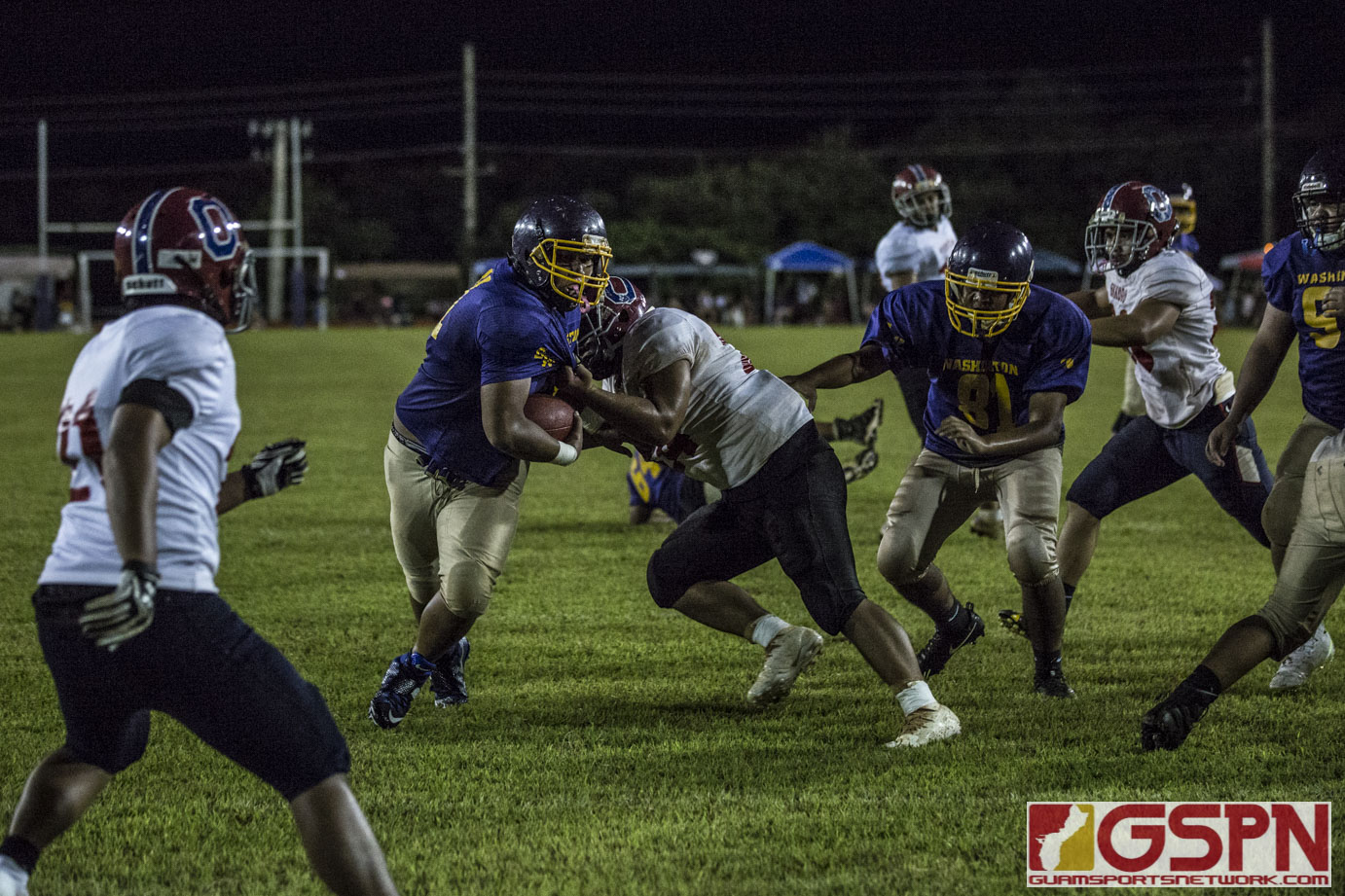 Jesse Manglona II and Shelby Meeks eached scored two touchdowns for the Geckos behind superb blocking from the O-line.

“Felt good to be out there but we are all still a work in progress,” said Meeks. Meeks scored his third touchdown of the season and rushed for 60 yards on seven carries against Okkodo.

Manglona carried most of the workload and recorded 84 yards on 13 carries for the Geckos. Both running backs look to fill the shoes of Calvin Aguon who graduated last year and so far they are living up to the expectations.

“We both want to go out there and help make an impact in the game,” said Meeks.

GW quarterback Ricky Macias found his favorite target Aaron Jamanila twice with highlight touchdowns from 18 and 19 yards out. “We made some mistakes last week and we are working at getting better in practice,” said Jamanila. Jamanila had three receptions for 39 total yards.

“That loss last week (against FD) gave us a fire and made us work harder as a team,” said Jamanila. Macias completed 5-of-10 passes for 67 total yards.

The Bulldogs were unable to find any rhythm on offense and managed to move the chains just two times in the second half. Conan Baza and Matua Borja managed to get first downs for the Bulldogs on the ground but the Gecko defense managed to force a pair of turnovers to end any hopes of establishing any sort of confidence.

The GW Gecko defense led by head coach Ryan Rios forced five total turnovers which included a safety, three fumbles and an interception. Gabriel Gilbert recorded a safety for the Geckos in the second quarter, their first safety of the season.

The Geckos defense scored a touchdown in the third quarter after defensive tackle Jose San Miguel hit the Okkodo quarterback in their own end zone forcing a fumble. Gecko safety Rico Mandilag recovered the fumble for the touchdown.

GW safety James Crisostomo later recovered another fumble that set up a Jamanila touchdown. On the ensuing possession, Jonah Garcia recorded the lone interception of the game to give possession back to GW. The last big play from the Gecko defense came in the fourth quarter with Ethaniel Cali forcing a fumble which was recovered by Jon Espino. Cali also recorded a sack for the Geckos.

Sophomore Davey Santos led the Okkodo defense with seven tackles which also included two tackles behind the line of scrimmage. Baza recorded five tackles on defense. Borja led the offense for the Bulldogs with 14 yards rushing on five carries.

San Miguel also had a rushing touchdown in the opening quarter. Macias was a perfect 6-for-6 on extra point attempts.

“It feels good to get a win today but we’ve got to keep working till the end,” said Jamanila.

“We lost last week’s game to FD because we gassed out so we worked on that (conditioning) during practice. There is some progress made but we still got a long way to go,” said Meeks.

The Bulldogs drop to 0-2 for the season and will take on the Southern Dolphins next week at Southern High. The Geckos are now 1-1 and will face the Guam High Panthers in a battle for the second seed.