The JFK Alumni squad handed the short-handed FD Elite their second straight loss in a best of three series, winning the Island Wide Alumni Basketball Title hosted by Guam Elite Basketball. JFK took Game 1 in a best of three, wrapping up the league with a title winning 80-67 score Saturday night. 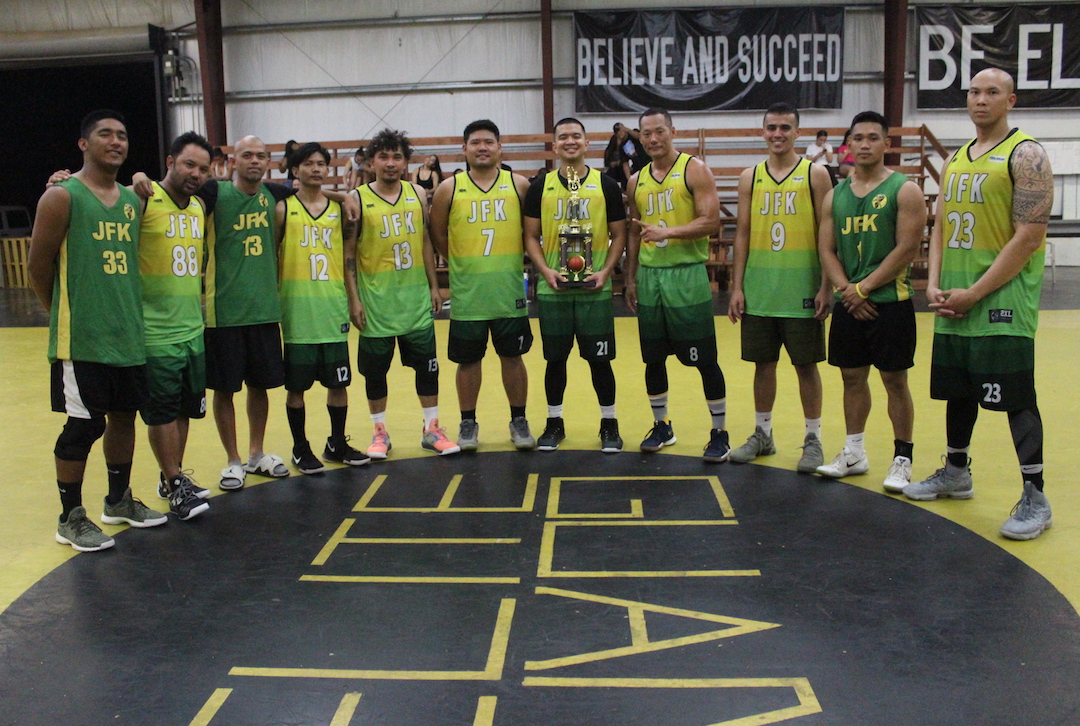 The JFK Islanders are the champions of the Islandwide All-Alumni basketball tournament after defeating FD Elite Friars 80-67 in game two of their best of three finals series. JFK took advantage of the short-handed Friars to win the inaugural championship at the Guam Elite gym Saturday night in Tiyan.

“We take a lot of pride when we all put on a JFK jersey. There was alot of good schools and competition in this league and we look forward to defending our title in season two,” said Islander Jin Han.

Han scored 10 points in the game but also played the role of player coach and helped develop a strategy against the short-handed FD Elite team which was without Vince Estella.

“Every one who plays basketball on Guam knows that if Vince is on the floor he makes an impact on both sides of the court. It may have been a different outcome if Vince came to play tonight but JFK came to play tonight,” said Han. “I have to give it up to FD with Will (Stinnett) and Dom (Sablan) playing hard and never giving up. We tried to pull away but they played hard till the end”.

JFK’s JP Cruz and Billy Belger provided much of the offense for the Islanders as they got hot in two big runs that helped their school pull away in the second half.

“We saw they were short so we decided to push the pace and play JFK basketball,” said Cruz. Cruz made transition baskets and recorded a pair of second half assists to Belger who made four three-pointers in the second half.

FD’s Shawn Perez matched the sharp-shooting Islanders in the first half, draining 3-of-5 three-pointers to trail by 10 points at halftime. The Islander bench came in and ballooned the lead to 20 points with Kurtis Silva and Wayne Jesus making three-pointers with six minutes left in regulation.

“I’m blessed to play basketball at this level in this stage of my career. I’m looking forward to another season next year for JFK,” said Cruz.

The Cougars were in total control until the final two minutes of regulation. Academy’s Brianna Benito and Kara Duenas helped build a commanding double digit lead with points in the paint.

Haley Senne from St. Paul cut the lead to 50-46 with a minute remaining. The Warriors were forced to foul. Derin Stinnett went coast-to-coast after Duenas missed the second free throw to the lead to 51-48.

The Warriors Chloe Miranda records a steal on the inbound but St. Paul was unable to score as the were forced to foul. Colleen Blas made both free throws with 10 seconds remaining to end the game at 53-48.

Derin Stinnett had 20 points to lead the Warriors. Duenas led all scorers with 22 points, Benito added 15 points for the Cougars. Academy now advances to the women’s alumni championship game against team Fuesta. The championship game is scheduled for next weekend.