On a day where they’re set to play in all three GNYFF title games, the Manha Angels got Saturday afternoon at the Angel’s Field started on the right foot as Tyler Salas found the end zone three times in their 21-0 win over the Southern Cowboys to capture their SEVENTH straight Manha title. 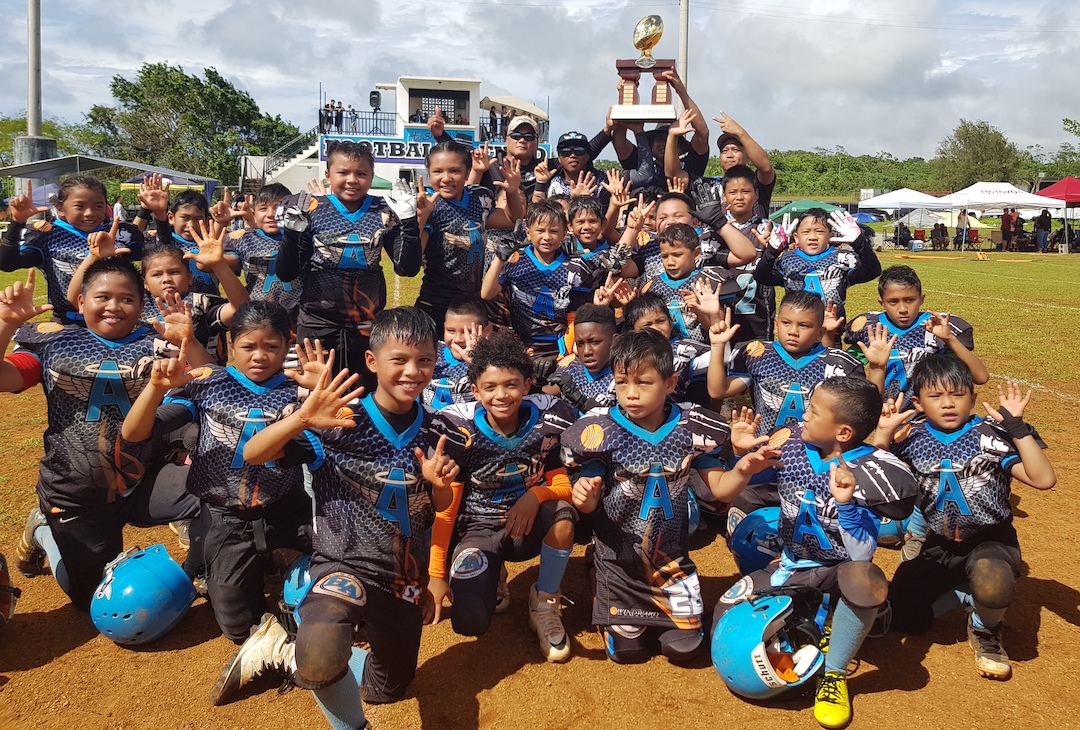 On a day where they’re set to play in all three GNYFF title games, the Manha Angels got Saturday afternoon at the Angel’s Field started on the right foot as Tyler Salas found the end zone three times in their 21-0 win over the Southern Cowboys to capture their SEVENTH straight Manha title.

UPDATE: The Angel’s won the Metgot Division title 14-8 over the Raiders.

Their regular season meeting was the most entertaining Manha game all season with the Cowboys storming back to stun the Angels 41-35. The biggest difference in Sunday’s title game was a healthy Tyler Salas for the Angels. Salas scored four Angel touchdowns before making his exit after throwing up on the sidelines in the regular season. Sunday, Tyler wasn’t going to allow himself to miss any action.

“I paced myself today,” said Salas on his approach. “I felt really happy that we were even in the championship and this is my first one that I won so I’m really happy about that. I wanted to win this game against the Cowboys because I didn’t get to play the whole game last time.”

It all came down to pace for the Angel’s coaching staff after realizing the team burnt out in their first meeting. They also realized where the Cowboys offense liked to run the ball and the Angels were ready to make those defensive adjustments.

“The first loss made us a better team. [The Cowboys] have a really powerful offense so we knew we couldn’t wait for them to come to us and that we needed to go after them. So we took a chance and attacked them to try and stop them,” said coach Bill Shiroma.

The Angels were eager to start strong after three straight hand offs to Salas eventually led to a 25-yard touchdown run, going up 7-0 after Salas followed up with a successful PAT.

Two big tackles from Dominic Tolliver and a fourth down stop from Jhordan Lujan put the ball right back in the Angel’s hands at midfield. Salas needed just one carry to take the ball 38 yards up the right side of the field to quickly extend the lead to 14-0.

In the 2nd quarter, the Cowboys were marching down field after a 15-yard run from Javin Meno to get to the 20, but a wide open pass play from Meno at quarterback was dropped in a must-convert situation. A false start on fourth-and-five pushed Cowboys back to fourth-and-ten as their run up the middle proved five yards too short for another turnover on downs.

Salas opened the drive off the turnover by hitting teammate Christian Benavente on a pass play for a gain of 20 yards. A fake hand-off to Salas freed up the right side for Elias Aguon as the speedy back rushed all the way to the three-yard line. Salas used a quarterback keeper to finish off the drive for his third touchdown on the day from three yards to extend their lead 21-0 before the half.

The Cowboys opened the 3rd period with a long drive where they collected three first downs, but a broke play on 4th down inside the 20 resulted in a turnover on downs. Their lone drive ate up the entire 3rd quarter with the Angels not getting a chance to even touch the ball in the period.

The Cowboys struggled to get their offense going in the final quarter after three fumbles, none lost, halted their movements. A final turnover on downs near midfield allowed the Angels to take the season’s final knee to lock up the Manha Division for the seventh straight year!

“I want to thank all my coaches, family and God for everything they’ve done for me,” added Salas.