It was a busy afternoon for the Angels as they managed to take three trophies home after the Matua division Angels won against a determined Steelers squad. 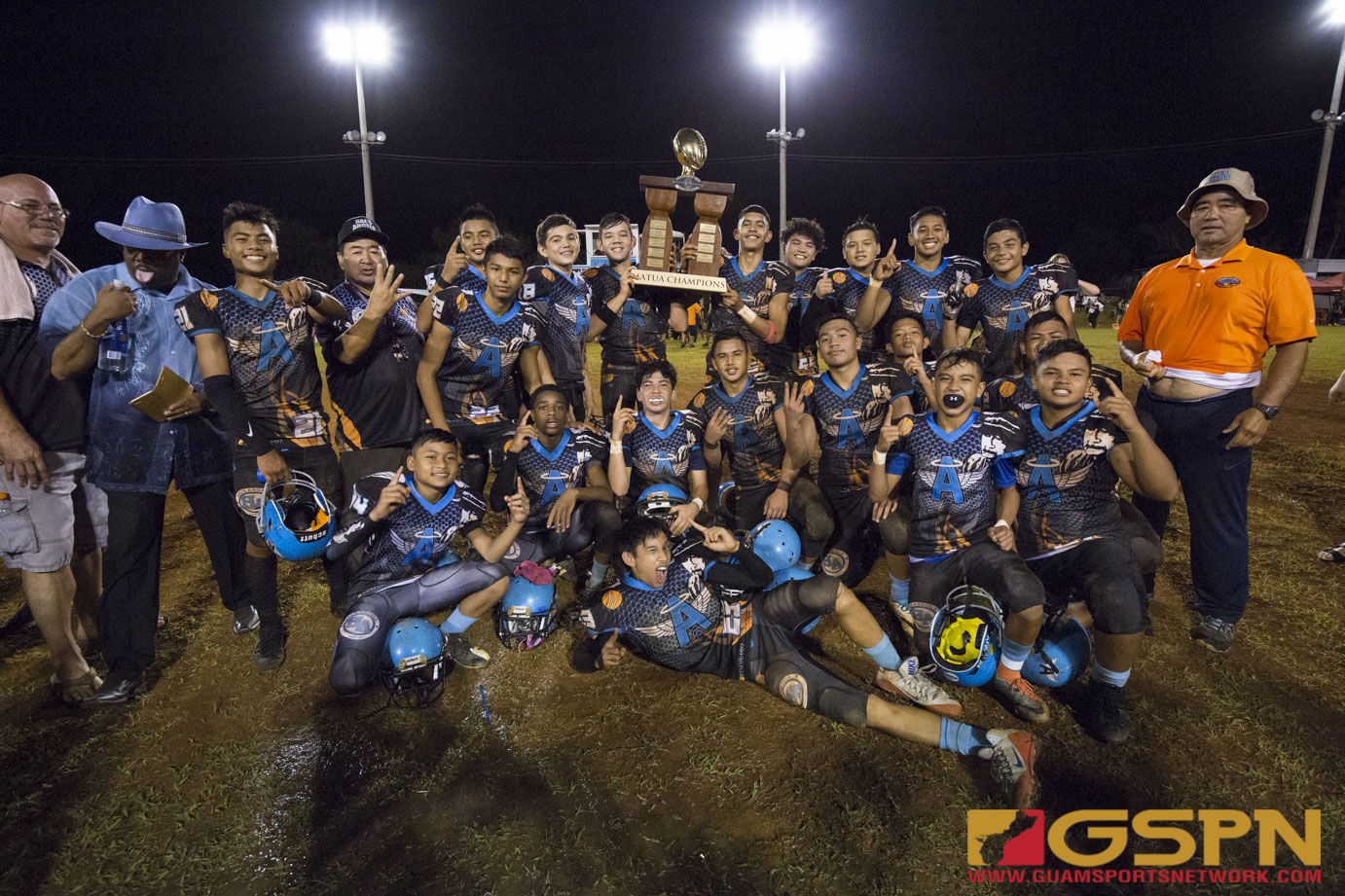 It was a busy afternoon for the Angels as they managed to take three trophies home after the Matua division Angels won against a determined Steelers squad. This victory completed a total sweep of every GNYFF division for the club this Saturday. In the Matua Division, the Angels defeated the Steelers 20-16.

The game was a competitive match to the very end, with the lead changing hands three times in the fourth quarter alone, but in the end, the Angels emerged victorious after a 60-yard passing touchdown from quarterback Darren Cepeda to Marcus Camacho to give their team a lead that they wouldn’t give up until the final whistle.

“I just took advantage of the open field and looked for the end zone,” said Camacho on his game-winning touchdown score.

“We knew the Steelers were a great organization, and we knew they were going to bring it. We just had to keep the fighting spirit in ourselves, stay composed, follow our coach’s game plan, and execute,” said Cepeda.

The game started late due to technical difficulties with the lights, and just like the lights, the Angels were slow to start up. They came out aggressive, calling an onside kick to open the game, but it quickly turned south for the Angels as Steelers’ blocker Pierce Pangelinan recovered the kick and burst through a gap in the kickoff wall to give the Steelers the ball at the five yard line, which Adin Lumba took advantage of. Lumba put the ball through the uprights as well, making the game 8-0.

The Steelers defense took advantage of the momentum on the next drive as they stopped the runs at line and stripped the ball free after a completed pass that would’ve given the Angels a first down. Following the dominant defensive showcase, the ball was put into the hands of Adin Lumba, who took his team down into the red zone. Lumba came out on the next play looking to score, but Darren Cepeda knocked the ball loose from his hands and the Angels recovered.

After an extraordinary effort on defense, Cepeda walked his offense up to the line, determined to score. Cepeda threw a flare pass to Marcus Camacho, who turned it up for a first down. The Angels then put the ball into the hands of their power back, Jonathan Sablan, who trudged his way through the ‘Steel Curtain’ for a first down. The Angels then lined up again, faking it to Sablan, but giving it to Noah Medler who ran his way past the Steelers secondary into the endzone. The Angels’ kick from Ethan Sablan was good, which tied up the game 8-8.

The Steelers made no effort to hide who the ball would be going to on the next drive, as they put it into the hands of Lumba, who danced his way down the field, finding himself near the red zone. Paco Toves put the Angels on notice as he broke through to the first down markers, putting them dangerously close to the end zone, and Lumba attempted to cap off the Steelers’ possession with a touchdown, but a penalty called back a run that would’ve given them the lead going into halftime.

Instead, the Angels were given a chance to redeem themselves, and they managed to do that, keeping a pass from Lance Muna-Aguon from finding the hands of Kekoa Gamboa, closing out the half.

It was still anyone’s game coming out in the second half, and the Angels came out determined to take over. Cepeda lined his offense up, and dumped it off to Marcus Camacho who went to work, clearing the first down markers. The Angels then went to their two-headed monster of Austin Aguon and Jonathan Sablan. Aguon soldiered his way for the gritty yards, and Sablan ran a counter for major yards, putting his team within striking distance of the end zone.

After a touchdown from Sablan was called back due to a blocking foul, Aguon made up for it by diving into the end zone to give the Angels the lead. The ensuing kick from Ethan Sablan would fail to find the back of the uprights however, after a surging Steelers defense blocked the kick, keeping the score 14-8

The Steelers and the Angels exchanged possession of the ball on the next two drives, but, when given the ball again, the Steelers came out with an ‘all-or-nothing’ mentality. Lumba came out, ready to prove that he was not ready to go home, as he pushed his team down for 15 yards. Muna-Aguon then threw a bubble pass to Kekoa Gamboa, who broke his defender and danced his way for a new set of downs.

The Steelers then looked to Julian Bamba to power his way through the front line, and he succeeded, putting the Steelers at the four yard line. The crowd began to ignite as Muna-Aguon rushed his team up to the line. The ball was placed into the hands of none other than Adin Lumba, and he ran into the end zone to tie the ball game up. The Steelers then lined up their field goal team, looking to get the lead with less than 2 minutes left to play. Lumba kicked the ball through the uprights, giving the Steelers a 16-14 lead.

The Angels kept their composure and looked to do nothing else but get the lead back, and that responsibility was given to Darren Cepeda, who scrambled out of the pocket for a first down. Cepeda then threw a pass to receiver Jayven Mendiola, to move up to the sixty yard line. Cepeda then set up the offense and threw a short pass to Marcus Camacho, who turned up and juked his way around three defenders on his way into the end zone as the Angels sideline erupted in cheers. Ethan Sablan lined up and kicked in another field goal to give the Angels a lead of 20-16.

The Angels were less than a minute away from securing the title, but they had to endure the Steelers’ defense for that time. The Angels would not be denied their title, however, as they managed to stop Lumba in the backfield, forcing the Steelers to look to the air. Muna-Aguon dropped back and threw a high ball down the field, but, from there, it was picked off by Darren Cepeda, who sealed the game for the Angels.

“Everything that we worked hard for, and everything we did this whole season came down to those moments.” said Cepeda when asked to comment on the emotions of the final moments of the game.

“[The Steelers] came out ready to play and they gave us a fight. They’re a great team, but thankfully we came out with the win.” said Austin Aguon.