Sunday afternoon in the Metgot playoff match between the Eagles and the Outlaws, the Eagles found themselves exiting the playoffs early at the hands of the lower-seeded Outlaw team. The Outlaws were able to capitalize on a few Eagle mistakes and turn them into to touchdowns to give them the 20-12 victory. 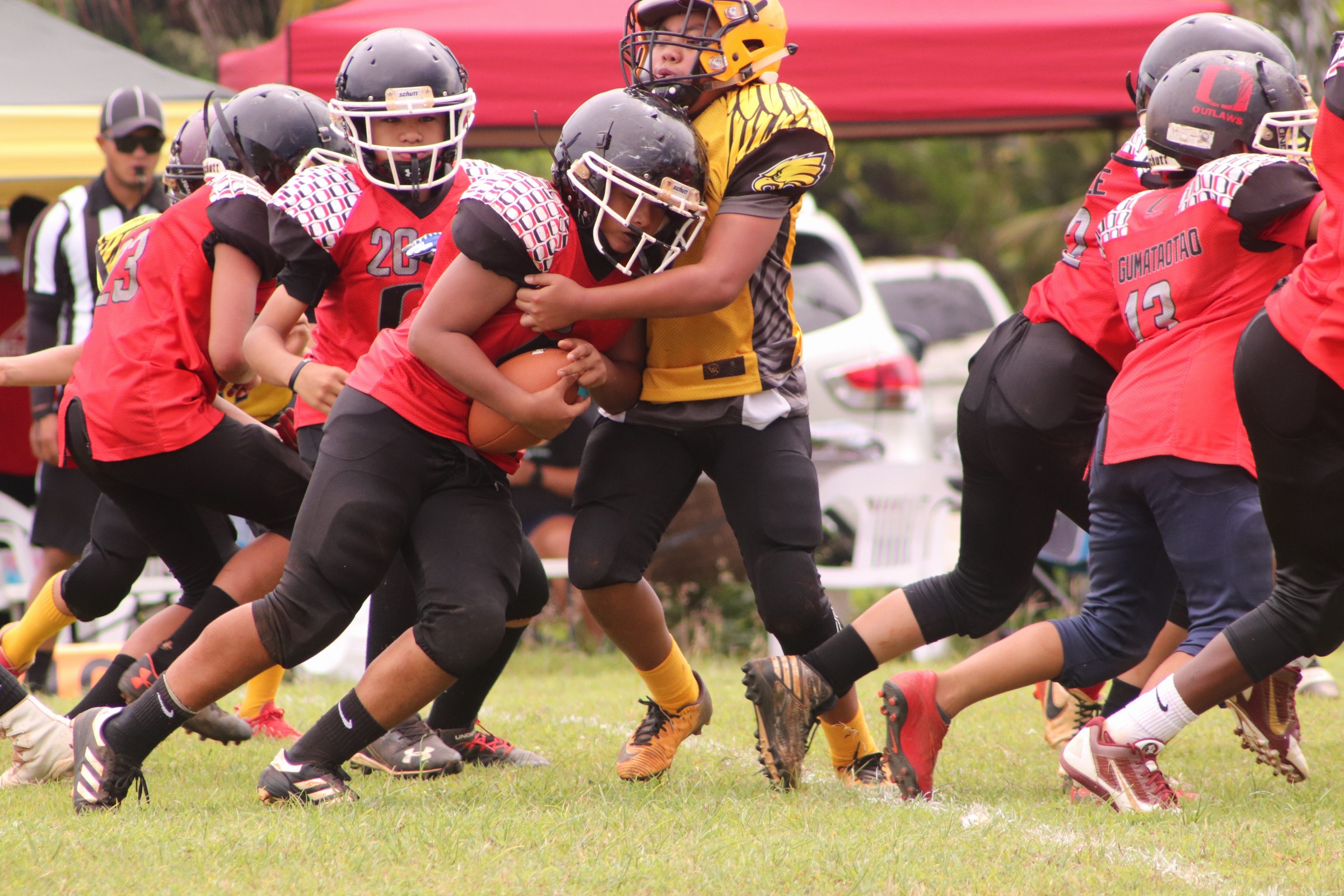 Sunday afternoon in the Metgot playoff match between the Eagles and the Outlaws, the Eagles found themselves exiting the playoffs early at the hands of the lower-seeded Outlaw team. The Outlaws were able to capitalize on a few Eagle mistakes and turn them into to touchdowns to give them the 20-12 victory.

The Outlaws narrowly avoid elimination as the defense was able to neutralize the usually productive throwing talents of Eagles quarterback, Kaleb Salas and hold their running game to short gains. The Outlaws saw multiple great performances in their run game.

Running back Kyle Salas broke away for huge gains that put his team in good scoring positon, and Brielle Naputi and Landon Castro would both cap off of Salas’s big runs.

“Our coaches told us to stay humble and to keep working hard. They told us what to do and it helped us keep the other team back,” said Kyle Salas.

“Our coach told us to run to the weak side and take advantage of what the defense was giving us.” added Castro.

The Outlaws struggled to get their offense going on their first drive, and the Eagles took full advantage of that as Kevin Beckwith III caught an interception and returned it for 60 yards for the first score of the game. The Outlaws defense had an answer of their own, however, when defensive tackle, Rai Peredo, scooped up a bad Eagle’s snap and took it with him into the endzone to tie up the game.

Both teams would fail to find the endzone for the rest of the half due to great defense, but the same couldn’t be said for the second half as the Outlaws backfield began to heat up. After a 40 yard Kyle Salas gain moved the chains, Brielle Naputi put the Eagles defense behind her on the ensuing play before getting stopped at the 4 yard line. Naputi then capped off the drive with a touchdown off of a dive straight up the middle.

With the Eagles being down for the first time of the match, the offense turned to their air game as quarterback, Kaleb Salas flaunted his arm strength in a 50-yard touchdown to Marcello Blas, who burned the Outlaws secondary on his way into the endzone. This, however, wouldn’t be enough to tie up the game, as a failed point-after attempt kept them behind 13-12.

Eager to build their lead, Outlaws running back, Kyle Salas found running room and brought his team up to the Eagle’s 40 yard line, but the Outlaws failed to convert and gave the Eagles a chance to take back the lead. The offense put their hopes in Kaleb Salas to fire another bomb down the field, but a long pass was picked off by Christopher Angoco, who returned it for thirty yards. The Outlaws now had a chance to put the Eagles behind them, and Landon Castro took the opportunity by pounding in a touchdown to build up their lead to 20-12.

The Eagles had one last chance to get back into the game, and looked to Kaleb Salas for one more throw to help his team catch up, but the Outlaws blanket coverage made it hard for Salas to connect. The Eagles tried one last time to catch the defense off guard and attempted a flea flicker to Kevin Beckwith, but his throw went straight into the hands of the Outlaws, who went down and took a knee to end the game.