In a tightly contested Metgot matchup, the Raiders managed to come out on top 8-6 in a tough muddy battle against the AM Insurance Steelers. 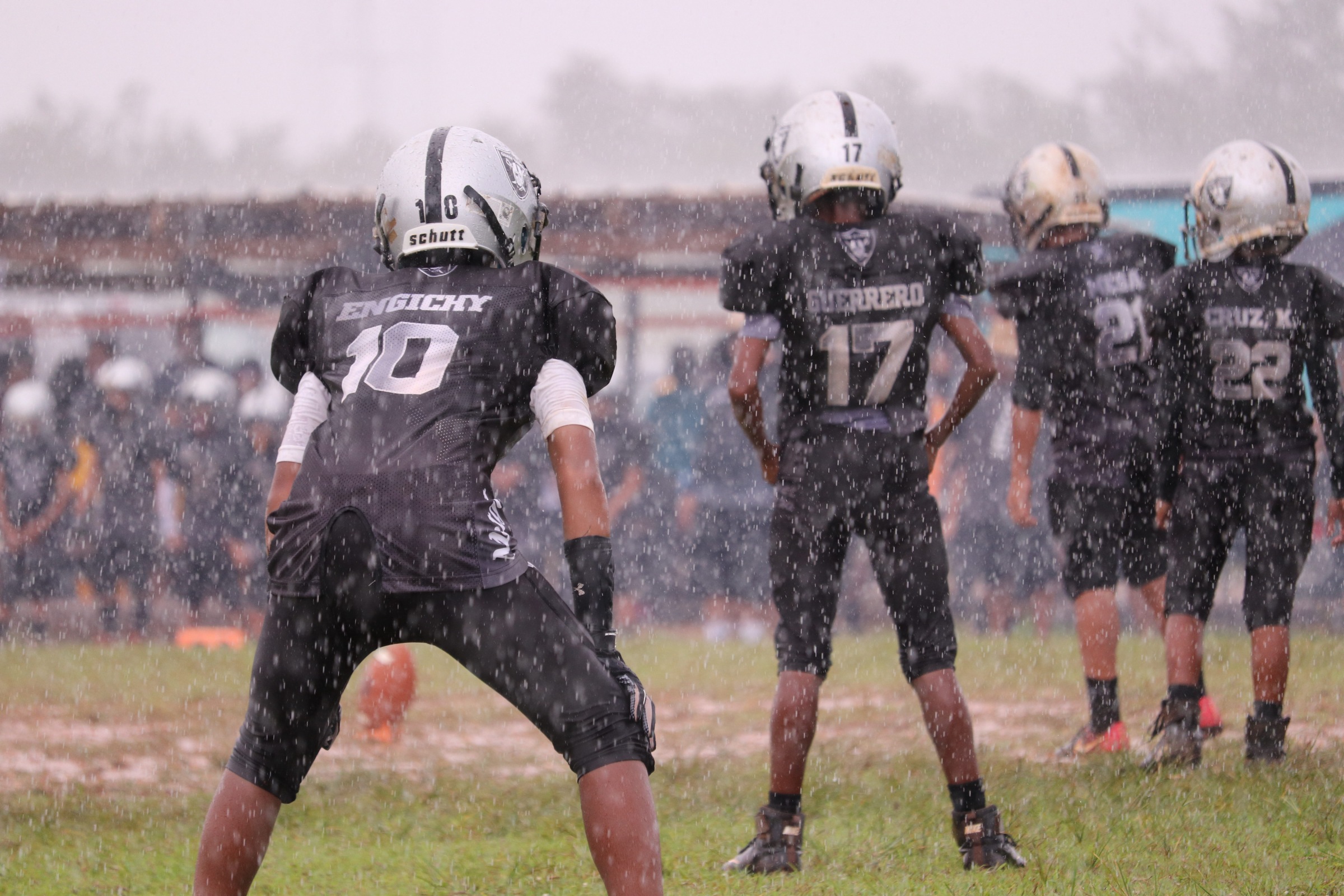 In a tightly contested Metgot matchup, the Raiders managed to come out on top 8-6 in a tough muddy battle against the AM Insurance Steelers. After a game-saving interception by cornerback, Aiden Palacios, the Raiders managed to punch in a game-tying touchdown through the sheer willpower of running back Tristan-Jay Burgos, which gave the Raiders kicker, John Joseph Cabrera, the opportunity to kick in the game-winning field goal.

“We practice [kicking] every Friday for the whole practice, and all the hard work paid off. When the ball was snapped, I thought one of the Steelers were gonna block it, but I just put my head down and watched it go through the uprights.” said Cabrera on the field goal that punched his team’s ticket to the championship.

This game sets the stage for the Raiders to matchup against Hal’s Angels for the championship, a matchup they have been looking forward to.

“We got to get to practice and dig deep” said Palacios.

“We have to get back to the grind for the championship” added Burgos.

As the rain began to pour down, the two teams went to work, trying to move the chains down the field, but both sides found difficulty gaining footing in the mud as runners and defenders alike found themselves slipping. Once the Steelers became acclimated with the harsh conditions, they began to let loose their thunder and lightning duo of Josiah Nauta and Isaiah Ngirarois.

Nauta pounded his way through the line and Ngirarois broke to the outside, trying to find daylight. The Raiders defense bent, but refused to break as defenders Kassmirh Engichy and Ethan Guerrero began to stop pitches to Ngirarois in the backfield, keeping them away from the end zone.

The Steelers were forced to punt and managed to pin the Raider up against the wall with little time on the clock. The Raiders, attempting to score before the end of the half, turned to quick screens to try and move the chains, but Josiah Nauta made an outstanding read and picked off the pass for a pick six, giving his team the lead. The Steelers failed to convert as the half drew to a close.

Nauta continued to inch the chains up, ever so slightly, meanwhile, Ngirarois found big runs in between negative yardage plays. Going in to the fourth quarter, the Steelers were looking to secure their win, while the Raiders were looking to get the win, and Aiden Palacios succeeded when they needed him the most, as he caught a tipped pass and ran it for eighty yards, stopping just short of the goal line.

Tristan-Jay Burgos dove up the middle, and after a penalty flag was waived off by the referees, the Raiders had tied the game up 6-6. The whole field fell silent as John Joseph Cabrera lined up the kick, and as the ball slipped through the uprights, the entire Raiders sideline erupted. The Steelers were given one last attempt to win the game, but a desperate pass from Isaac Iriarte was picked off by Javin Cruz to seal the victory and bring them to the championship.