MIN EXPLODES FOR 49 IN KNIGHTS COMEBACK WIN OVER ISLANDERS

The St. John’s Knights got a career night from star Michael Min as he erupted for 49 points in the teams come from behind victory over the JFK Islanders. 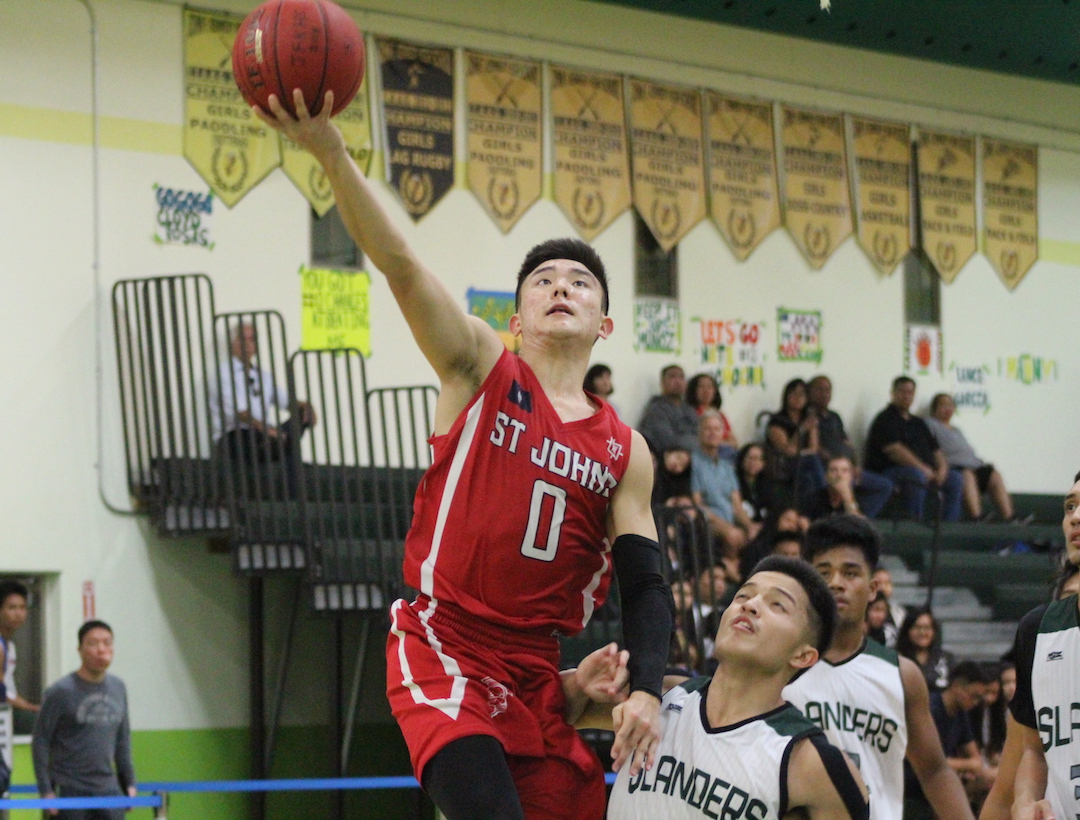 When St. John’s guard Michael Min was notified that he scored a IIAAG career-high 49 points on the night, not even he could hold his jaw from dropping. The box score was one thing, but Min’s heroic effort to will his team from down double-digits to a thrilling 86-79 victory over the home team JFK Islanders Friday evening was all he really cared about.

Min put the team on his back in the first half where he scored 20 points, but they still trailed 42-33 by halftime thanks to a defense fuelled 17-4 run by JFK in the 2nd period, highlighted by three straight triples from Islanders sharp-shooter Cloyd Rosas.

“We had two conscious decisions to make, give up or fight back. We made the conscious effort to fight back. With everyone on the same page, we swung the ball and the energy was wild. We shut the gym down and made the crowd go quiet; it was awesome,” said Min on the second half turn around.

The Knights were quick on the catch up as Min converted two layups, plus the foul, before then finding Tony Hsieh in the corner for one of his four big three’s in the 3rd period. Hsieh’s jumper cut the lead 48-44 with still 5:35 left to play in the 3rd.

Min would give the Knights their first lead since the six-minute mark of the 2nd period on a drive to the bucket, pulling ahead 53-52. Another stop-and-pop jumper from Hsieh at the top of the key gave the Knigths a 63-52 advantage as they outscored JFK 30-10 in the period to seize momentum.

JFK had battled back after two layups by Grape late in the 4th trailing 71-67, but two big layups from Min, plus another three from Tony Hsieh, were all the Knights needed to stay ahead. Min was perfect from the charity stripe, going 18-of-18 behind the line, including six straight in the 4th to ice the game.

Min’s night was nothing short of spectacular, but the senior guard was quick to compliment the other red jerseys on how they managed to pull out a tough victory.

“Everyone shares the scoring load, tonight just happened to be my night. I literally give everything to my team. The past few years have not been working out, but we’re finally starting to click together. I’m glad to see that everyone has set their egos aside, including myself, and play as a team.”

Knights Tony Hsieh erupts after hitting a three-pointer to give his team their largest lead of the game. (photo by Robert Balajadia)

Hsieh would finish with 24 points, including six bombs from down town. JFK was led by Alschea Grape’s 18 points.

Pulling out the tough win wasn’t only a testament to the St. John’s talent, but gaining valuable mettle early in the season can only bode well for the all-or-nothing Knights.

“We want to win a championship, there’s no secret about that. Battling back from adversity is big every game. We’re looking to win every single game, but we treat every game the same. With every game and team, we’re going to try and dominate,” added Min.

JFK will be looking to redeem themselves Saturday as they host the Southern Dolphins while the Knights pack up for a trip down South as they prepare to face off against the ND Royals also on Saturday.

The Islanders bottle up Knights Takumi Simon as he attempts to get to the basket. (photo by Robert Balajadia)

Islander Cloyd Rosas watches as his third straight three-pointer goes in as part of a 17-4 JFK run in the 2nd period. (photo by Robert Balajadia)

Isander Aaron Munoz gets an easy bucket off a dish from Grape in the 1st quarter. (photo by Robert Balajadia)