The Raiders and Eagles met for the second time this season in the Guam Varsity Football League and in this rematch, the Raiders who would walk away with the victory  after big performance from quarterback Danny Manibusan, who found his receivers in the end zone on two occasions to lead the Raiders to a 14-6 victory. 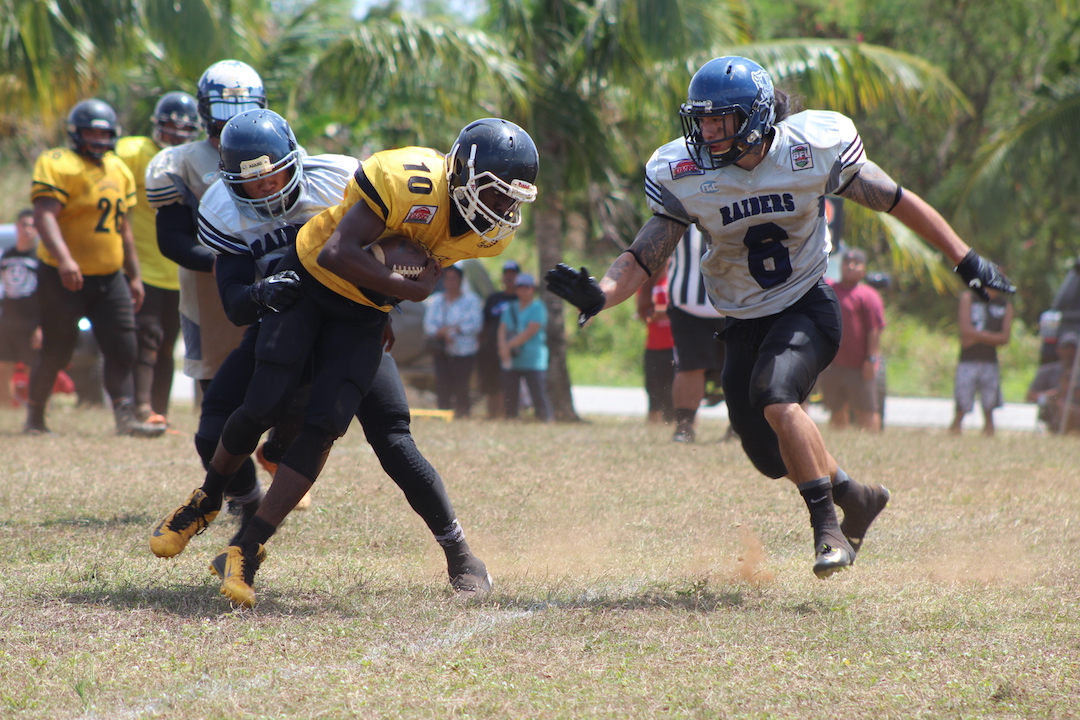 The Raiders and Eagles met for the second time this season in the Guam Varsity Football League and in this rematch, the Raiders who would walk away with the victory  after big performance from quarterback Danny Manibusan, who found his receivers in the end zone on two occasions to lead the Raiders to a 14-6 victory.

After consecutive three-and-out drives from both teams in the first quarter, the Raiders were able to find their groove after their defense forced a fumble to start off the second quarter. After a moving the chains on the ground, the Raiders offense took to the air and found the end zone with Danny Manibusan connecting with Storm Rosario for a 30-yard touchdown. Kicker Chris Santos brought the score to 7-0 to end the first half.

“We just looked for the openings, whether it be on the ground or in the air, and took advantage of them. We took whatever the defense was giving us. Personnel wise, we saw a couple new guys swap in and just took advantage of that.” said Manibusan on the adjustments they made after a scoreless first quarter.

The second half saw both defensive secondaries making key plays to prevent major gains in the air. Despite the blanket coverage from the Eagles, Danny Manibusan dialed up a deep bomb to receiver Jesse “Pumpy” Manglona, who made a spectacular grab in the corner of the endzone to haul in the 35-yard touchdown, making the score 14-0.

Trailing two touchdowns, the defending champion Eagles needed to respond quickly. On the ensuing drive, the Eagles were able to march up out of their own territory to the Raiders 45 yard line. From there, they handed it off to running back, Travis Herron, who would bounce out and break away for the 45 yard rushing touchdown.

After a failed 2-point conversion, the score would remain 14-6 for the remainder of the game as the Raiders defense would shut out the Eagles and prevent them from finding the pay-dirt again.

“I have to give it up to the offensive line. They gave me the time in the pocket to pick a part the receivers and for the running backs to find the holes, so our line did a good job today and we wouldn’t have had the success we did without them.” Manibusan said on what the key to their success was.

With this victory, the Raiders secure the first place seed going into the playoffs with an undefeated record of 6-0, while the Eagles maintain the second seed.

The Eagles air game didn’t find too much success against a stout Raider secondary. (photo by Robert Balajadia)

Eagle Danon Mojica gets caught in the backfield for a loss. (photo by Robert Balajadia)