The Tiyan Titans were crowned the 2018 Boys High School Pre-season Volleyball tournament champions with a three set victory (25-21, 16-25, 15-8) over the FD Friars. 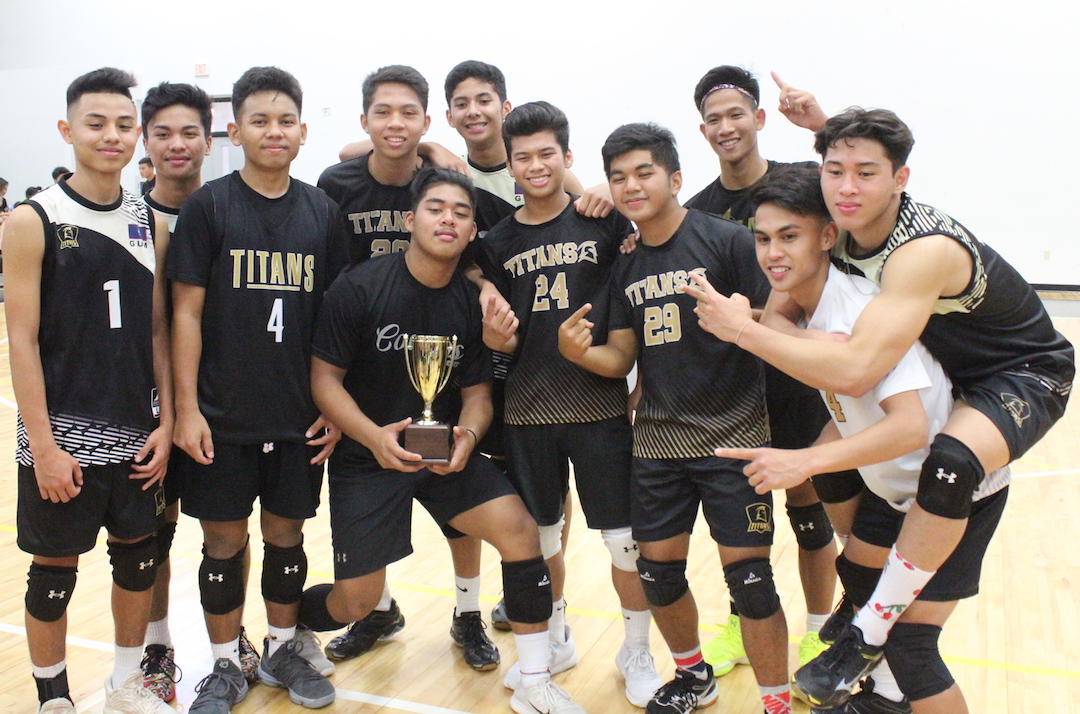 The Tiyan Titans were crowned the 2018 Boys High School Pre-season Volleyball tournament champions with a three set victory (25-21, 16-25, 15-8) over the FD Friars. Ramil Padigos led the way for the Titans with eight kills and three blocks as the Titans head into the IIAAG regular season with a ton of confidence.

“We still need to work on alot of things before the season get here but we will work on them in practice,” said Padigos. Padigos had eight kills and three blocks for the game, teammate Jude Cruz had seven kills for Tiyan and was named the tournament MVP.

“This is a good win for us but we have to be careful to not be over-confident heading into the regular season,” said Cruz. “We have to keep working hard and being humble.”

Padigos set the tone early with an emphatic six pack kill as Tiyan went ahead 4-1. Cruz provided another kill and Padigos blocked FD’s Aidan McDonald to push the lead to 10-4, forcing FD to call a timeout to regroup.

FD finally got into rhythm with Kyle Gaitan and Brandon Mendiola recording kills to cut their deficit to 15-11.

The Friars cut the deficit to two points with Mendiola recording another kill in middle to trail 21-19. The Titans answered with Padigos finding an open spot and Cruz towering over the FD blockers to take the first set 25-21.

The Friars opened the second set with a 6-2 lead. McDonald recorded two early kills to help the Friars take the early advantage. Friar setter Logan Pangelinan continued to feed the power hitters as FD extended their lead to 13-6, forcing Tiyan to call a timeout.

Tiyan’s Richard Santos recorded a kill and Padigos another block to cut their deficit to 13-8. The Friars go on an 8-2 run led by outside hitter Noah Diaz who recorded to kills to go up 21-10. The Friars survived a late comeback to hold on for the 25-16 victory to force a third set.

Tiyan goes up 5-1 behind a pair of kills from Cruz. Neil Ericsson adds to the lead with a middle kill as Tiyan storms ahead to a comfortable 8-2 lead.

The Friars comeback with De’Aundre Cruz and Gaitan leading the way with kills to trail 8-6. The Titans catch a break with a service error and both Padigos and Cruz record kills to take an 11-7 advantage. The Friars called a timeout to regroup but momentum was on Tiyan’s side as they played good defense to win the final set 15-8.

“Our coaches message going into the third set was to do better in communication. We had to fix our communication skills so we won’t mess up our play,” said Cruz.

McDonald had a game high nine kills for FD, he also recorded FD’s only service ace of the match. Gaitan had seven kills for FD.

Despite the second place finishing, the Friars are still looking forward to improving before the season starts next week.

“This tournament was very important to us because we haven’t really gotten together as a full team yet so it’s good to see what we need to work on. From this tournament, we realized we have a lot to work on. We need to step it up on our defense and communicate better as a team,” said Gaitan.

“This is a new system and we have a good group of new faces on the varsity team this year,” said Caldwell. “I’m confident we will do well this season with the new system. We got a lot of reps during this tournament and we look to improve as the season approaches,” said Caldwell.

Tiyan’s Jude Cruz gets up for a kill. (photo by Robert Balajadia)

The Tiyan Titans and FD Friars duelled for the preseason title Saturday at the Titans gym. (photo by Robert Balajadia)

Carlson Gracie Jr. is back on Guam!

Master Gracie is back this week spending time with his jiu-jitsu academy, leading up to a big promotion ceremony this weekend, according to head coach Gabe Baker.

Pangelinan battled for a bronze in the Master 3 Black Belt Heavyweight division in Dallas.