ROADRUNNERS IMPROVE TO 5-0 IN WIN OVER PIRATES

The Benavente Middle School (BMS) Roadrunners are the team to beat in the Guam Interscholastic Sports Association’s Middle School Boys Basketball League after defeating the Agueda Johnston Pirates 35-18 at the Agueda gym in Ordot. The victory helps the Roadrunners improve to 5-0 for the season, the Pirates fall to 1-4. 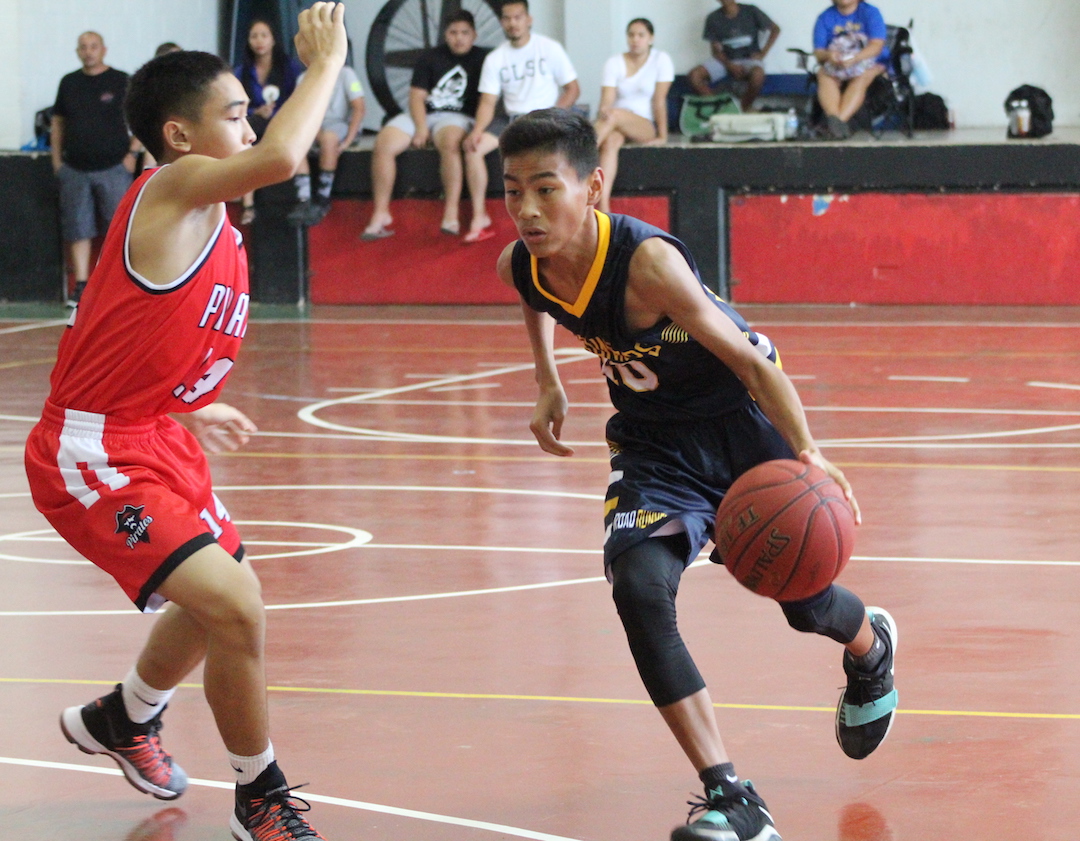 The Benavente Middle School (BMS) Roadrunners are the team to beat in the Guam Interscholastic Sports Association’s Middle School Boys Basketball League after defeating the Agueda Johnston Pirates 35-18 at the Agueda gym in Ordot. The victory helps the Roadrunners improve to 5-0 for the season, the Pirates fall to 1-4.

The Roadrunners, coached by Erwin Villa, set the tone early with their full court press to take an early double digit lead. BMS managed to get three early steals to go ahead 13-2, forcing Agueda to burn two early timeouts to adjust their press breaker.

Vorel Cruz and Hendrix De Fiesta from BMS turned defense into offense with steals and assists to help the Roadrunners take the early advantage.

“We worked hard on defense; our defense wins games for us,” said De Fiesta. De Fiesta managed a game high five steals for the contest as BMS accounted for a total of 15 steals for the game.

BMS continued to add to their lead in the second period. The Roadrunners had a comfortable 14 point lead at halftime with Cruz making a three-pointer and a lay-in before the break.

The Pirates struggled to hit open shots on their home court and scored just six points by halftime. Zeb Cepeda, Javier Cruz and Bailee Sablan each scored a basket for the Pirates in the first half as the Pirates trailed 20-6 after two quarters.

Pirates comeback in the third

Agueda goes on a 7-0 run to close out the third quarter to cut their deficit to just 10 points. The Pirates trailed 24-14 after Sablan made a three-pointer and a lay-in to keep his team within striking distance going into the final period.

Agueda’s Jonah Gumabon scored the first basket of the fourth quarter to keep momentum in favor of the Pirates. The Pirates trailed 24-16 and looked to shock the Roadrunners with the home crowd cheering them on.

The Roadrunners responded with pressure defense and went on an 11-0 run to secure the victory, preserving their unblemished record.

Jacobe Quinata started the run for BMS scoring four points in the paint and later recorded a block on defense. Elpizo Orichiro benefited from Quinata’s block and sinks a short jumper on the ensuing offensive possession for the Roadrunners. De Fiesta ended any hopes of a Pirate comeback with a 3-pointer late in the final quarter of regulation.

“We need to patch things up on defense because they did a good job at breaking our press in the second half,” said De Fiesta who had a game high 13 points.

“There’s still some things we need to work on,” said Cruz. “In the second half, they were beating us in taking the ball out of bounds; we need to get better (in denying the inbounds pass) in that area”.

Sablan led the Pirates with seven points. Gumabon had five points and four assists for Agueda.

Both teams travel down south for their next game which is scheduled for this Monday. The Pirates’ next game will be at Oceanview Middle School, the Roadrunners take on Inarajan Middle School. All games start with a B-team game at 530pm.

In the B-team game, the Roadrunners improved to 5-0 for the season with a 44-22 victory over Agueda. Nicolas Baza had 10 points, Gerald Malana chipped in nine for the Roadrunners. Geordan Quintanilla scored nine points for the Pirates who fall to 4-1.

Pirate Jaren Cruz lets loose from distance in the 1st half. (photo by Robert Balajadia)

Roadrunner Hendrix De Fiesta scores on a break away. (photo by Robert Balajadia)

Vorel Cruz sets up the offense early in the 1st quarter. (photo by Robert Balajadia)

Valor Cruz gets to the bucket on a drive through the defense. (photo by Robert Balajadia)