ISLANDERS COME UP BIG IN STATEMENT WIN OVER FRIARS

The JFK Islanders got their redemption against the FD Friars and handed them a 66-52 defeat to solidify their chances at making the IIAAG Boys Basketball League playoffs. 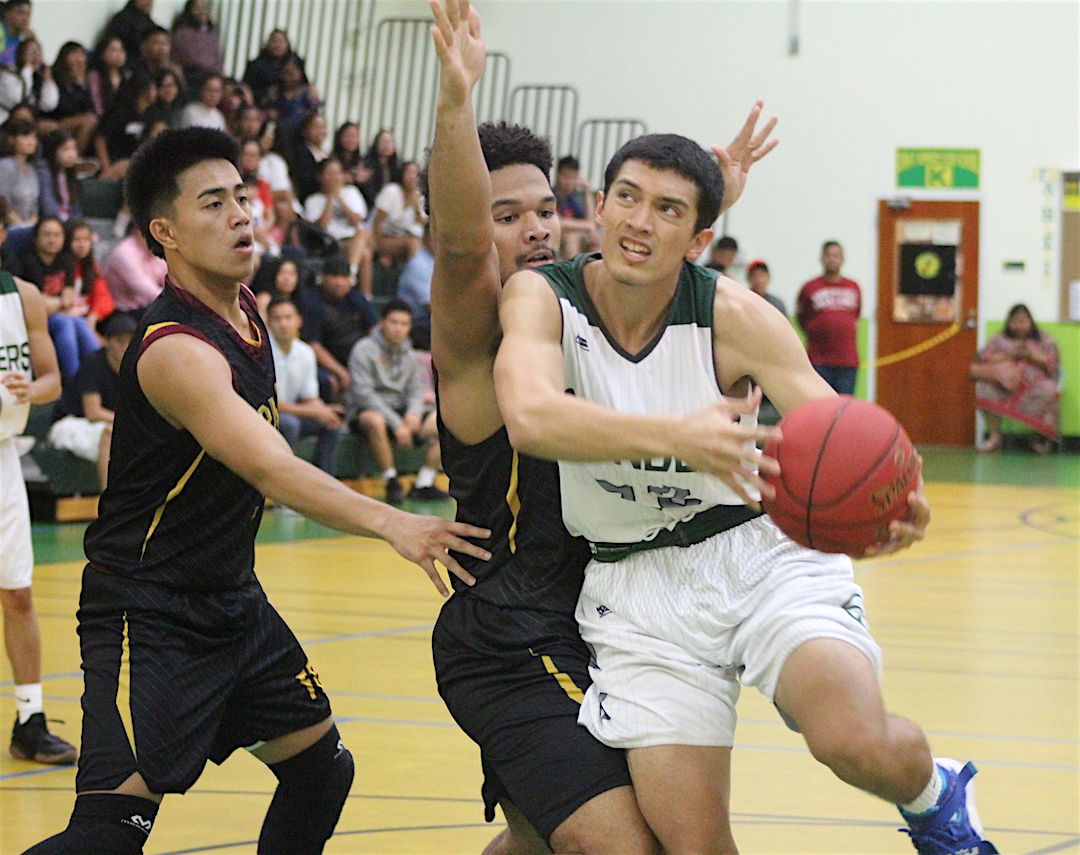 The JFK Islanders got their redemption against the FD Friars and handed them a 66-52 defeat to solidify their chances at making the IIAAG Boys Basketball League playoffs.

The JFK crowd heckled the visiting the Friars as the leagues top offensive team which averages 76 points per game managed to score just 18 points by halftime.

JFK team captain Alschea Grape led the Islanders with 22 points, six assists and five rebounds to help the Islanders improve to 8-4 for the season. The Islanders solidified their chances of making the playoffs and are third in the Taga division. The top four teams in each division (Taga and Gadao) make the playoffs.

“This was a redemption win for us. We wanted to make a statement and let everyone in the league know that we are one of the top teams,” said Grape.

The Friars defeated the Islanders in the pre-season championship game last month and Grape said his team learned from that loss and improved.

The Islanders were bullied in their first matchup and were out-rebounded in a 54-40 defeat last month. But Friday was a different story, the Islanders won the battle of the boards 47-27.

With starting center Jonah Hahn was forced to sit on the bench early with foul trouble, backup center Nathan Chochol entered the game in the first quarter and provided a much needed spark in the paint for JFK head coach Rey Serafico.

Chochol gave the Islanders second chance opportunities to quickly surge ahead 18-8. Momentum continued in the second quarter as the Islanders went ahead 26-10 with Grape and Chris Morikami scoring transition buckets.

“Our big man Nate (Chochol) as well as everyone on our team stepped up tonight,” said Grape.

FD’s Kyle Gaitan answered with a steal and the ‘and 1’ basket to stop the run but Chochol helped close the half with another basket in the paint to lead 35-18 by halftime.

Fd started the second half on an 8-2 run. Friar point guard Tomas Calvo drained a short jumper and a lay-in to start the run. Gaitan and DeAundre Cruz each scored to cap the run as FD trailed 40-28 with 5:06 remaining in the third quarter.

The Islanders ended FD’s momentum with Hahn finding Grape under the basket from a back cut to get the JFK fans cheering as the home team led 52-40 going into the final quarter.

Gaitan and Chochol traded baskets to start the final period but FD suffered a huge blow to their offense after Gaitan picked up his fifth foul of the game. FD trailed by as much as 15 points in the final period with Chochol and Grape anchoring the offense for JFK to secure the victory.

“It was a good victory for us but we still have a long way to go,” said Chochol. Chochol had 15 points and eight rebounds off the bench for JFK. Chochol made 7-9 field goals against the leagues biggest front court.

“Their guys are big but I just went out there and tried to do my best to help my team”, said Chochol.

Morikami, who also comes off the bench, scored 10 points for JFK. Hahn had just five points but grabbed 10 rebounds on just 11 minutes of playing time.

Despite fouling out, Gaitan still managed another double-double with 21 points and 11 rebounds. Calvo had nine points, Cruz had six point and six rebounds for FD. FD plays today at Harvest, JFK will have another challenging game as they visit the Sanchez Sharks. The Friars are still in first place in the Gadao division with a 9-2 record.

In the JV game, the Friars remain on the top of the standings with St Paul after defeating the Islanders 50-33. Cisco Uncangco led FD (10-1) with 12 points, Mathew Santos added 10 points for the Friars.

Friar Nathaniel Kyle Gaitan scores on a layup through the Islander defense. (photo by Robert Balajadia)

Friar Tomas Calvo gets sopped on the break. (photo by Robert Balajadia)

JFK’s Alschea Grape gets to bucket from the baseline. (photo by Robert Balajadia)

Alschea Grape floats in from the baseline for two points. (photo by Robert Balajadia)