Junior Golfers from the Guam Junior Golf League teamed up with Saipan Juniors to from “Team Marianas” who recently competed in the 2018 Philippine Airlines – Junior Golf Foundation of the Philippines Junior Inter club Tournament from April 13 -15 at The Pradera Veder Golf Course in Lubao, Pampanga Philippines. 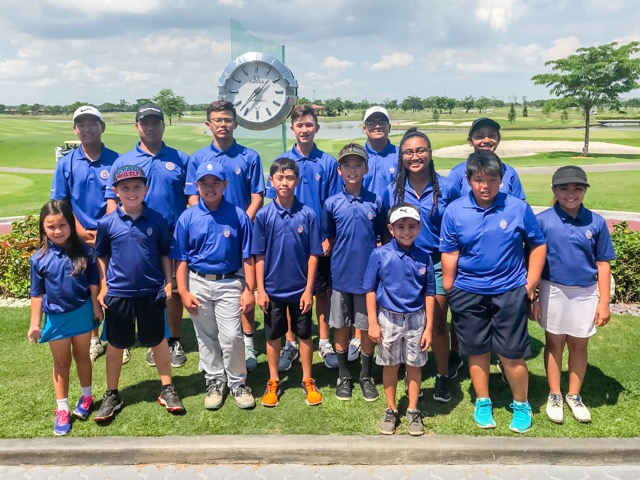 PRESS RELEASE – Junior Golfers from the Guam Junior Golf League teamed up with Saipan Juniors to from “Team Marianas” who recently competed in the 2018 Philippine Airlines – Junior Golf Foundation of the Philippines Junior Inter club Tournament from April 13 -15 at The Pradera Veder Golf Course in Lubao, Pampanga Philippines.

This is the 2nd year Junior golf hopefuls Guam participated in this event. The 2018 team was boosted with two of Saipan’s best in Edward Lee and Sebastian Camacho.

Saipan’s Edward Lee was the talk of the tournament almost stealing the highly competitive 13-14 boys Open Division. The tournament witnessed a thrilling five-hole playoff between Edward and defending champion Soo Kim Tae from the Manila Orchard. It was a back and forth display of quality golf with Edward coming short on the 5th sudden death hole.

“I enjoyed the experience” Edward said, “I hope to come back next year.”

Tyanna Jacot took the 9-10 girls open division by storm taking a commanding 9 point lead after tournament day 1 with accurate drives and touch around the very fast putting greens at Pradera Verde. Top juniors from Wack-Wack Golf Club, Manila Southwoods and host Pradera Verde were making their move but Tyanna kept it together and played steady through out to preserve her lead and win her division.

“Tyanna came back to this tournament determined to better than her 3rd place finish last year”, said Grace Jacot mother of Tyanna. “These will be the same people that she’s going to play against in the Junior World in San Diego this July. Winning in their home course is truly an accomplishment for Tyanna. Her hard work paid off.”

Team Captain Jovy Lacson said, “Every member of the team played exceptional golf. This experience will help them in their progress. Just proves that Junior golfers from this region can compete and excel in this sport. Junior Golf in Guam and Saipan is alive and well with these 15 Juniors Golfers and others who we hope to take back to next year’s PAL – JGFP Junior Inter club.”