Mika Datu leads the cheers at the University of San Francisco 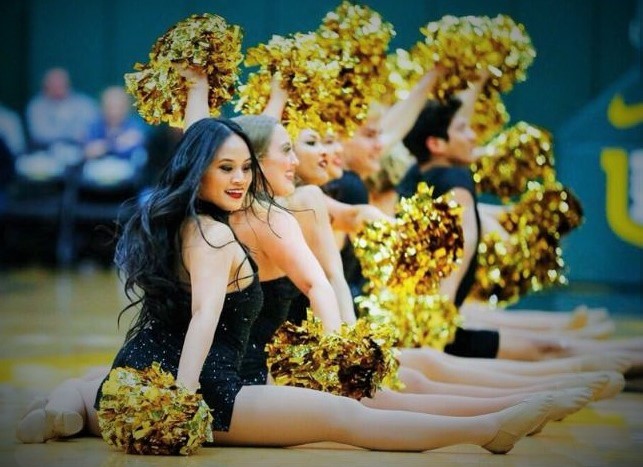 2016 JFK graduate Mika Datu is cheering it up for the Div I University of San Francisco men’s basketball team as the co-captain.

Don’t look now, but a Cinderella Story just may come out of the San Francisco Bay Area in this month’s NCAA March Madness.

The University of San Francisco Dons head to the West Coast Conference with the second best conference record.

Heading to Vegas this week for the WCC Tournament along with the team is cheerleading co-captain Mika Datu, a 2016 graduate of John F. Kennedy.

In her third year at USF, the biology major leads the Spirit Squad for the fairly unknown but highly respected Dons that play in the same conference as the top team in the nation Gonzaga. USF is ranked fourth in the conference with the second-best overall record at 21-9.

“I just really like meeting people and the games are so much fun,” said the Dededo resident who attended St. Anthony School before going to JFK.

After a brief stint in gymnastics, Mika found her love for dance in the fourth grade when she and younger sister Aleia joined a local dance group. It’s been a passion ever since.

“After my first practice, I was doing routines I had just learned,” Datu recalls. “I really enjoyed it.”

Mika Datu was class vice president and a National Honor Society student at JFK before heading to USF for college. (courtesy photo)

While at JFK, her balance between dance and Vivace  practices limited her to just a brief time on the Islanders cheerleading squad during her sophomore year. Being the class vice president and National Honor Society member added to the school responsibilities as well. It wasn’t until her first year in college where she picked up desire to be on the sidelines once again.

“She was very nervous to go to school off-island but joining the team has given her so many opportunities like travel and meeting famous people in the basketball community such as Warriors coach Steve Kerr and former head coach of the Chicago Bulls Bill Cartwright,” mom Maureen said. “She never really competed for dance but just really loved performing. She really just took a shot at it so she can get to know people and that’s basically how she started at USF.”

Mika will be applying for dental school this year and hopes to practice back on Guam in the future. (courtesy photo)

Like many college students, Datu suffered from separation anxiety (aka ‘home sickness’) during her freshman year. It was the dance team and continued encouragement from parents Gio and Maureen that help get her through the early days of post high school life off-island.

“I used to get really home sick a lot, and it made me want to go home,” Mika said. “My parents encouraged me to join the squad, to keep going and experience things in the city. They’d fly me home (during breaks). I’m grateful for that because it’s really far.”

Instead of putting pressure on her as a student, Mika said her parents have been the ever presence of encouragement. “They are more encouraging than strict. They don’t want to add to my stress.”

This year Mika will be applying for dental school with hopes of one day returning home as an orthodontist.

Her short-term goal after graduation is to stay in the area and get a chance to perform with the NBA world champion Golden State Warriors. If she makes it, she will follow in the footsteps of past Guam professional cheerleaders: Deborah Luck (Oakland Raiders), Marissa and Ione Chaco (Portland Trail Blazers), Pia Gillan (Seattle Seahawks) and Maria DeCabooter (Arizona Cardinals).

But in the meantime, Go Dons. Shock the world!

NOTES: A Don is a Spanish term for a distinguished man; Mika was high school classmates with famous sprinter Regine Tugade; her favorite subjects at JFK were Physics and AP English because of her teachers Ms. Beausoliel and Mr. Protasio; she was featured on MTV News for her entrance essay to USF about growing up on Guam; along with her sister Aleia, she has two younger brothers Kyle and Eian; Basketball greats Bill Russell, K.C. Jones and Bill Cartwright are the most famous sports alumni of USF.