The final game of the IIAAG Boys Basketball Season will be decided in a rubber match between the St. Paul Warriors and FD Friars. 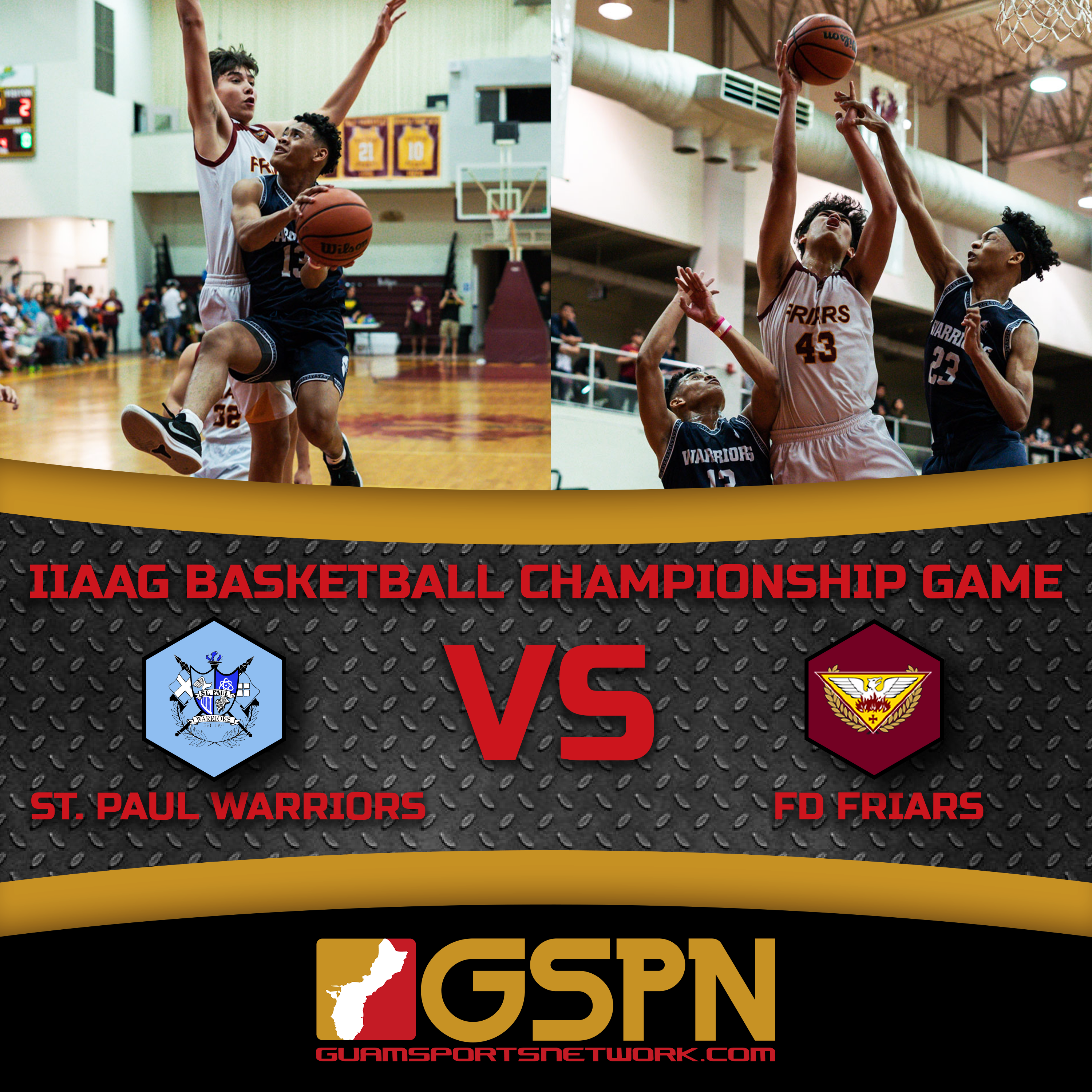 The final game of the IIAAG Boys Basketball League season will be decided in a rubber match between the St. Paul Warriors and FD Friars. Friday evening at the UOG Calvo Field House will be the third time these teams have met this year after both battled it out in the GSPN Preseason Tournament finale and in a packed house regular season meeting.

As if the championship game couldn’t be anymore hyped up, both teams split their previous meetings leaving one more game, the last game, to decide the final winner.

Tip-off is at 7 pm following the consolation game between the Okkodo Bulldogs and JFK Islanders.

Warriors Road to the Finals

The Warriors have only lost one regular season game in over three years. They won the title in 2017 against the Friars, but fell to the St. John’s Knights in 2018 after going undefeated in the regular season. St. Paul went undefeated in the GSPN Preseason Tournament, beating the Friars in a close contest. They have two losses on their record in 2019 with one coming against the Friars and one unearned after being issued a forfeit loss due to scheduling.

St. Paul skated by the Harvest Eagles in the opening round of the playoffs with an 80-40 victory after locking up the Taga Division’s top seed. They were met with stiff competition against the Bulldogs in the semis, suffering one of their lowest scoring halves all season netting just 20 points. The game turned into a defensive battle with the Warriors still coming out on top, proving they could rely on their defense even when their shots aren’t falling.

Now they enter the title game behind newly announced league MVP in senior guard Jahmar White and at least two games under their belt against the Friars. White got off to slow starts in both contests and it’s not safe to bet that he’s going to get off slow in his final game as a high school baller.

Fellow running mate Reo Aiken could be the Warriors biggest game changer with a big game from both their stars almost guaranteeing a victory for St. Paul. But don’t ignore the contributions from the shifty forward Thelo Orichiro and Audrey Dela Cruz as the two have given the Warriors a big boost in clutch moments. Coach Neo Pineda also has players on the bench ready to give him five good minutes if their number is called upon as demonstrated in the semifinals.

What the Warriors like to do in the playoffs is deploy a few new tricks, mostly on the defensive end. No team in the league wants to get into a track meet with the Warriors as they’ve yet to be beaten when playing at their fast pace. It’s going to come down to defense, as coach Pineda stated in the semifinals, as their offense is sure to follow.

The Friars were in danger of getting swept by the Taga Division’s top three teams after falling to Okkodo and JFK within a week span. Their regular season game against the Warriors was treated like a finals game given the crowd in attendance as the showdown has turned into a fan-favorite rivalry. After also being issued a forfeit due to a scheduling conflict, the Friars still finished atop the Gadao Division.

FD didn’t have an easy time in the playoffs as they were in a nail-biter against the Sanchez Sharks in the opening round. It took a strong defensive stand and clutch shots from Tony Quinene to pull out the win, but they lost defensive center Matt Fegurgur in that game after suffering a concussion. Fegurgur didn’t play in the semifinals against the Islanders, which was an even closer game. It took a game-winning shot from Brandon Soriano in overtime to beat the Islanders with the Friars getting a whole week off to rest their injured players.

However, Fegurgur, a junior, remains a game time decision for the IIAAG Championship.

FD Friars Brandon Soriano gets past the St. Paul Warriors defense for a shot at the basket. (Photo by Michael Blas)

The Friars have the biggest team in the league and they play to those strengths. Fegurgur has been a defensive stalwart all season and the team feeds off of his abilities to make plays on the defensive end. Even if Fegurgur is reduced to a limited role, having him on the floor changes the dynamic of how teams can attack the Friars.

The team is lead by senior leader Tony Quinene, who’s flourishing as the teams leading scorer in his final year. FD has a roster of interchangeable pieces with players like Soriano and junior guard Christian Taitano capable of filling up the scoreboard any given night.

The pace of the game, and breaking the Warriors press, is going to be vital for FD as head coach Eddie Pelkey has repeatedly stated they have no interest in running with a team like St. Paul. Slow and strong is how the Friars attacked the Warriors this season and it’s going to be hard to argue that they go away from that tactic given their most recent results.