The FD Friars concluded a homecoming filled weekend of football with a victory over the Southern Dolphins. 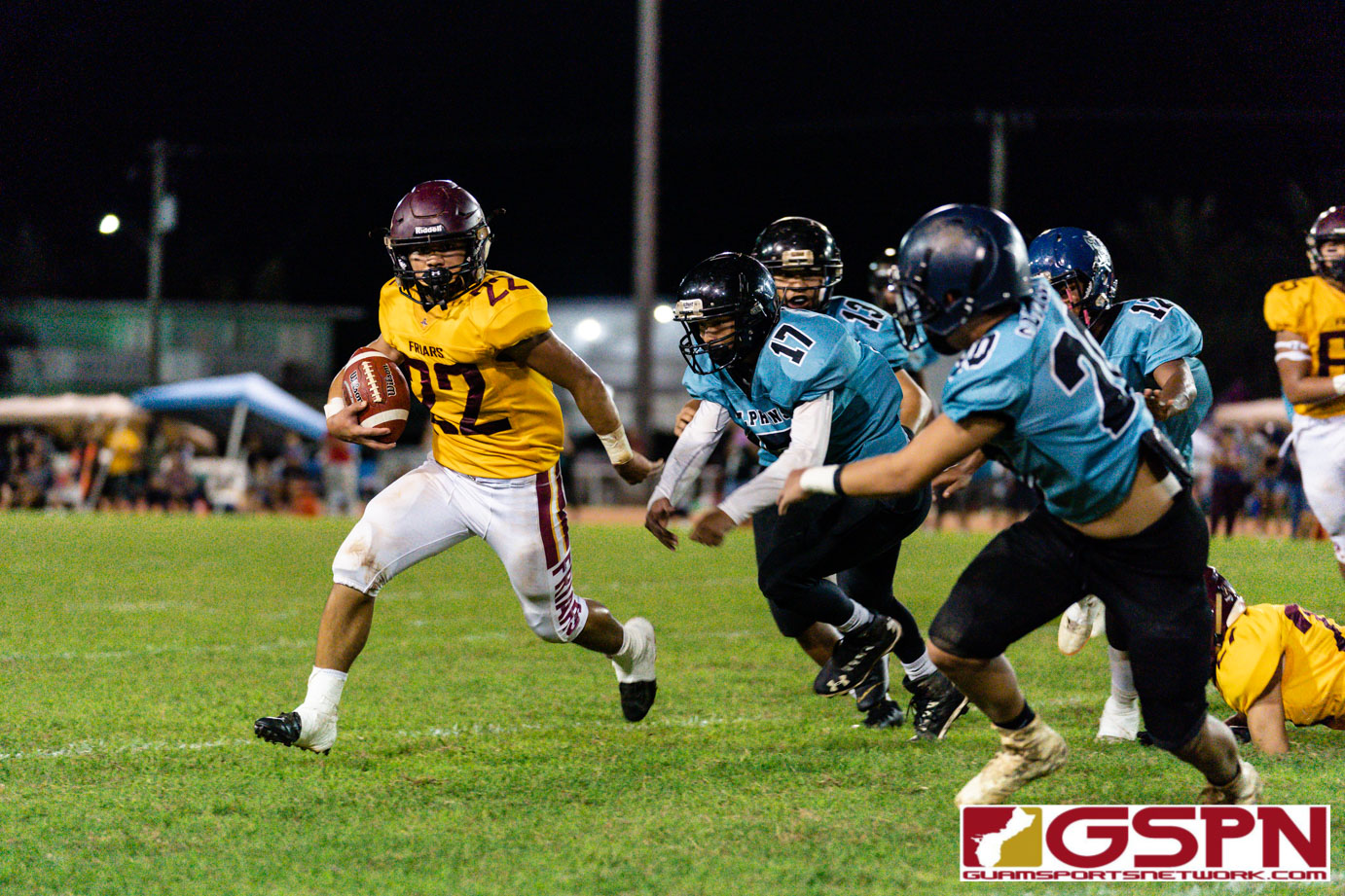 The FD Friars struck fast and efficiently against the visiting Southern Dolphins Saturday evening, finding the end zone six times en-route to a 43-0 victory on homecoming night at the GW Field. Coming off a BYE last weekend due to Okkodo forfeiting their season, the Friars extend their winning streak to 45 games.

Running back Kein ‘Ghost’ Artero only needed six touches to total 109 yards rushing and two touchdowns, but also totaled 111 yards on punt returns for a 220 all-purpose evening. Friars Quarterback Nick Anderson was a perfect 7-of-7 for 66 yards and two touchdown passes. Artero also had a 90 and 55 yard punt return touchdown called back for holding, which would have been a career night on special teams for the reigning MVP.

The Friar offense looked smooth thanks in large part to the big and bulky offensive line. Anderson wasn’t hit all night and the running game had just one of their 19 carries go for negative yardage. Offensive lineman Elijah ‘Duck’ Dudkiewicz spoke on behalf of the linemen’s ability, durability and doing the dirty work while getting none of the limelight.

“Every o-line will know that we never get recognition, but if our offense is scoring then we look good and as long as our coach knows we’re doing good then that’s all we care about. We’re the dirty workers! It’s 80% mental and 20% physical and it’s all about being able to adjust under pressure,” said Elijah.

Dolphin Lawrence Aflague had a big night on defense leading all tacklers with nine on the night. FD’s Roy Chargualaf had a team high eight tackles.

The Friars opened up the game with a 65-yard kickoff return from Javian Cruz, who got stopped by the last defender to prevent a kick-off touchdown. Cruz would eventually get into the end zone two plays later as Anderson tossed a fade route to the wideout from four yards for the games first score.

After forcing a punt, the Friars marched down the field from their own 40 with Artero finishing the drive on a 15-yard touchdown to go up 14-0. FD would come knocking at another touchdown, but a fumble at the goal line from fullback Michael Castro made for their only turnover on the night.

On the following series, FD’s Caleb Murphy would pin down Southern’s Cerilo Reyes in the end zone for a safety to make the score 16-0 through one quarter.

Artero took his final carry of the game for a 40-yard score, phasing through four different Dolphins to push the score to 23-0 early in the 2nd. FD added another touchdown before halftime as Anderson hit receiver Matt Santos for a 7-yard slant for a 30-0 score.

Kein would score on a 55-yard punt return in the 3rd and running back William Ludwig would punch in the final score on a one-yard touchdown run in the 4th.

The Friars will end their regular season against the Tiyan Titans while the Dolphins will face off against the Guam High Panthers on Saturday before the start of the post season!