GECKOS GRIND OUT WIN OVER TIYAN

With key players on their offense injured, GW got a strong performance from their defense in the win over Tiyan. 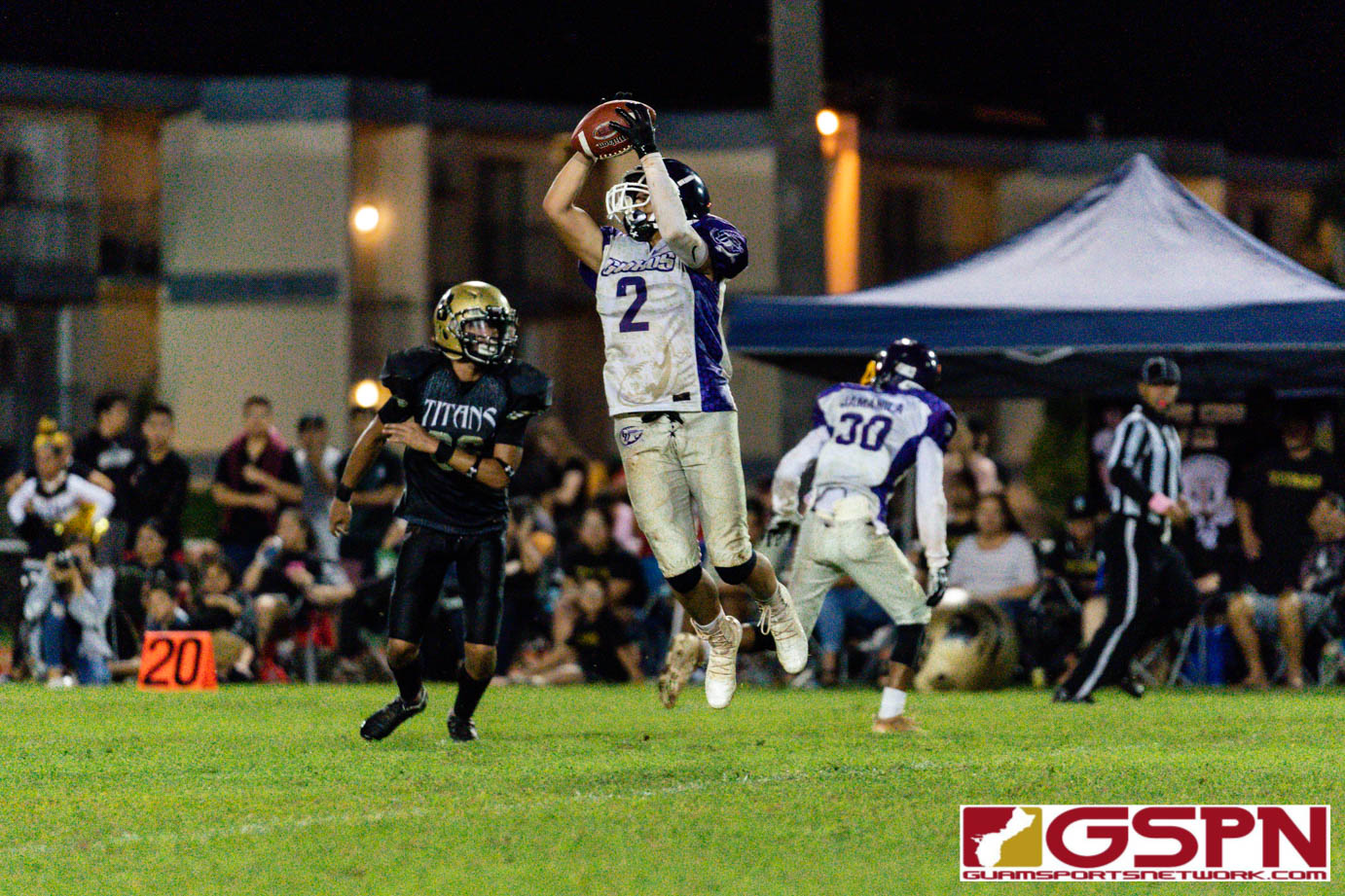 After an opening-season loss to the FD Friars, the GW Geckos have righted the course with their fourth straight win.

The Geckos improved to 4-1 in the IIAAG Football League after holding the Tiyan Titans scoreless for the 13-0 victory. The Gecko defense recorded three safeties and an interception to hold the Titans out of the red zone for the entire game.

GW’s Noah Quichocho and William Rios continued to pad their stats with their overwhelming pass rush defense, preventing the Titans from gaining any momentum.

“We complement each other; it goes hand in hand,” said Quichocho. The Tiyan offensive line had their hands full with Rios on the line and Quichocho pass rushing right behind him at linebacker.

“Whatever he doesn’t get, I’m there to clean it up,” said Quichocho who led the Geckos with seven tackles.

The Geckos suffered a huge loss in the opening kickoff with star running back Eian Naputi forced to sit out the game with an apparent ankle injury.

“The defense really felt that we all had to step up when we saw a key factor to our offense go down,” said Quichocho.

With their top running back on the sidelines, the Geckos went to the air and quarterback Ricky Macias found Brendyn Cruz for a one-handed Odell Beckham-like snatch for 32 yards.

Macias later found senior receiver Gabriel Gilbert for a 6-yard touchdown to go up 7-0 in the first quarter. The touchdown by Gilbert would be the last offensive score for the rest of the game.

Both defenses played well. One would ask: If the GW offense failed to score for the rest of the game, how does the score end 13-0? Well, the remaining six points did not come from two goals; it came from three safeties.

The Geckos recorded two safeties in the first half with Quichocho, Jim Banez, and Christopher Eclavea teaming up for the two-point scores.

The Titans also did work on defense with Jaython Pangelinan recovering a fumble to give possession back to Tiyan in the second quarter. The Titans forced another turnover with Davin Mojica recording an interception deep in their red zone to prevent a Gecko touchdown just before halftime.

The Geckos held an 11-0 lead after halftime and the offense moved the chains, threatening to put more points on the board at the Tiyan one-yard line. The Geckos attempted to punch the ball in but fail on their final attempt with Jayton James making a huge tackle to prevent a Gecko score.

The Titans took over on their own one-yard line, but Rios was there and recorded the third GW safety with a sack to go ahead 13-0.

The Geckos took over on the ensuing possession and were stopped by the Tiyan defense with Gavin Quitugua recording a sack. The Titan’s forced a turnover on third down with Mojica snatching his second interception of the game.

Leon Guerrero reviewed all his options and find Christopher Cowart for a 29-yard gain. Leon Guerrero scrambled for 15-yards later in the drive to enter Gecko territory. The Titans looked to continue momentum, but constant pressure by the blitzing Gecko defense forces them to punt on fourth and long.

“(Mojica) is very quick so I just had to anticipate his moves,” said Indalecio. Indalecio said the Geckos have a big game next week against the Sanchez Sharks and the defense needs to continue to play well. “I’m expecting our defense to prepare for a team that likes to run the ball.”

The Gecko offense was led by Cruz who had 50 receiving yards. Aiden Gumataotao and Aidan Aguon shared the workload on the ground for 45 and 40 rushing yards, respectively, for the Geckos. Macias had 37 passing yards and a PAT.

Rios followed a big performance last week with another big statistical game with four sacks which included a safety. Quichocho led the Geckos with seven tackles, two sacks and a safety. Keanu Salas had an interception and a potential pick-6 but the touchdown was called back for an illegal block on the return.

Leon Guerrero had three pass completions for 52 total yards, he also led the team in rushing with 32 yards. Cowart had two receptions for 41 yards.

Despite being limited on offense, Mojica had a good day on defense with two interceptions.  Pangelinan led the Titans with eight tackles and a fumble recovery, Ryan Johnson contributed six tackles.

The Geckos will face the Sharks next week in a battle for a potential second seed. The Sharks defeated the Islanders in the other Friday night game and are currently 3-2, the Geckos improve to 4-1. The Guam High Panthers are also in the mix for a second seed with a 3-2 record.

The Titans fall to 1-4 and remain in sixth place. The Titans will play the FD Friars next week.