The Friars went down by two scores in an instant, but ran off 47 unanswered points to completely flip the script against the Guam High Panthers. 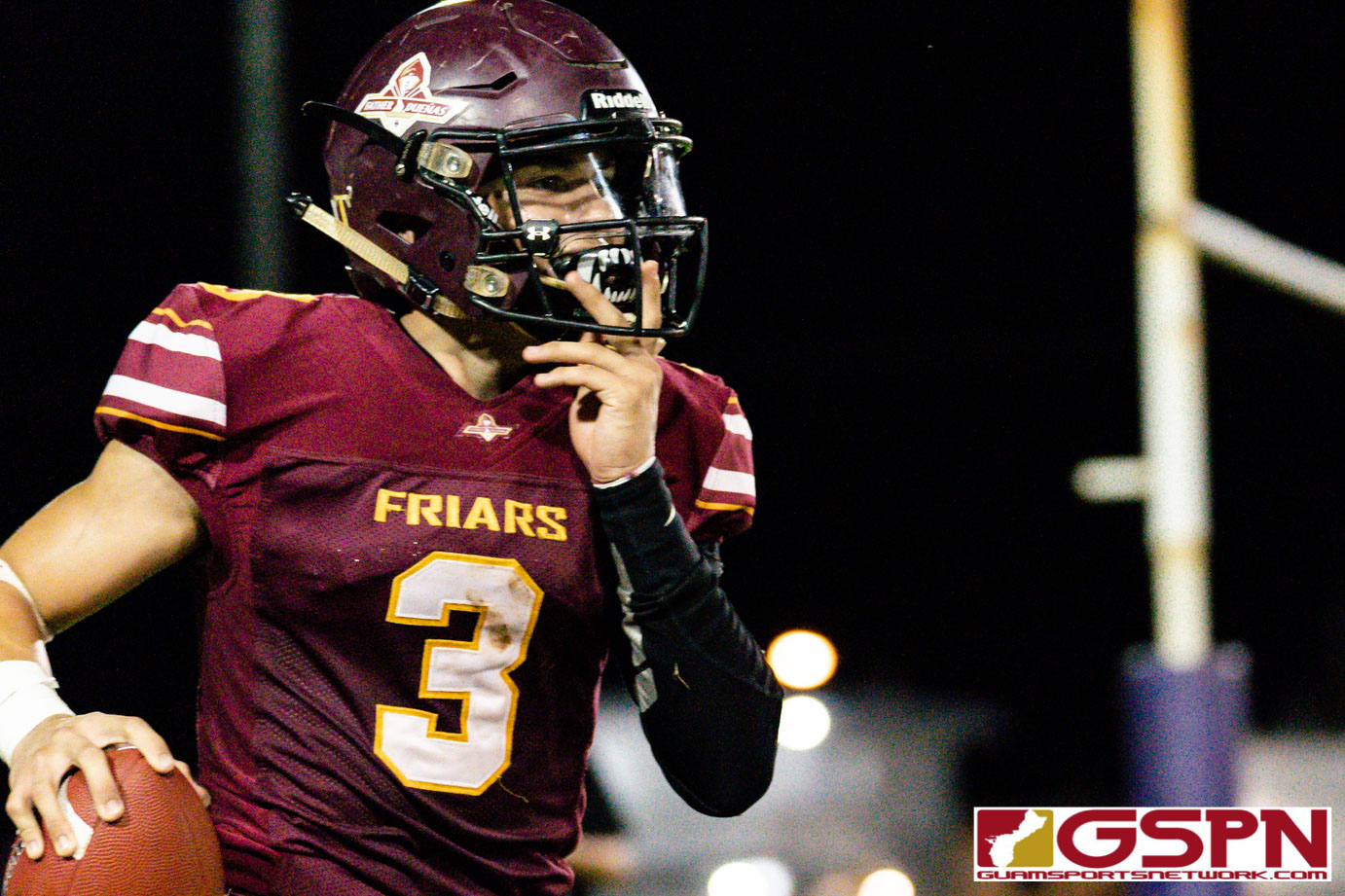 The defending IIAAG champion FD  Friars were tested early, but survived an onslaught and defeated the Guam High Panthers 47-14 at the GW Field Friday evening.

The Panthers came out swinging and scored two quick touchdowns, but the Friars countered with 47 straight points with running back Kein “Ghost” Artero rushing for 244 yards on 17 carries with four touchdowns to help the Friars improve to 2-0.

The Friars had their backs against the ropes and Friar Nation had a look of concern on their faces in the opening five minutes of the game. The Friars were rocked early with two touchdowns by Jalen Thach in the first quarter. Both touchdown passes (45 and a 24-yard TD reception) were thrown by quarterback Travon Jacobs as the Panthers looked to make a statement at the GW Field.

The Panthers looked like they were in cruise control after recovering a fumble in the first quarter off a punt after scoring two touchdowns. The Friars defense stepped up and got the ball back with good field position and handed the ball to Kein Artero.

Artero looked possesssed and took the ball in for a 54-yard score on just his second carry of the night to trim the lead 14-7. Kekoa Gamboa from FD got possession back on special teams after recovering a fumble on the ensuing kickoff to give possession back to the offense inside the red zone. Artero took advantage of the good field position and scored on second down to tie the game at 14-14 with a extra point kick from Bobby Haddock.

Gamboa continued to do wonders on special teams and recovered another bobbled fumble by the Panthers.

“I was trying to move fast and do what we do just like in practice,” said Gamboa. “We are just going to continue working hard and giving 110 percent for the rest of the season.”

The Friars looked for another quick score but an interception by Thach ended the Friar drive. The Friar defense, anchored by Caleb Murphy and Evan Brown, stopped the Panther drive.

Artero continued to move the chains and set up a goal line score from Caiyle Gogue to put the Friars up 20-14. Artero added another touchdown score after a defensive stop to make it 26-14 in the second quarter. FD Quarterback Nicholas Anderson scored before halftime on a quarterback scamper set up by a 20-yard fake punt run from Matt Santos to put FD ahead 33-14 by the break.

The Friars did not look back after leading 33-14 at halftime and Artero added another insurance touchdown with a 29-yard score.
William Ludwig from FD recorded his first touchdown in the fourth quarter to end the game at 47-14.

Jacobs had a great start in the first half but was unable to add more to his stats finishing with five completions and 93 yards. Thach had four receptions for 90 total yards on offense and an interception on defense. Nick Keefe recorded a team high five tackles for the Panthers. The Panthers drop to 1-1 for the season. They will face GW next week Friday at GW.

Gamboa had two fumble recoveries and an interception for the Friars. Murphy recorded a sack and five tackles for the Friar defense.

“One thing we learned today was that we need to keep our composure,” said Anderson. “You can hit and knocked down but you need to get back up and fix your mistakes to get better.”

“We made some mistakes early and we are going to work on them on Monday,” said Artero. “We need to be more prepared for the rest of our games and the way we are going to do that is keep working hard in practice.”

The Friars will face JFK next week in another early season showdown.