The Sanchez Sharks surrendered a 19-point lead and even found themselves trailing in the final moments of regulation at home against the GW Geckos. But heroics from freshman John Macaldo and poise down the stretch allowed the Sharks to force overtime where they would prevail 75-69. 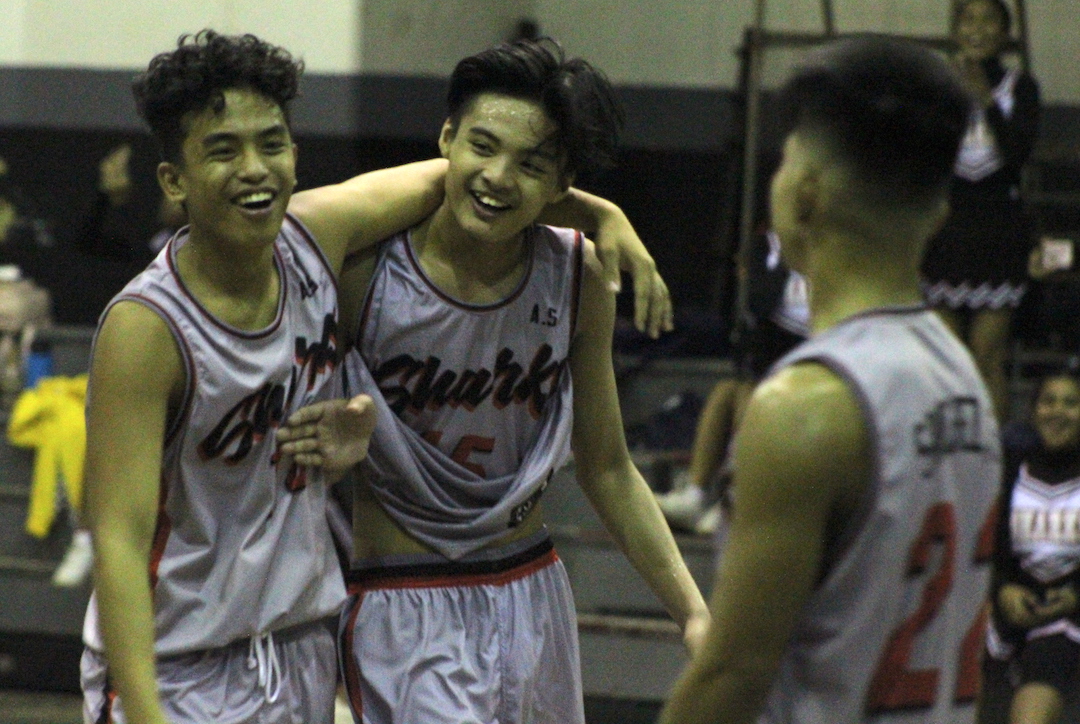 The Sanchez Sharks surrendered a 19-point lead and even found themselves trailing in the final moments of regulation at home against the GW Geckos. But heroics from freshman John Macaldo and poise down the stretch allowed the Sharks to force overtime where they would prevail 75-69.

Macaldo picked up the slack for the Sharks scoring 23 points including the late bucket to send the game into overtime. In the OT, Macaldo would score four points including free throws to ice the game, closing the door on the upstart Geckos thrilling comeback.

“I was nervous the whole time but my teammates needed help so I had to step up. We listened to our coach and we made every play count,” said Macaldo on his big night.

Both teams were without their starting point guards with Shark Isaiah Malig out with the flu and an injured leg as well as Gecko Shelby Meeks, who also missed Tuesday’s contest with the flu. It was apparent early GW was missing their primary ball handler as the Geckos struggled with turnovers that allowed the Sharks to jump out to a 41-23 halftime lead.

The Geckos responded by turning up the defense, pressuring the Sharks ball handlers with a half court press that ignited two separate 8-0 runs in the 3rd quarter to get within 53-45 as Gecko Eian Naputi poured in six points off the bench.

The Sanchez lead was staying afloat thanks to a steady serving of Harold Gaerlan, the senior big-man who scored 14 of his 19 in the second half.

“We made the right plays on defense when we needed stops and when it came down to offense we had to play our ball and control the game. Coach [Arvin] told us to reset our minds after giving up our lead and he stressed getting back and playing good defense,” said Gaerlan.

GW stormed back in the 4th when guard Dylan Trusso nailed a deep three to get within 55-52 at the quarters five-minute mark. Trusso would later push the ball up the floor off a Sanchez turnover for to hit Brendyn Cruz for a layup to get within 61-60, only to take the lead a play later as Cruz would be the beneficiary of a beautiful bounce pass from Josh Sebastian to give GW their first lead since the opening three minutes: 62-61.

The Geckos would take their biggest lead off a free throw from Ricky Macias to go up 66-62, but Gaerlan would prove much in the clutch after grabbing a missed shot for a put-back bucket to get within 66-64 with a minute left in regulation.

Macaldo would make the Geckos pay on turnover as the freshman got loose on the left wing as he glided for a left-handed finger roll to tie the game at 66 with 13 seconds left. GW would turn the ball over on the inbound to give the Sharks a chance at the final possession. Shark Joshua Celeste would miss the go-ahead jumper in the lane throwing the game into overtime.

Gaerlan would knock in the OT’s first bucket, but went down with cramps on the next defensive possession and would not return. But the senior’s faith in his teammates never wavered as he watched the remainder on the bench.

“I wasn’t too nervous because I see how hard these guys work in practice. I trust everyone of these guys,” added Gaerlan.

GW would struggled getting a basket as the would convert just 3-of-4 free throws with no made field goals. Erjan Sanchez would make a big play on the defensive end for the Sharks, giving up his body while diving out of bounds to save a loose ball of a Gecko which led to free throws for the Sharks to ice the game 75-69.