JFK Islander running back Jacobe Quinata scored the games only touchdown in a win over the visiting Southern Dolphins. 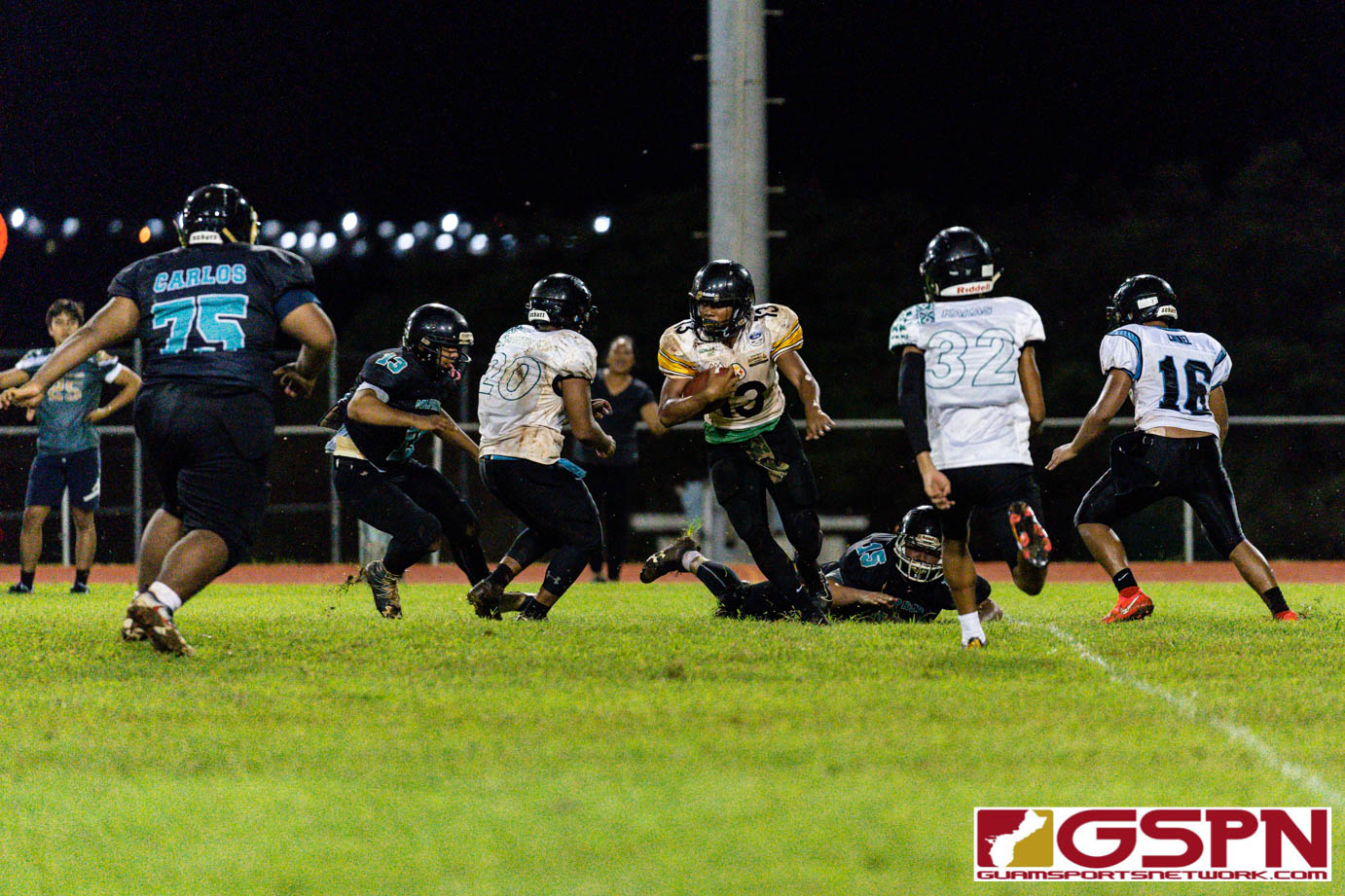 Opening weekend in IIAAG football continued through Saturday evening featuring a close contest between the home team JFK Islanders and Southern Dolphins. It wasn’t pretty, but the Islanders were able to lean on sophomore running back Jacobe Quinata to hang on to a 7-0 win.

No one had a busier night than Quinata as he played both sides of the ball as a running back and linebacker from kick-off to the final quarter. His work in the backfield would lead to the games only score and his tackling in the box would aide in keeping Southern off the board.

“I’m exhausted honestly,” said Jacobe on his busy night. “When it comes to the game I’ve got to put everything I’ve got into it and more.”

Neither team was able to get anything going in the first half which led to a scoreless halftime. Quinata managed to spark some life into the Islander offense in the 3rd quarter off a big 56-yard run to get them into the red zone, at the Southern 13, for the first time all game.

On 4th-and-goal from the Dolphin’s two, Quinata lowered his shoulders to get into the end zone to cap off an 71-yard drive. Kicker Juan Sarmiento would make good on the PAT for the 7-0 lead.

“We just talked about what we could do better. We fired up our offensive line and told them to push for a couple more yards and give us more time and it was really their play that did it for us,” stated Quinata on the team looking better in the second half.

JFK threatened to score once more late in the 4th after quarterback Allen Blend connected with receiver Kyler Aguon for 24 yards to get to the Dolphin’s five-yard line. An injury suffered by Dolphin’s Lawrence Aflague a play later, that would require stretcher assistance off the field, would be enough for the refs to officially call the game with less than two minutes remaining.

Southern’s closest attempt at scoring came in the 2nd quarter after defensive back Isaac Jesus picked off Islander’s Blend at the JFK 35 yard line as Blend tossed it up for receiver Nico Velez in triple coverage.

The Dolphins got big runs from quarterback Ethaniel Escuadra and Cerilo Reyes to get within 4th and goal from the six. Opting to go for the down instead of attempt a field goal wouldn’t play out well for the Dolphins as Escuadra would get stuffed on 4th for a turnover on downs.

A kick-off win is hard not to be excited about, though JFK isn’t going to take much away from Saturday evening’s performance.

“A win is a win, but we’re going to work harder on Monday and get ready for the next game,” added Jacobe.

The JFK Islanders play host to the Tiyan Titans next weekend while Southern will host the Sanchez Sharks for the first morning game of the season.