The battle of unbeaten’s in the season finale went to the Islanders, knocking off the Royals in straight sets. 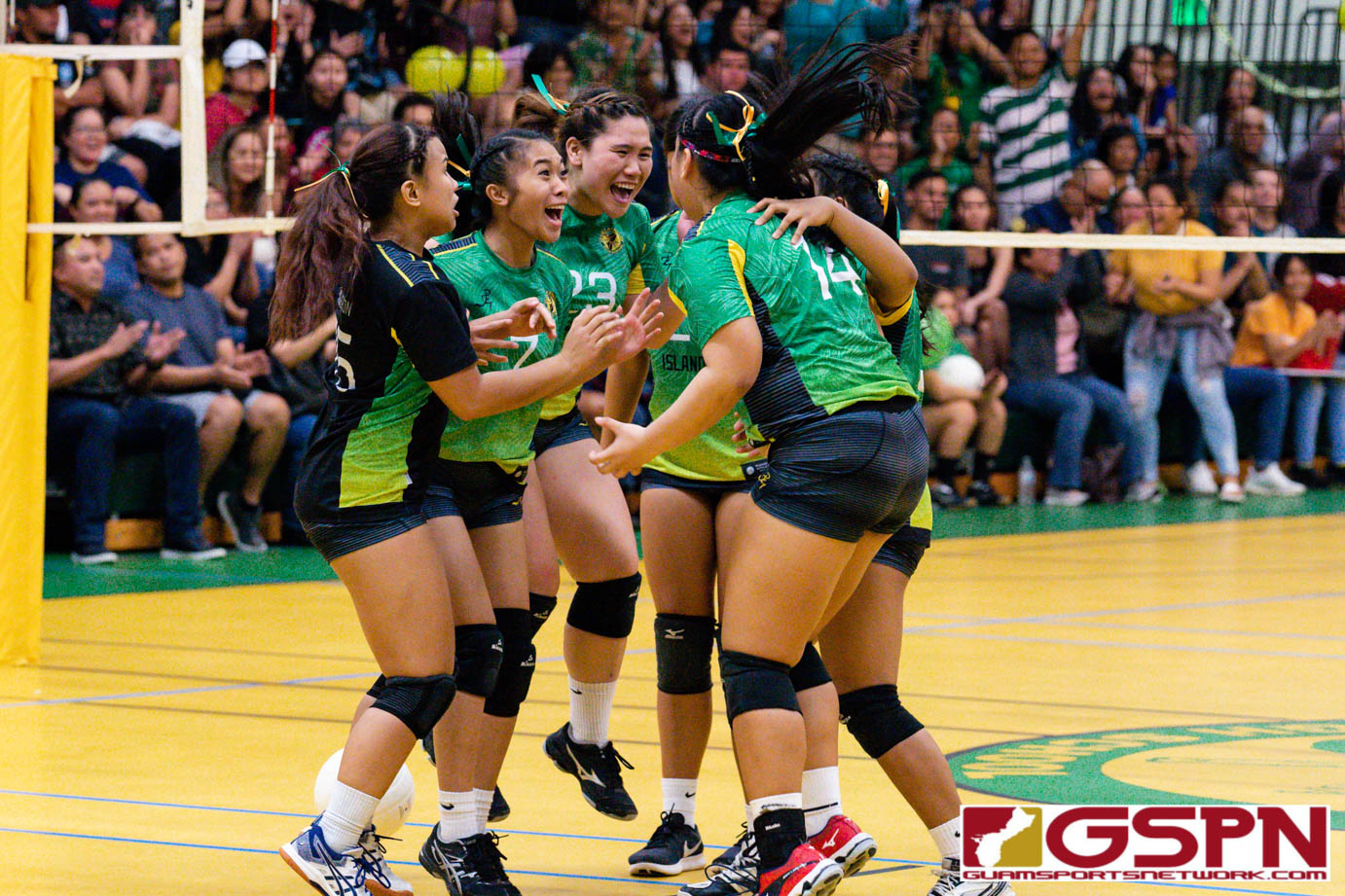 The final games of the IIAAG Girls Volleyball regular season had to be pushed back from Tuesday to Friday, but the minor change in schedule didn’t kill the hype for the first meeting between the two unbeaten JFK Islanders and ND Royals.

A packed house on senior night made for a loud JFK gym as the home crowd roared all evening with the Islanders defeating the Royals in straight sets 25-19, 25-19, 25-23.

JFK was led in offense by outside hitter Frencine Villena with 10 total kills. Villena took over in the final set where she would score seven of the Islanders nine total kills in the set alone. Teammate Kiana Rivera would finish with six kills.

“We were very inspired tonight because it was our senior night. We gave it our hearts, because this is the sport we love,” said Villena.

The Islander defense held the very dangerous Austia Mendiola in check with libero Maiya Taijeron digging up a wealth of Mendiola’s spikes that normally wouldn’t find its way back.

“I was really watching her body language and really just reacted to the ball,” said Taijeron on strategically facing Mendiola. “I really just went for it and I try to encourage myself to try and get every ball.”

The crowd was loud from the opening serve and didn’t die down until the post game handshakes. Even though the noise made it hard to even think at times, JFK did their best to tune everything out.

“We just encouraged each other to stay focused. The noise meant nothing to us and the only thing that mattered was who was on the floor. We really wanted this and fought so hard for what we wanted,” said Taijeron on the loud crowd.

JFK has now locked up home-court advantage for majority of the playoffs where they have proven to be an even tougher team. For them, grabbing the top spot and the chance to play in front of their home crowd at least twice more was an important reason to come out victorious Friday.

“It was very important. It’s definitely an advantage since we know what areas to attack, how to strategize and where to hit on the court,” said Villena.

The Islanders opened the game on a 5-0 run behind the serving of Kyoni Yamaguchi. The Royals would battle back with Mendiola notching an ace to tie the game at 10 before taking their first lead off a cross-court kill from Minami Rabago. JFK would take the lead back 13-12 on an ND error and started to pull away with Rivera locking in a pair of kills for a 19-14 advantage. An ND error would give JFK the opening set 25-19.

JFK jumped out to an early lead once again thanks to back-to-back kills from Yamaguchi, forcing an ND timeout with the home team up 11-5. ND would once again rally back after a multitude of errors with Mendiola getting a big block up the middle for a 16-all game. The Royals piled on more errors with three straight putting them down 22-18. A long rally would ensue that ended in a Rivera kill 23-19 before the set would end on Royals hitting error.

The final set belonged to Villena despite trailing 9-4 early. Villena would lock in her third kill as part of a 5-0 run to tie the game at nine-all. Villena would then get her fifth kill for a 14 all game before Yamaguchi would give her team the lead a kill later. Down 21-20, ND would get a pair of aces from Michala Connelley to take the lead for a moment 22-21. An error would give the ball back to JFK where Rivera would answer with an ace of her own for a 23-22 lead with the game ending on an ND hitting error.

Opening round of the playoffs begin next Tuesday with the top eight teams going at it.