The JFK Islanders defended their home court Friday night with a thrilling 52-49 victory over the Okkodo Bulldogs. After several changes and star players fouling out one-by-one in the fourth quarter, King Karl De Mesa iced the game at the free throw line with 17 seconds remaining. 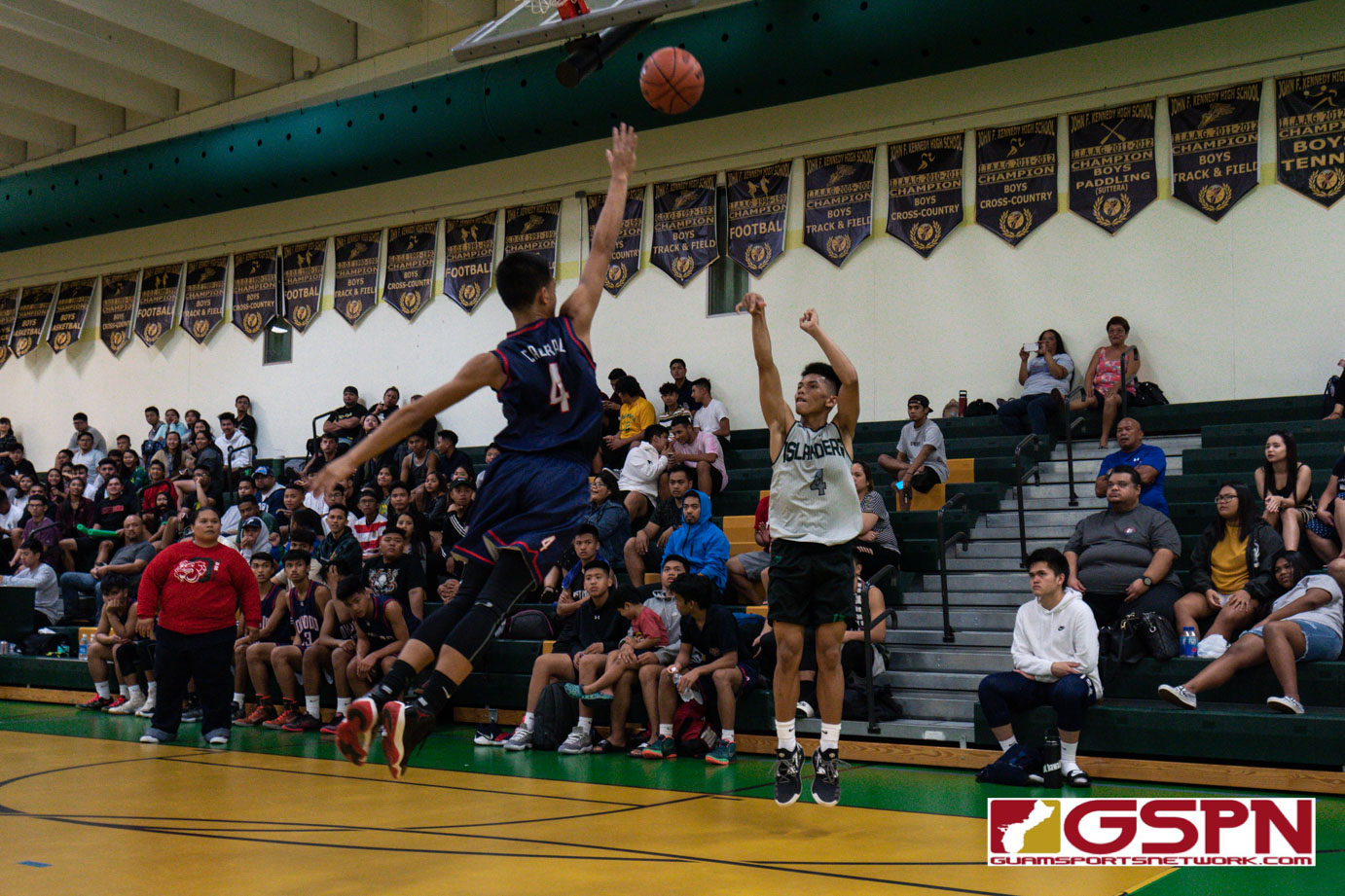 The JFK Islanders defended their home court Friday night with a thrilling 52-49 victory over the Okkodo Bulldogs. After several changes and star players fouling out one-by-one in the fourth quarter, King Karl De Mesa iced the game at the free throw line with 17 seconds remaining.

Wendy’s Player of the Game: JFK Islanders Karl De Mesa came up clutch in the closing seconds of the game, knocking in his free throws to gain the lead over the Okkodo Bulldogs. (Photo by Michael Blas)

JFK’S leading scorer and point guard Jerry Ngiraremiang fouled out in the opening moments of the fourth quarter and the Islanders needed someone to step up badly. De Mesa stood up to the challenge and guided the Islanders to victory to remain undefeated (2-0) in the IIAAG Boys Basketball League. The Bulldogs fall to (1-1).

It was a seesaw battle to start the contest with each team struggling to score a basket. Okkodo’s Kevin Cabral started a run and recorded back-to-back buckets off steals to help Okkodo take an early 6-4 advantage.

Ngiraremiang had a big second quarter with two 3-pointers to help the Islanders gain some momentum with a 25-20 lead by halftime.

Cabral scored six quick points after the break to tie the game at 28-28. Nick Panganiban later gave the Bulldogs the lead with a left-handed floater to go ahead 32-30. Ngiraremiang recorded his fourth foul early in the third period and was forced to watch from the bench as JFK relinquished their lead.

A thrilling sequence occured to end the 3rd quarter in the final minute with JFK sharpshooter Jeremiah Kintoki nailing a step back 3-pointer to take a 36-35 lead. Panganiban scored off an offensive board to give the Bulldogs the advantage.

De Mesa drove to the basket in the final seconds before the end of the third period but missed the lay-up. Jan Michael Lorena rebounded, but De Mesa didn’t give up on the play and stole the ball. He made a quick lay-in all under the basket to take a 38-37 heading into the final period.

Ngiraremiang and Okkodo’s Prince Enriquez both fouled out at the beginning of the final period. Both teams went on short runs but neither is able to pull away as the score is tied with 90 seconds remaining.

Okkodo center Lino Arizanga gives his team the lead via a tip-in off and offensive rebound with 56 seconds left in regulation to go ahead 49-47. Chris Morikami from JFK got fouled driving to the basket and made one-of-two free throws with 25 seconds left.

The Bulldogs called timeout and look to burn the clock, but a costly turnover due to miscommunication hands possession back to JFK.

JFK head coach Rey Serafico called a timeout with 17 seconds left and drew up a play. The Islanders moved the ball and De Mesa drove to the basket and got fouled. De Mesa confidently made both free throws to put JFK ahead 50-49.

The Bulldogs had a chance to win the game, but missed a wide open opportunity shot for the lead. The Bulldogs are forced to foul with 0.8 seconds left and JFK’s Ralf Manalac added two insurance free throws to win the game with a final score of 52-49.

“After Jerry fouled out we really didn’t have anyone to handle the basketball except for myself. We all knew we had to step up and play more aggressive,” said an ecstatic De Mesa after the game.

The Islanders will have no time to celebrate and will have to prepare for the St Paul Warriors tonight at JFK. The Warriors won the GSPN pre-season tournament and are one of the top teams in the league with star players Jahmar White and Reo Aiken leading the team.

“We need to play good defense against them because they are a very strong team.”

De Mesa said he hopes his team will make the most of home court advantage Saturday nights showdown.

“We play the game for them (fans) and we look to find strength with their cheers,” said De Mesa.

Okkodo will look to stay above .500 as they face the Sanchez Sharks in Yigo Saturday night. Cabral led the Bulldogs with 16 points and three steals, Lorena recorded a double-double with 13 points and 10 rebounds.

Ngiraremiang led the Islanders in scoring with 14 points despite the foul trouble. De Mesa had 13 points and three steals, Morikami scored 10 points. There were 47 total fouls for the contest.