The Angels closed out the final game of Matua Division with a victory over the short-handed Raiders. 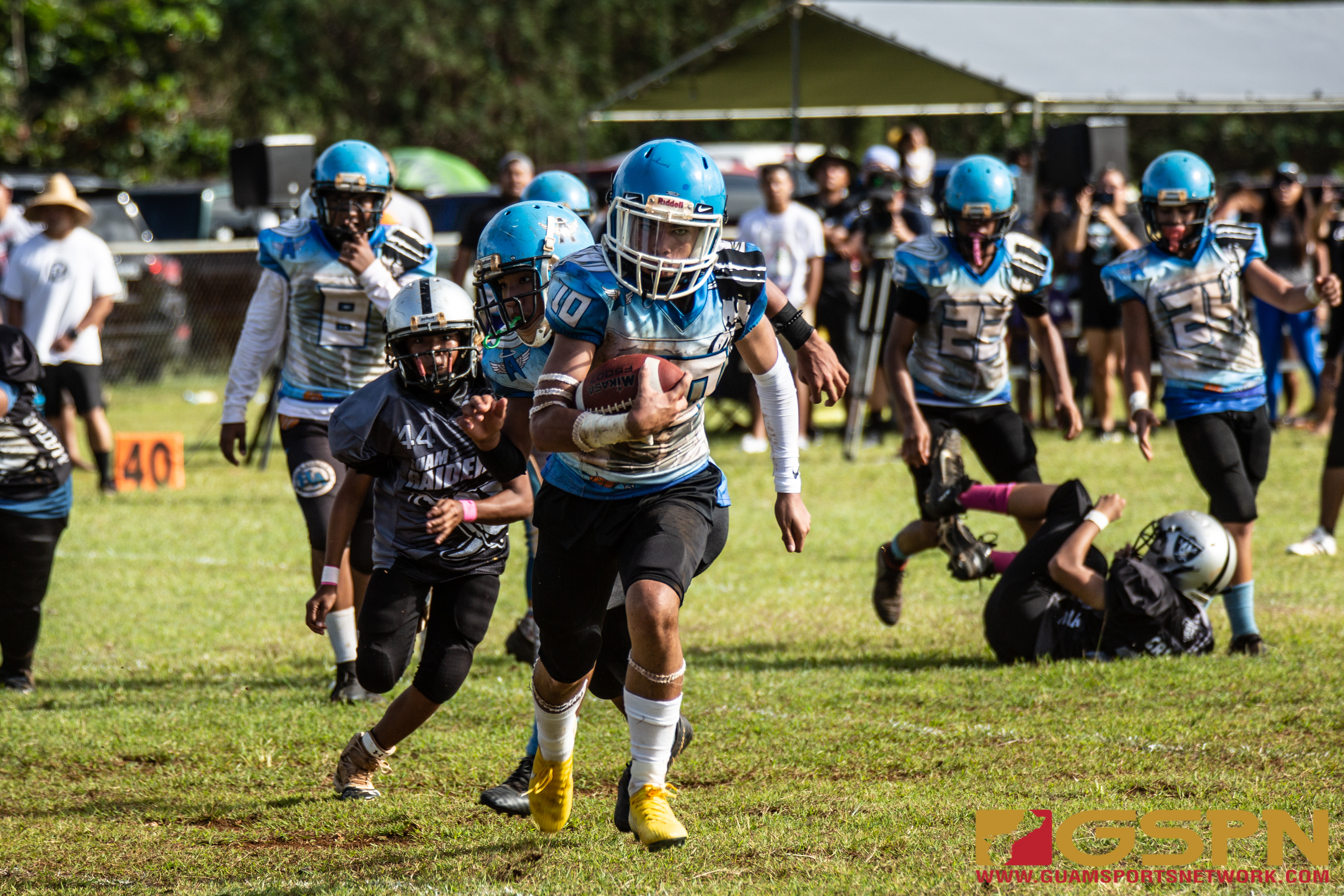 In the Matua Division for the GNYFF Football League, the Hals’ Angels were crowned Champions after dominating against the Raiders, pulling off a 34-6 victory at Cowboys Field in Talofofo on a hot Sunday afternoon. Quarterback Alex Sojo and receiver Aaron Johnson were instrumental in the victory, combining for four touchdown passes in addition to several deep bombs that got the crowd on their feet.

Sojo, who has not decided if this will be his last year in the Matua division elaborated on his 155 yard / four TD performance to close the season,

“This means a lot because we put in a lot of hard work during practice all season. This championship has been on our mind since the first day of practice and we never let our guard down. We pushed through the whole season and came out with the championship today,” said Sojo.

Up 6-0 midway through the second quarter, Sojo would look for his favorite target in Johnson, who he connected with earlier in the quarter to score the game’s first touchdown. On a quick slant route to the right side, Sojo found his man and his man found running room. Johnson used his speed to beat three defenders for a 50-yard touchdown.

The Angels opted for two and converted, up 14-0 with a few minutes left in the first half.

The lone touchdown for the Raiders was scored by their defense. A great punt by the Raiders placed the ball near the Angels end zone and the Raider defense capitalized. Pressure by the defense forced a fumble and Fermancio Garcia recovered the ball and ran it in for a score. The PAT was no good and the Raiders trailed 14-6.

The Angels would find the end zone one more time before the first half ended on a 25-yard touchdown pass from Sojo to Johnson, their third of the game. The Angels led 22-6 going into halftime.

Johnson, who will be moving on to play high school football next year, elaborated on his last game as an Angel,

“I felt good, I put in the work during practice. And I’m going to thank God because I couldn’t have done any of this without him. This championship means a lot because this was my last year with my boys and I’m really going to miss all of them,” said Johnson.

Despite the high score by the game’s end, both defenses did manage to put on a show for the crowd. For the Angels, Sage Castro had a key interception as well as Sojo. Linebacker Vance Meno finished with a sack, tackle for loss, and four tackles. For the Raiders, Henry Cruz had one interception and Ferstino Garcio had two tackles for loss.

The dagger that put the game out of reach came after the two-minute warning in the fourth quarter. A trick play in a shotgun formation was executed beautifully. An end around handoff then a flea flicker back to Sojo would confuse the Raider defense and leave Johnson wide open for a score.

The last touchdown of the game was scored by the Angels defense. The Raiders, wanting to get on the board one more time before the game ended, opted to air it out. Quarterback Makoa Duenas threw a long bomb but defensive back Jayven Mendiola was there to intercept, running it all the way for a score which also ran out the clock. The Angels secured the championship with a 34-6 victory.

The Raiders were missing one of their best players, as their starting quarterback was suspended for the championship because of an excessive celebration penalty in the semifinal game against the Outlaws.

Angels running back Noah Medler got hurt in the early minutes of action and at the end of the game was on crutches. Medler has been an instrumental player for the Angels all season. Although he was happy to see his team win, it was obvious that he was disheartened to not be able to finish the game off.

“We’ve got one of the youngest teams in the league, and also one of the smallest. It really means a lot, especially when we only had about 17 players. Because it’s a small team we don’t really have any subs, so most of these players are playing iron man. And they know their positions so well because we practice so often. The secret to success is grooming them when they’re young and keeping them within the organization so they can grow.”

Shiroma also gave his thoughts on how the GNYFF grooms players for the next step as high school athletes, “The GYNFF gives a special opportunity to groom the players for the next step. I’d say we’re almost like a feeder school for the high schools. We groom a lot of good players that go on to play in high school. Especially with FD and Sanchez, there were lots of good players that came from our Angel organization, Raider organization, and all of the other organizations around the league. We coach and teach them the game of football and hope that they do well in high school.”

Shiroma closed the interview tipping his hat to the Raiders organization saying, “The Raiders are always a tough organization to play. They play with a lot of heart and they are a good team. I tip my hat to the Raiders. All year long, they were the best team in the league. But one thing about our team is that we always peak right around the Championship, and that’s when things count.”